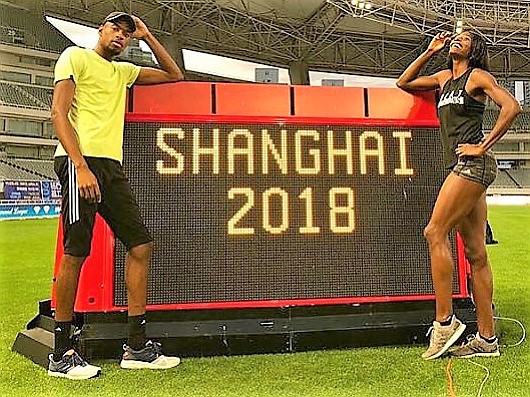 Gardiner, coming off his sensational world-leading 43.87 seconds in Doha, Qatar on May 4 at the first of the 12 Diamond League events before the two finals are held at the end of the year, pulled away for another fantastic performance as he took the men's one-lap race in 43.99.

In the process, the 22-year-old 6-feet, 2-inches Abaco native and former Moores Island student, erased the meet record of 44.02 that was set by American Jeremy Wariner in 2007 and tied by Grenada's Kirani James in 2013. The 2017 IAAF World Championship silver medalist is running both the 200 and 400m this year.

Once again, Gardiner beat a talented field that included Botswana's triple Commonwealth Games gold medalist Isaacs Makwala, who had to settle for second in a season's best of 44.23 after he got third in the first meeting of the three top performers in the world so far this year. Makwala switched places with Qatar's Abdalleleh Haroun, who was third in 44.51. Haroun, the World Championship bronze medalist, was second in Qatar.

As for Miller-Uibo, she made her 2018 IAAF Diamond League debut an impressive one. She ran away with the women's 200m in 22.06 for her season's best and a meet record, replacing the previous mark of 22.36 that was held by Nigeria's Blessing Okagbare-Ighoteguonor from 2014.

The 24-year-old 6-1 Miller-Uibo, a native of Nassau and a graduate of St Augustine's College, was just short of posting the fastest time in the world. She trails Okagbare-Ighoteguonor, who managed 22.04 in Abilene, Texas on March 24. Miller, the 2016 Olympic bronze medalist is coming off her triumph at the 2018 Commonwealth Games.

In securing her win, Miller-Uibo got the best of the much anticipated showdown against Netherland's two-time world champion Dafnee Schippers, second in her season's best of 22.34; Jamaican Commonwealth Games' silver medalist Shericka Jackson third in 22.36 and Ivory Coast's Marie-Josée Ta Lou, double silver medalist at the World Championships, fourth in 22.58. Ta Lou switched to the half-lap race after turning in a lifetime and world leading time of 10.85 in the century in Doha.

The next event on the Diamond League is the Prefontaine Classic at the Hayward Field in Eugene, Oregon from May 25-26 where Gardiner will have to move down to the 200m and Miller-Uibo will move up to the 400m. The Diamond League series closes out with the two finals at the Weltklasse in Zurich, Switzerland on August 30 and the AG Memorial Van Damme in Brussels, Belgium on August 31.