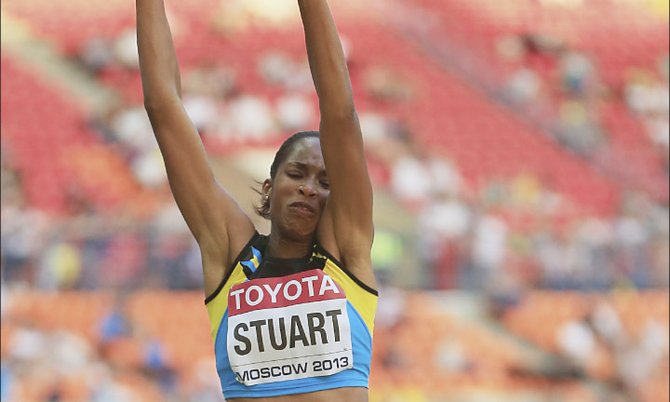 The team, including DeAnna Price, Brittany Riley, Jeneva (McCall) Stevens and Amarchi Ukabam, was selected by a 25-person committee (two representatives from each MVC member institution and a panel of five voters from the conference office). The voting panel determined a “Top-10” from a list of 25 finalists.

Stuart, a 2009 graduate at SIU, earned two All-America honours and was a seven-time MVC champion in the jumps, including the only four-year sweep of the indoor long jump in conference history. At the 2009 MVC Indoor Championships, Stuart broke the meet record with her jump of 21-6.25, a record that still stands. She finished 16th in the long jump at the 2016 Omypics and 18th in the event at the 2012 games.

Price was a two-time national champion in the hammer throw and a four-time All-American. She had one of the most dominant senior seasons in collegiate hammer throw history, winning her second NCAA hammer throw title with a meet record heave of 234 feet, 8 inches. She later captured bronze at the US Olympic Trials to punch her ticket to the 2016 Olympics in Rio.

Her throw of 239-9 at the trials was the furthest all-conditions throw in collegiate history. The four-time MVC champion went on to finish eighth at the 2016 Olympics, the seventh time in SIU track and field history that a Saluki alum has finished top-8 at the Olympics.

As a freshman, Riley broke the school record in the hammer throw to win the USA Track and Field Junior Championships. She advanced to the 2005 Pan American Junior Athletics Championships, winning a silver medal. A four-time MVC most outstanding field athlete, Riley’s name is all over the collegiate record books. She still holds the American Collegiate weight throw record and has eight of the top-10 marks in the event in NCAA history.

Stevens is one of the most decorated student-athletes in Saluki track and field history. She won three national titles, the most by an individual in the programme’s storied history, and was a three-time NCAA runner-up.

In 2012, the 13-time All-American won NCAA titles in both the weight and the hammer throw while also taking second in the indoor shot put. In doing so, Stevens was named the USTFCCCA Midwest Women’s Field Athlete of the Year, marking the first and only time that a student athlete from the Valley has earned the honour.

Professionally, Stevens became the first American woman to ever medal in the hammer throw in worldwide competition with her win in the event at the 2013 World University Games. She recently finished second in the shot put at the 2018 USATF Indoor Championships.