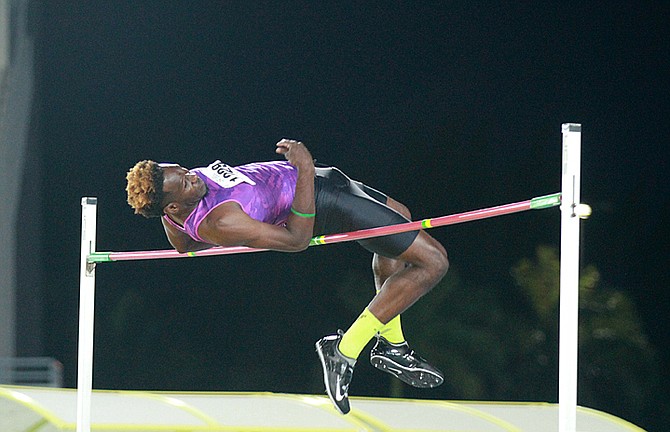 HIGH jumper Donald Thomas, picking up a victory, led another list of Bahamian elite athletes competing in a number of track and field meets over the weekend.

Their performances came as quarter-milers Steven Gardiner and Shaunae Miller-Uibo won the men’s 400m and the women’s 200m respectively at the Shanghai Diamond League in Shanghai, China.As the lone Bahamian competing at the Bale Mahault Meeting in Guadeloupe, Thomas soared 2.25 metres or 7-feet, 4 1/2-inches for his triumph in his specialty. He retained his title that he held in 2016 with 2.31m (7-7).

The men’s high jump was not on the schedule last year.

Tynia Gaither, the lone Bahamian at the Bermuda Invitational Permit Meet at the National Sports Centre in Devonshire, Bermuda, was fourth in the women’s 200m.Her time of 23.86 trailed American champion Jessica Beard, who won in 23.378.

Trinidad & Tobago’s Semoy Hackett got second in 23.50 and American Candyce McGrone was third in 23.64.

Teray Smith had the fastest qualifying time of the Bahamian male sprinters in the preliminaries of the 100m at the Pure Athletics/NTC Sprint Elite Meet in Clermont, Florida.

Smith also doubled up in the 200m where he finished second in his heat for fifth overall in 20.46 with former national record holder Michael Mathieu who was fifth in his heat in 20.81 for 10th overall. Cameron Parker, unattached, won his heat in 21.44 for 19th place.