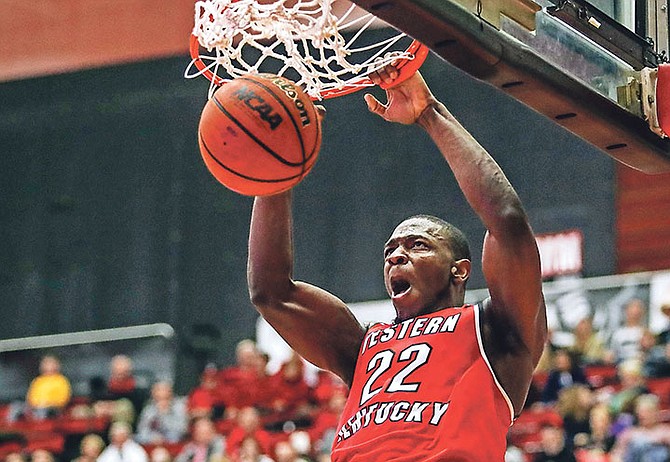 Dwight Coleby began his path to pro basketball with the first of his pre-NBA Draft workouts.

Coleby was one of several players hosted by the Utah Jazz in the second round of the franchise’s pre-draft workouts this week.

Utah has the 21st and 52nd overall picks in this year’s draft, hosted June 21 at the Barclay’s Center in Brooklyn, New York.

Walt Perrin, VP of Player Personnel for the Jazz said these workouts serve the purpose of discovering talent that may not be drafted but may have a place in the organization through summer league or the G-League.

“I try to conduct workouts outside of the top 60. We look at what we call the 61st pick and that’s for the Summer League or the [Utah] Starzz, so that’s what this workout was for, to take a look at some guys they might want to look at,” Coleby said, “There are some guys that have a great chance of playing with us in the future, if not next year.”

Jazz scouts got an early look at Coleby during the NCAA season.

He posted a double double in the final game of his collegiate career, but the postseason run for his Western Kentucky Hilltoppers ended in the National Invitational Tournament semi-finals in a 69-64 loss to the Utah Utes.

Coleby finished with 10 points and 13 rebounds.

WKU finished the season 27-11 and they achieved the programme's most wins in a decade. Their 38 games played tied the programme record and their three postseason victories also tied a school record as they advanced to the NIT semis for the first time since 1954.

“First coming here, it was a whole new team and we had to step up and be leaders," Coleby said.

"Normally we'd step in and someone was already the leader on the team. Coach told us we needed to be leaders. That's not really our personality to be outspoken and be leaders like that. We tried our best to help the team out."

They finished the season 4-2 against Power 5 conference schools.

Coleby averaged 11.1 points and 7.9 rebounds per game in his lone season as a graduate transfer in Bowling Green, Kentucky.

In his senior season with the Kansas Jayhawks, he averaged 1.7 points and 1.8 rebounds per game in his lone season in Lawrence after transferring from Ole Miss. He was already set to spend the 2015-16 season on the sidelines as a transfer but he suffered a torn ACL in his left knee during a light team workout in October 2015 and had to undergo a grueling rehab process.