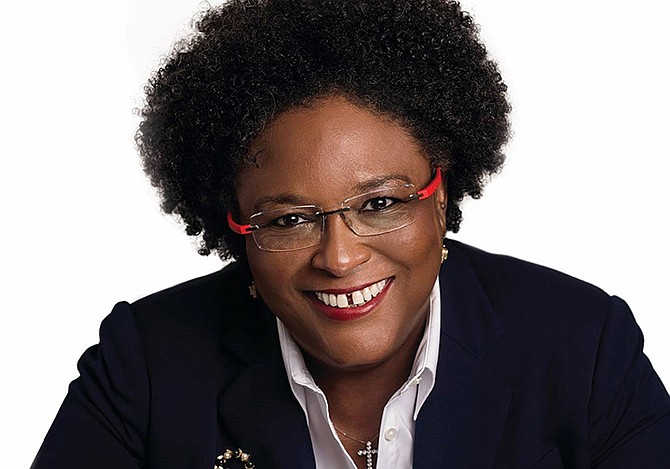 On May 24, 2018, Barbados elected its first female prime minister. Mia Amor Mottley led the Barbados Labour Party (BLP) to victory, winning over 74 percent of the votes. This election brought an end to ten years of governance by the Democratic Labour Party (DPL) led by Freundel Stuart since 2010. The BLP won all 30 seats in the House of Assembly—a first in the country’s history. Political parties in The Bahamas should look at the BLP’s campaign and collateral as there is a great deal that can be learned and practiced.

Mia Mottley, now the eighth prime minister of Barbados, has served as Leader of the Opposition in the House of Assembly twice and as Attorney General.

Her political career has been impressive since her entry in 1991 at the age of 26.

She has held ministerial portfolios including Education, Youth Affairs and Culture, Economic Affairs and Development and worked on a National Youth Development programme. Mottley also served as Deputy Prime Minister from 2003 to 2008.

She has now joined the ranks of other first female prime ministers in the English-speaking Caribbean—Dame Eugenia Charles of Dominica, Janet Jagan of Guyana, Portia Simpson Miller of Jamaica, and Kamla Persad Bissessar of Trinidad and Tobago.

The Barbados Labour Party ran a campaign focused on the main issues of concern with significant emphasis on the economy. In the lead-up to election day, the party reminded voters of its values and commitments. The DLP, on the other hand, resorted to cheap tactics, including a speech from former Minister of Environment and Drainage Denis Lowe stating “the Barbados Labour Party is led by a self-proclaimed wicker.” (“Wicker” is a Barbadian pejorative for “lesbian.”) He claimed she “doesn’t have any liking for men, except those men who don’t have balls,” and the men in the BLP have been neutered. The DLP put its energy in the wrong place, expecting fear and hatred to rule the ballot.

The BLP has worked to be transparent and involve citizens in the governance of Barbados. In January, the party shared its draft Integrity Commission Bill, calling on the public to offer comments which would be considered.

It noted enactment of the bill would be a matter of priority if elected. In her statement on the occasion of Barbados’ 51st Independence, Mottley committed to a journey of “certainty, consultation and a common goal that brings everyone on board.”

The messaging from the BLP was consistent, calling for everyone to work together to bring a collective vision to fruition.

The BLP manifesto, while short on detail, is easy to read and digest. The two-part document separates long-term goals from the more immediate agenda to be carried out in the first six months. The latter includes rebuilding foreign reserves, dealing with debt, tax relief, improving sewerage systems, putting buses back on the road and preparing for natural disasters. The list includes action points for each of the 17 items which give an idea of what road the BLP intends to take.

The transformational agenda for the five-year term is divided into pillars—Better Society, Strong Economy, Good Governance, Repair and Renewal (of infrastructure), Blue and Green Economies, and Engaging the World. The party’s website allowed people to view sections based on their identities such as youth, senior citizen and middle class, and had an audio version which made the manifesto more accessible.

Recognizing one of the largest voting blocks, the BLP made a youth-specific manifesto available on its website, making it easy for young people to see its intentions. In this blueprint, the six-month rescue plan is set out in three steps—fix the economy, fix infrastructure and create opportunity. These are later divided into more specific steps like lowering the cost of living through measures including the abolition of road tax and repeal on the municipal solid waste tax and returning free UWI tuition to Barbadian students.

The second phase of the plan goes beyond the first six months with sections called live (including health and the justice system), learn (including prioritization of STEAM), create (including a talent showcase), do business (including procurement), play (including entertainment), work (including the development of new industries), and dream (including the creation of citizen wealth). At the end, it offers information for first-time voters.

The success of the Barbados Labour Party and its campaign and collateral are indicative in a necessary shift in the culture of politics in Barbados and throughout the region. Party loyalty is almost non-existent. Citizens are not interested in petty back and forth arguments on rally stages.

People are beginning to understand the importance of civic participation that goes beyond the casting of ballots. Good governance has been a requirement and political parties are being called to exercise it within their internal systems. Personal attacks sully the names and characters of the people launching them. Voters are paying attention to track records, plans and the level and frequency of engagement.

The BLP win and Mottley’s win feel good. They feel like progress. They seem like a change with a promise to never go back. Still, there are unknowns and there are harsh truths that must be faced.

Barbados has its first female prime minister, but still only has six women in the House of Assembly. In its manifesto, the section on gender equality has only four points—equal pay for equal work, paternity leave, male participation in tertiary education and female entrepreneurship. These leaves a lot to be desired. There is, for example, no mention of women’s political participation or the introduction of a quota. It must be noted that it could be difficult for Mottley to push a women’s rights agenda. Being a woman and the prime minister is not a panacea. Women’s rights advocates have to continue their work and the press for progress.

Like having a female prime minister for the first time, a clean sweep feels good. It is an undeniable victory and a clear message from the nation. This has its own challenges and The Bahamas is becoming familiar with them.

There is nothing to celebrate in not having an opposition, and it is critical the people resist the inclination to relax and believe all will be well and their jobs are done. The lack of opposition makes the role of the citizen even more critical. There will likely be no one in Parliament to see and hear the questionable and make statements to the press that will inform the public.