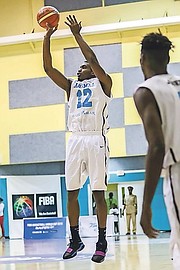 NATIONAL team member David Nesbitt and his Paulistano Sao Paolo took a 2-1 series lead in the Novo Basquete Brasil (NBB) finals and moved one game closer to the league title.

Nesbitt came off the bench to finish with eight points and five rebounds in an 88-84 win over Mogi. He was a perfect 6-6 from the free throw line and as a team, Paulistano shot 23-29 at the stripe. They also had 15 made three-pointers at 52 per cent.

Paulistano opened the series with a 99-82 win in game one. Nesbitt finished with six points and five rebounds in 28 minutes.

Paulistano took an early 30-14 lead at the end of the first quarter and led 52-23 at the half. Mogi won the third quarter by eight but never threatened in the fourth.

Mogi took game two with an 84-70 win, their first win over Paulistano in five meetings this season, dating back to the regular season.

The NBB is the Brazilian premier professional men’s basketball league.

In the opening round of the playoffs, Paulistano defeated Cearense 3-1 and outlasted Bauru 3-2 in a pair of best-of-five series.

This season Nesbitt averaged 8.3 points and 6.3 rebounds per game on 55 per cent shooting from the field. He played last season for Ciclista Olimpico de La Banda in the Argentinian LigaA.

Nesbitt spent the previous season in the Iraqi Superleague with Al Mina. He helped them to win the regular season and make it to the final. He was also voted to Asia-Basket.com’s Iraqi League All-Imports Team and All-Second Team. He has also played professionally in Kazakhstan for Kaspiy Aktau.

Most recently, he participated with the men’s national team at the FIBA World Cup Americas Qualifiers where he averaged 6.1 points and 5.8 rebounds through the first two windows. Game four is scheduled for June 2.