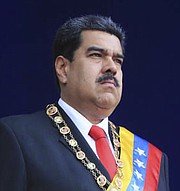 Accounts at two Bahamian banks, alleged to contain bribery proceeds from a massive $1.2bn money laundering scheme tied to top Venezuelan officials, are targeted for seizure by the US government.

Court documents obtained by Tribune Business reveal that US federal authorities want to seize assets held in bank accounts with Deltec Bank & Trust and Ansbacher (Bahamas) as part of a crackdown on corruption linked to the Nicolas Maduro-led regime.

The planned Bahamas seizures relate to $12m in bribes that a senior executive at PDVSA has admitted to receiving for his role in helping to loot, and asset strip, Venezuela's state-run oil company of millions of dollars.

Abraham Edgardo Ortega, who was PDVSA's executive director of financial planning, in his plea agreement with US authorities agreed to forfeit "all assets on deposit in account/portfolio number 1303311-00 at Deltec Bank & Trust in Nassau, The Bahamas".

And he committed to doing similar with "all assets on deposit in account number 200020600 at Ansbacher Ltd in The Bahamas, held in the name of Greatwalls FS". There is nothing to suggest that Deltec, Ansbacher and their respective executives/Boards have done anything wrong in relation or Ortega or the wider money laundering scandal.

However, the US asset seizures are especially ill-timed for The Bahamas given its recent placement on the Financial Action Task Force's (FATF) monitoring/watch list of 11 nations who have strategic deficiencies in their anti-money laundering/counter terror financing regimes.

They also highlight the risks facing The Bahamas and its financial services industry in conducting business with Latin America, a region that this country is increasingly targeting, and especially Venezuela amid that country's economic and social breakdown that has seen millions of its citizens migrate.

Ortega's plea bargain is linked to the same events that saw Matthias Krull, who was previously bound for a private banking job in The Bahamas, sentenced to 10 years in a US federal prison at the end of October.

Krull, who was set to start his new job as a Gonet Bank & Trust (Nassau) managing director before year-end 2018, also admitted his role in facilitating the plan by corrupt Venezuelan government officials to loot PDVSA and enrich themselves at the expense of that country's people.

Ortega, for his part, besides aiding the same scheme Krull was involved in, also accepted $5m in bribes in return for securing "priority" status for French and Russian companies in reaching agreements with PDVSA to resolve monies owed to them on their joint venture deals.

The Bahamian bank accounts were used to disguise and launder the bribe payments to Ortega so that they would appear to be clean. Documents filed with the south Florida court reveal that a key role was played by Gustavo Adolfo Hernandez Frieri, principal of a Miami-headquartered financial services brokerage.

He and Ortega, together with a confidential informant (CS) working for the US government, met in Panama in April 2016 to discuss how the $5m "priority" status bribes could be concealed and washed clean, so the "funds would appear to have been legitimately acquired".

Hernandez Frieri suggested his "fake mutual fund", a Cayman Islands-domiciled entity called Global Securities Trade Finance, as the ideal vehicle. He explained it took in money like a normal investment fund to make payments seem legitimate, but then immediately transferred them out, making it appear as if a redemption had been requested.

"On February 24, 2017, the CS instructed Deltec Bank & Trust in Nassau, The Bahamas, where a portion of Ortega's illicit funds were then held, to subscribe to the fund," Ortega's plea agreement reveals.

"On or about February 28, 2017, at the direction of Ortega and Hernandez Fieri, approximately $5m was transferred from an account/portfolio number at Deltec Bank & Trust" to a US financial institution in New Jersey, which held an account for Global Securities Trade Finance, the fake fund.

The $5m was then transferred to another unnamed US financial institution, with the "fake subscription in Global Securities Trade Finance deposited [back] at Deltec Bank, thus making the $5m available to Hernandez Frieri for distribution to Ortega".

Ortega's plea agreement also revealed that Hernandez Frieri "assisted in opening an account in The Bahamas and transferring the balance of Ortega's funds... to that account" from a US financial institution, representing the $7m balance of the $12m bribe payments received by the former PDVSA executive. The Bahamian bank is not named, but its mention in the US court filings indicates it is likely to be Ansbacher.

Deltec Bank & Trust, meanwhile, has become embroiled in the controversy surrounding Tether, the financial technology (Fintech) company whose tokens - unlike traditional cryptocurrencies - are said to be backed by actual fiat currencies such as the US dollar on a one:one basis.

That "peg" has been under pressure in recent months amid increasingly volatile trading, with Tether's "token" slipping below the one:one US relationship with the US dollar. Investors have also expressed concern over the company's transparency and liquidity, amid uncertainty over its banking relationships.

Tether, though, sought to allay these fears by producing a November 1, 2018, letter from Lyford Cay-based Deltec Bank & Trust, in which the Bahamian institution said "the portfolio cash value" of its account with it stood at $1.831bn at end-October.

Deltec disclaimed any liability associated with the letter, though, and the document has been questioned since there is no named signatory from the bank listed on it.

Tether, though, said in a statement: "Tether Ltd is pleased to confirm that it has established a banking relationship with Deltec Bank & Trust, a 72-year-old financial institution with headquarters in the Commonwealth of The Bahamas.

"The acceptance of Tether Ltd as a client of Deltec came after their due diligence review of our company. This included, notably, an analysis of our compliance processes, policies and procedures; a full background check of the shareholders, ultimate beneficiaries and officers of our company; and assessments of our ability to maintain the US dollar peg at any moment and our treasury management policies."

He was there for a year then left for Graham Thompson Law firm where he's been since 2015.

Pinder went to Deltec for a while but ended up at the Graham Thompson law firm. As for Ansbacher bank, it's really mostly owned by the Greek guy who owns most of the Colina companies and a law firm. Someone said the Greek guy's son is the chief honcho at Ansbacher. Small wonder the OECD, FATF, etc. never let up on bashing our financial services sector.

So what will the US do with this money? will it be returned to Venezuela, or will it go into Donald trump's coffers? If the latter, then it should be shared with the Bahamian government.

Didn't you know they are, among things, the self-appointed Money Police, Judge, Jury and Executioner? They don't like to share either.

Well might is right. America has the power to do all those things so they will, anyone else who had it would do the same thing.

He did after retiring as Minister of Finance, but as far as I can tell he left after a year and has been with Graham Thompson law firm since 2015.

Venezuelan Petro caribe funds of over 3 billion dollars missing from Haiti sparked riits about a month ago wid hundreds rioting.

I suspect the PLP have a setup similar to this one, as do the FNM, in a bank in Panama. USA Gov, thankyou for locating the funds stollen from the starving people of Venezuela. Now, please locate the funds stollen from the Bahamas Treasury on behalf of the Bahamian people and have it returned to us. The only way corruption will ever be punished in this country is if America does it for us and it is irrefutable!

With S$&T like this going down, the Bahamas deserves to be on every OECD and FATF blacklist. I hate corruption!!!!! I hate it when governments steal from their people, especially when their people are dirt poor!!!

"There is nothing to suggest that Deltec, Ansbacher and their respective executives/Boards have done anything wrong in relation or Ortega or the wider money laundering scandal."

That comment is significant as it would appear that no accusations, of wrong doing, have been made against The Bahamas in this matter.

Right...now just try tell that to the OECD, FATF, etc.

Whenever there is instability in any part of da world...its common sense to be wary of large or any aamounts of funds seeking safe havens....