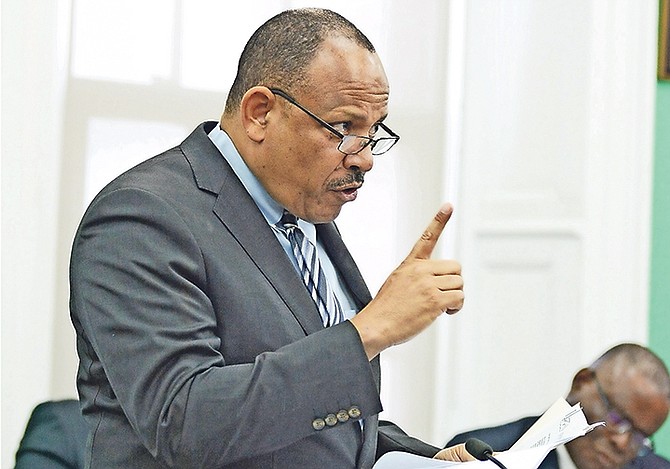 All doctors, healthcare facilities and insurers must cut their fees if the revised National Health Insurance (NHI) model is to succeed and be financially viable, a Cabinet minister has warned.

Dr Duane Sands, minister of health, told Tribune Business that "compromise" over service charges and pricing was required at "every step along the healthcare delivery pathway" for the NHI scheme to be sustainable.

In return, he said healthcare providers and insurers will gain access to a "massively expanded market" through NHI's broadening of coverage to Bahamians who were previously unable to afford private medical coverage and/or go outside the public system.

"In order for this thing to be workable, there has to be compromise at every step along the healthcare delivery pathway," Dr Sands confirmed to this newspaper. "It could certainly not exist if we maintain the cost structure we have now.

"The expectation is that everybody ought to look at shaving some part of their rack rate. That includes practitioners, insurers, insurance brokers; everybody along the path in exchange for a massively expanded market.

"When you're talking about a market that is currently 33 percent, and could in short order be 55 percent and, ultimately at 90 percent depending on the pace of enrollment, I think this augurs well for every stakeholder in the delivery of healthcare services." There was no mention of how much fees for both providers and healthcare facilities may have to be cut.

The NHI policy paper, released to kickstart public consultation on the revised scheme's merits, underscores the Government's belief that mandating private health insurance for all working Bahamians via a phased roll-out will expand coverage levels from the present one-third of the population to 55 percent by 2022.

To achieve this, and finance healthcare for the unemployed, retirees, children and those with pre-existing illnesses, the Government is attempting through NHI to transform the pricing and cost structure for the provision of medical services throughout The Bahamas.

Dr Sands confirmed as much when this was put to him, with the proposed NHI scheme set to switch doctor and healthcare provider compensation from a margin/price-driven basis to one largely dictated by volume.

The Minister said NHI was seeking to move Bahamian healthcare away from "the old-fashioned concept" of fee-for-service, where providers at every stage of the treatment process levied their own charges, to "a global fee that is outcome-based".

He added that such a system, in effect, rewarded patients "that did poorly", and said: "We're trying to change that model.

"There's tremendous cost shifting in The Bahamas," Dr Sands affirmed, "where typically private patients pay a premium that allows for the delivery of services to public patients.

"What ends up happening for those physicians that straddle the public and private sectors, like myself, is that 60-65 percent of clinical volume was in the public sector. But the vast majority of my income was generated in the private sector from 35-40 percent of the client base.

"What that means is if we have an even sharing of costs/charges across all patients, as we have in other systems, we will find industry rack rates drop. It's why there's such pressure to move Bahamian patients into the south Florida market as the rack rates for physicians and facility fees in the networks there could be lower," he confirmed.

"In a situation where we have reasonable co-operation from all at significantly reduced rates, the net return for all participants in the industry will improve."

Dr Sands said transforming the pricing and cost structure of Bahamian healthcare through NHI will lead to the Government's ultimate goal - improved medical care for more Bahamians that results in better outcomes and a healthier, more productive population.

"It will have some positive effects of decreasing the cost of healthcare services in general and improving the quality delivered to most patients and, hopefully, eliminating discrepancies in outcomes between the public and private health sectors," he told Tribune Business. "Improving the quality of care received by most, if not all, patients in the Commonwealth of The Bahamas - that, ultimately, is the goal."

Dr Sands' warning that healthcare fees must reduce across-the-board for NHI to work will come as no surprise to the Bahamas Insurance Association (BIA) and its members, which anticipated this outcome in their response to the scheme last week.

It suggested then that the Standard Health Benefit (SHB), NHI's minimal benefits package, could only be kept at a $1,000 annual premium if the fees charged by healthcare providers and facilities were "materially lowered".

"The BIA has maintained that there is a strong correlation between private health insurance premiums and healthcare costs," the Association said. "The delivery of affordable quality healthcare via the SHB, with an annual premium of $1,000, may only be achievable if the facilities and providers' fees are materially lowered."

The NHI Authority, the body that will oversee and administer the revised scheme, has yet to negotiate the fees structure with doctors and healthcare facilities in either the public or private sector, making it impossible to determine whether the SHB's proposed premium - to be split between employer and employee - will be sufficient to cover all the services and treatments proposed.

Emmanuel Komolafe, the BIA's chairman, agreed with Dr Sands that "the fee schedule has to reduce much lower than obtains in the private sector currently" for NHI to be financially sustainable.

Echoing last week's BIA position paper, he told Tribune Business that once agreed NHI's charges must become "the universal fee schedule for The Bahamas" in both the public and private healthcare sectors.

"There has to be, on both sides of the discussion, negotiation on the fees," Mr Komolafe said. "The real number one point is the cost of healthcare; it drives everything else.

"When you're talking about health insurance premiums, and the calculation and determination of what they will be, the main factor is the cost of healthcare, which accounts for between 75 percent to 85 percent of the premium cost.

"Sometimes, in terms of loss ratios, it can be up to 90 percent. You then add in your administrative costs, salaries, and broker and agent commissions that are created to operate the business sustainably."

Based on such a structure, the BIA chairman argued, the only way to reduce healthcare costs to the level demanded by NHI is to either reduce the benefits/services offered to Bahamians or cut prices and fees.

Dr Sands, meanwhile, said NHI's expansion of health coverage to most Bahamians will force healthcare providers and facilities to "up their game" in terms of care quality and standards if they are to retain patients.

He added that NHI would give insured Bahamians "tremendous buying power that has the ability to improve standards at every provider" as a result of their ability to switch between doctors of dissatisfied with care outcomes and service.

"If you want to attract people to your practice you will have to step up your game, make investments, make the facility more attractive, reduce the length of stay, complications and so on and so forth," Dr Sands said.

We need to cut the size of government and the size of our illegal immigrant population too....but you won't hear Sands talking about that. Lawyer-politicians running the country was bad enough, but these doctor-politicians are in a league of their own when it comes to their outright dishonesty and stupidity.