'I Will Be De-Committing From Indiana University' 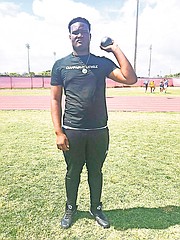 BAHAMIAN high school gridiron star Michael Cartwright re-entered the recruitment cycle and is once again one of the most highly sought after offensive lineman prospects in the state of Florida.

Cartwright de-committed from the University of Indiana Hoosiers and during his final season for the Champagnat Lions in Hialeah, Florida, is once again eligible to join one of the many NCAA Division I football programmes seeking his services.

"I would like to thank Indiana for recruiting me during my recruitment process and the entire Indiana coaching staff for making me feel like family the whole time," he announced via social media. "But today I will be de-committing from Indiana University and reopening my recruitment for me to re-evaluate everything and to make the best decision for me as a person, player and most importantly a student."

Cartwright announced his commitment to join the Hoosiers last July.

The Lions are currently 5-5 and will face Miami Christian tonight in the Florida High School Athletic Association Class 2A Tournament.

Cartwright, a former student at Aquinas College, has also blossomed into a three-sport star for the Lions. On the basketball court he averaged 12.6 points and 15 rebounds per game and in athletics, he became the school's first multiple district champion in the shot put.

Cartwright was also a member of the Bahamas' 2016 Caribbean Basketball Confederation under-16 team that won gold in the British Virgin Islands.