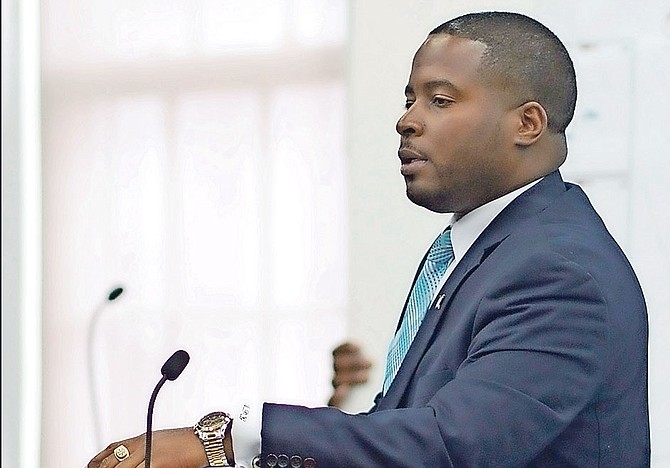 The Government “will not stand by” and allow Nassau’s water supply to be disrupted by debts owed to the Water & Sewerage Corporation’s main supplier, its executive chairman has pledged.

Adrian Gibson moved swiftly to reassure New Providence residents and businesses that a payment plan was in place after BISX-listed Consolidated Water warned of potential supply interruptions to thousands of customers unless a $16.1m bill was paid.

He added that “the bulk” of the debt owed to Consolidated Water, which supplies virtually all of the corporation’s New Providence customers from its Blue Hills and Windsor reverse osmosis plants, had been accrued under the former Christie administration and was a problem inherited by its successor.

“Residents of New Providence should know there will be no disruption in water supply,” the Long Island MP told Tribune Business, “and that the Government and corporation will not stand by and allow the water supply to its citizens to be interrupted by anyone.

“The Ministry of Finance has agreed with the Water & Sewerage Corporation to implement an arrears reduction plan, but much of this debt was inherited and incurred during the last administration.”

Some $7m, or 43.5 percent of the debt owed by the Water & Sewerage Corporation, was incurred during the first nine months of 2018 according to Consolidated Water’s regulatory filings with the US Securities & Exchange Commission (SEC), covering a time when the Minnis administration was clearly in office.

Mr Gibson, meanwhile, declined to comment further, but said the Water & Sewerage Corporation planned to release a more detailed response shortly to Consolidated Water’s warning that its Bahamian subsidiary will lack the financing “to continue normal operations” unless the Government sticks to a proposed payment plan to settle what is owed.

The company, in announcing its third quarter results, said the debt had risen by 76.9 percent this year alone compared to the $9.1m that was due at end-December 2017, and this was already “adversely impacting the liquidity” of Consolidated Water (Bahamas).

Besides the $13.7m invested in rehabilitating its Windsor reverse osmosis plant and a similar facility in the Cayman Islands, Mr Sasnett added: “The second factor affecting our cash position is the increase in accounts receivables balances owed by the Water & Sewerage Corporation in The Bahamas.

“It’s important to note that the Windsor plant is completed. Based on recent conversations with the Ministry of Finance, we expect our collection of accounts receivables balances in The Bahamas to increase in the coming quarters.”

Rick McTaggart, Consolidated Water’s president and chief executive, told financial analysts on the same conference call that the company’s capital investments had transformed Windsor into “one of the most energy-efficient plants in the world for its size”.

He added that the diesel-powered pressure pumps produce “higher reliability and better rates” for the Water & Sewerage Corporation and its New Providence customers, with the commercial arrangement between the two sides for a facility producing 2.6m gallons per day lasting through 2033.

While conceding that successive governments had always made good on its outstanding bills, which have peaked at similar amounts in the past, Consolidated Water’s latest SEC filing struck a more urgent tone - and effectively amounted to a warning to the Minnis administration.

It added that if the Ministry of Finance “does not adhere” to the proposed payment plan submitted to it, and/or the corporation continues to be “significantly delinquent” in paying its bills, its Bahamian subsidiary would suffer several adverse consequences that could impact water supply to thousands of New Providence homes and businesses.

“In October 2018, the Ministry of Finance provided CW-Bahamas with a proposed payment schedule to pay Water & Sewerage Corporation’s delinquent accounts receivable balance as of September 30, 2018, in full by June 2019.”

Then came the warning: “If the Ministry of Finance does not adhere to this proposed payment schedule, or the Water & Sewerage Corporation continues to be significantly delinquent in paying Consolidated Water (Bahamas) invoices, then in the coming months one or more of the following events may occur.

It will not only be Water & Sewerage Corporation customers feeling the effects if this worst-case scenario comes to pass. Bahamian shareholders of Consolidated Water, who hold its shares through Bahamian Depository Receipts (BDRs) listed on BISX, may also see an impact on their investment’s earnings and dividends.

The Consolidated Water filings may also shed new light on the reasons behind the Water & Sewerage Corporation’s recent mass disconnection exercise across New Providence and the Family Islands, as its bids to recover up to $45m in accounts receivables owed to it by delinquent customers - a significant chunk of which will likely have to be written-off - to improve its financial position.

They also indicate that a further taxpayer ‘bail out’ of the cash-strapped Water & Sewerage Corporation may soon be forthcoming on top of the annual $20-$30m it typically receives in the annual Budget, which is a product of operational inefficiencies and the continued selling of water ‘below cost’.

Hard to say that either administration is better than the other. It is a culture of malfeasance that exists. How we gonna fix that?

Water is to cheap and yes there are those on really hard times but many of those not paying have an expensive car outside, cell phones and expensive clothes.

Adrian Gibson needs to have his head examined.....in fact he should just be fired and the sooner the better. The imbecile does not seem to understand that a valid debt is a debt to be paid no matter whether it was incurred by a previous government administration. Gibson oozes incompetence. LMAO

"He added that “the bulk” of the debt owed to Consolidated Water, which supplies virtually all of the corporation’s New Providence customers from its Blue Hills and Windsor reverse osmosis plants, had been accrued under the former Christie administration..."

How are people supposed to believe these kinds of statements when no government PLP or FNM will give us an accounting of where are money goes. A budget is just a plan. We want ACTUAL expenditure info.

This would have already been known.

We can only GUESS why they won't say what they do with our money. I have my guess.