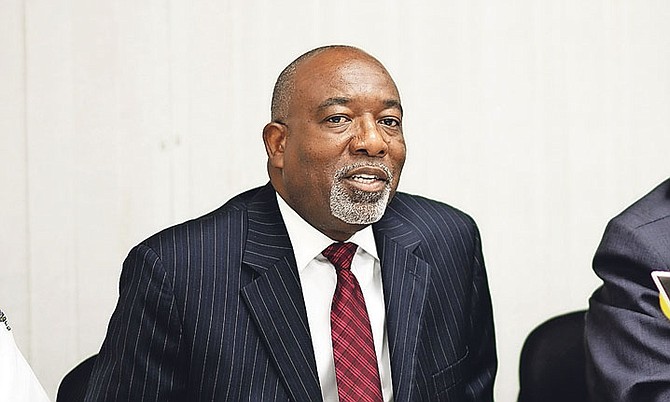 FORMER Immigration Director William Pratt said yesterday he was seeking legal redress in response to “loose, untested allegations” in reference to him in an affidavit detailing the Federal Bureau of Investigation’s probe of an alleged local US visa scam.

The affidavit of special agent Kevin Gounaud details conversations the scam’s alleged lead conspirator, Edward Israel Saintil, had with undercover FBI informants. Saintil allegedly boasted of having relationships with top immigration officials. He also alleged that immigration staff did not process work permits without being paid to do so.

According to the FBI, Saintil claimed he had a relationship with Mr Pratt and Immigration Director Clarence Russell. Another senior immigration official is referenced in the affidavit.

The former director maintained his innocence and defended his tenure at the Department of Immigration in a press statement issued yesterday.

“I have never sold or received bribes for any permits or anything else in my five years as director,” the statement read.

“I have never met Edward Israel Saintil. I never knew what he looked like until a photo produced to me online purporting to be him was shown to me. I stand by the integrity of any decision made by me with regard to work permit or immigration applications. These applications are considered based on information that is received which must justify the request.”

Mr Pratt’s statement continued: “I have never met him. I have never had any dealings with him or any other person in an illegal, unlawful conduct of any kind.”

The FBI’s undercover operation kicked off in 2016 after agents were tipped off to claims a Haitian national living in the Bahamas - Edna St Fleur - had obtained a US visa fraudulently.

St Fleur, along with two other Haitians and a Bahamian woman, were also indicted in a separate case for allegedly conspiring to commit visa fraud.

Saintil, a purported justice of the peace who was said to hold both Bahamian and Haitian citizenship, is currently on bail in a high intensity supervision programme pending trial in Washington.

Saintil pleaded not guilty to the charge of encouraging and inducing illegal entry into the US.

According to the affidavit, the scheme involved Bahamians being paid to write fraudulent letters for immigrants purporting to be employers that would be used as documentation for work permits. The affidavit alleged these work permits were not for actual employment in the Bahamas but to facilitate the granting of US visitor visas.

He said Mr Gounaud’s affidavit was replete with hearsay, insisting it was “unjust” for such allegations against his character and integrity to be put in the public domain without giving him an opportunity to refute it.

“The damage has been done and now it is left for me to use my personal resources to seek redress by having to prove a negative,” Mr Pratt’s statement read.

“I am appalled. I denounce this and reject it. I will seek whatever legal means are available to me to have this set aside.”

Meanwhile Progressive Liberal Party Chairman and opposition Senator Fred Mitchell has called on the government to directly address the allegations, particularly the nature of the “scandalous and defamatory” claims against senior public servants.

Mr Mitchell, who would have been minister of immigration when the FBI’s probe began, suggested the claims may have negative consequences for named individuals at the local embassy or in the US given the “subjective nature” of American immigration law, and noted officials had no legal redress.

Mr Mitchell advised the government not only to ask the American government for an explanation, but also protest the matter.

“The question must be asked by our government,” Mr Mitchell said, “how could in the US jurisdiction a document be produced in court which clearly alleges malfeasance in office against named individuals, be allowed to surface with untested hearsay evidence in it?”

Mr Mitchell continued: “In other words the names of persons are called, serious accusations are made against them purporting to be the truth of their contents. There is no evidence to support the allegations. I am advised that none of the persons whose names were called had an opportunity to defend themselves, yet their names are now scandalised.

“At the very least this must be protested by the government for the record and the names of its public servants defended,” he added.

The Tribune has reached out to both the US and Haitian embassies for comment on the developing story. A US embassy spokesperson told The Tribune the agency did not comment on ongoing investigations. The Haitian embassy has not responded to inquiries made by this newspaper.

It is common street knowledge that if you want anything done in Immigration it requires: A. A friend or acquaintance with pull. B. Knowing the right channels through which to pay tips. The thing is, most government departments do not consider tipping as being bribery, but rather an entitlement to them as a part of their jobs. An honest (don't know how that can be achieved) audit of immigration files would reveal exactly what went on in the forms of work permits, spousal permits (divorced spouses are still working in some cases), residency and citizenship approvals. Will this ever happen? Doubtful. Foreigners are occupying in positions which can be filled by qualified, unemployed Bahamians, as a result of unscrupulous administrators of the Immigration Laws.

I believe you are right in saying "Foreigners are occupying in positions which can be filled by qualified, unemployed Bahamians'

I'm not convinced that our people are really wanting to address this problem.

After all, if someone wants to hire a foreigner , over a Bahamian, it's very telling, in fact an indictment of our very people.

Why would someone pay more, and deal with issues of having a foreign employee rather than have a local Bahamian do the work.

Wanna deal with the foreign worker issue, deal with the real problem, our people, and then, we will be able offer them a better option, until then, they will continue to hire foreign.

Look. If you are the director, the guy at the too of the pile and this happens. You are culpable and should be held responsible. If happened on his watch he wasn't doing his job or he was involved. Either way heads must roll

William Pratts' "I'Ll Fight 'Unjust Allegations'" in itself is an admission of guilt. An individual free of guilt has nothing to fear because there is nothing to fight.

Chances of Pratt or anyone in immigration oversite positions having clean hands as "easy" millions were passing hands all around them 24/7/365 for decades is about the same as Bahamians being stupid enough to return Perry Christie and Hubert Ingraham as prime ministers again!

MR' Pratt until proven otherwise. I believe you are innocent. There are many good upstanding people in the Bahamas,,..,

As far a what Mr Mitchell thinks / says:

Some think you are a scumbag

Some think you a full on corrupt

But you should know that realistically you are what people think of you. I.e. If 10 people who know you well (or the whole population) think you are "x", then you are "x"!