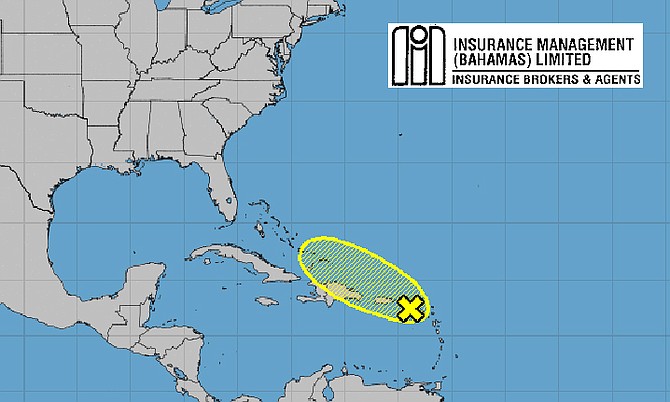 UPDATE: The National Hurricane Center in Miami has issued the following update on the tropical wave: Disorganized showers and a few thunderstorms extending from the Leeward Islands to Puerto Rico are associated with a tropical wave interacting with an upper-level low. Significant development of this system is not expected due to unfavorable upper-level winds and interaction with the islands of the Greater Antilles. Regardless of development, this system is expected to bring locally heavy rainfall to portions of the Leeward Islands, the Virgin Islands, and Puerto Rico over the next couple of days as it moves generally westward to west-northwestward.

WEATHER officials are monitoring a system that has developed in the Atlantic Ocean and has The Bahamas in its sights.

The tropical wave has formed east of the Lesser Antilles.

On Sunday, the US National Hurricane Centre said about the system: "Showers activity has increased and (it should) become a little better organised today in association with a tropical wave located bout 350 miles east-southeast of the Leeward Islands. Environmental conditions are forecast to gradually become more conducive for development by Tuesday, and a tropical or subtropical cyclone is expected to form by the middle of the week. The system will move westward to west-northwestward for the next few days, passing near or north of the Leeward Islands, Puerto Rico, Hispaniola, and the southeastern Bahamas."

The official said the system could develop into a tropical cyclone though weather models are uncertain what path it will take.