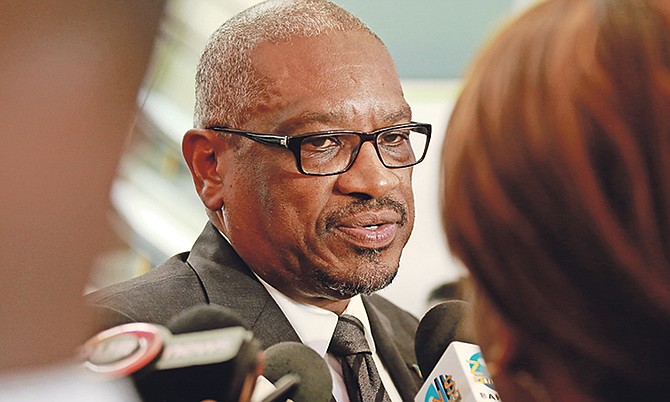 PRIME Minister Dr Hubert Minnis yesterday described the work of the news media as "essential", following persistent allegations that he is anti-press.

Dr Minnis said he does not engage with such rumours, adding he will hold his long-promised quarterly briefings with the press "when the time is right".

These comments came one day after an incident where a police aide to the prime minister swatted away reporters' microphones in Dr Minnis' presence.

Following a Cabinet tour of the new Fusion Superplex entertainment facility, Dr Minnis was asked to respond to criticism that he does not like the press.

Regarding his long-promised quarterly press briefings, Dr Minnis told reporters he will host them "when the time is right".

On May 30, 2017, during his inaugural press briefing at the Office of the Prime Minister, Press Secretary Anthony Newbold said Dr Minnis will address the nation bi-annually and meet with the press on a quarterly basis.

This would have signalled a shift in the culture of press engagement with the nation's leader.

However, on May 29, - almost exactly a year later - Mr Newbold could not confirm if or when Dr Minnis will ever hold these quarterly press conferences.

At the time, Mr Newbold clarified that the idea was actually his; noting that the prime minister speaks to the press "all the time".

Mr Newbold added: "That does not mean he will never have a quarterly press briefing or a press conference. But the idea was to make sure he was accessible to all of you.

The prime minister was also asked if he was going to talk to the press or have a major press conference any time before then.

Dr Minnis said this would be conducted "once the need arise".

Following a presentation at Baha Mar's Convention Centre on Monday, the prime minister refused to answer questions from The Tribune and other media regarding the country's position on a two-year Federal Bureau of Investigation probe that uncovered alleged work permit bribery in The Bahamas as part of a larger US visa fraud scheme.

Reporters were told moments before by a handler that the prime minister would not take questions.

When reporters did ask questions, the handler, a police aid who was positioned to Dr Minnis' left and walking with his entourage, swatted the microphones of two reporters, saying: "Don't put the mic in my face."

Hubert Minnis is such a comedian. I can't help laughing at his jokes, "when the time right" indeed, hah, hah, hah.

The Dimwitted Minnis sorely lacks the mental ability necessary to take on questions from the media that require an immediate response....it's why he appointed the useless 'Ace' as his press secretary. Pindling, Christie and Ingraham needed no press secretary....these were men that could think quickly while standing on their own two feet. The Dimwitted Doc on the other hand is an awfully slow (yes, very slow) thinker. LMAO

Ma comrades, how many days did it take for prime minister Minnis to leaps ups from when he had uttered, “Better to lose an election than to lose a country" to "Politics for life.... a mere "153" days ducking the media when his bodyguard policeman's knocked down hand reporter.
{ You don't have make Trump-likes brungin' such governing shame upon nation's people up cause I me self counted the "153" days }.

I give Minnis a score of 0 out of 10. I cannot think of a single thing he has done right. I honestly am speechless about how bad Minnis is doing. He should step down or a vote of no confidence.

Minnis and them need to get real. People are paying rent at Lucaya out of their pockets in the hope something will happen. They need to hear facts not hopeful thinking....

It is said the best revenge is living well. Not so for the doc. he appears as if a pay loader and a Mack truck run all over him. he says they call him all kinds of things, have they called him bust up and beat up.

There is also the saying your ways just like you looks. not good not good at all.

"When the time is right" ...what a jack@&&...the right time for a quarterly meeting is every quarter...i.e....every three months genius. Where did we find this one?