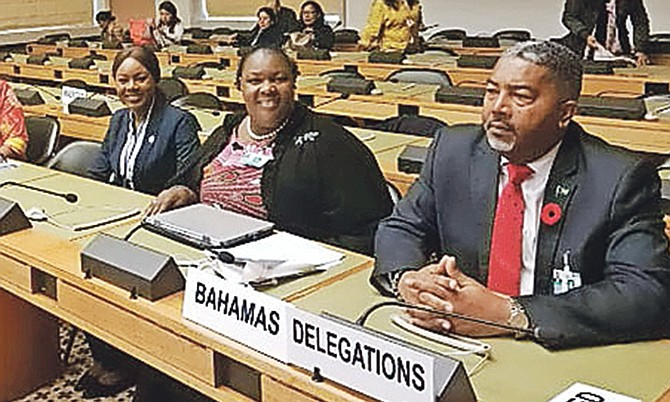 Some of the Bahamas delegation at CEDAW in Geneva.

DEEP rooted patriarchal attitudes and discriminatory stereotypes about the societal and familial roles of men and women were flagged as a major concern by the UN's expert committee on the Convention on the Elimination of All Forms of Discrimination Against Women (CEDAW).

The committee was tasked with reviewing the county's efforts to eliminate all forms of discrimination against women since its last assessment in 2012, which were included in its sixth periodic report and oral submissions before the body in Geneva last month.

In its concluding observations, the committee stated these attitudes were reflected in the insufficient public awareness and debate on women's issues; adding that the state had not taken sustained measures to modify or eliminate discriminatory stereotypes - which are a root cause of violence against women.

The committee underscored the "crucial role" of lawmakers in ensuring the convention was fully implemented, and urged the state to recognise women as a driving force of sustainable development, and to adopt relevant policies and strategies.

Its report called for increased capacity-building and the strengthening of existing institutions, but also clearly-defined strategy and policy across most public sectors in its report released yesterday.

Most notable were renewed concerns over sex-based discrimination against women and on nationality in the country's constitution, particularly the absence of an explicit definition of discrimination against women or provisions on gender equality. The committee also called for abortion to be decriminalised in all cases, and for the procedure to be legalised in cases of rape and incest, and severe foetal impairment.

The committee noted there were no effective mechanisms, and insufficient budgetary allocations, to implement and monitor the laws relating to gender equality; and highlighted the failure of the state to eliminate discrimination against vulnerable and intersecting groups, namely women of Haitian descent, migrant women, women with disabilities, lesbian, bisexual and transgender women and intersex persons, and women living in the Family Islands.

The UN committee called on the government to set a clear timeline for constitutional reform that would be supported by a comprehensive educational and sensitisation campaign and the inclusive participation of civil society.

On health, the committee hit out at the lack of age-appropriate and comprehensive education on sexual and reproductive health and rights, including responsible sexual behaviour for girls and boys; and the lack of family-planning services. It also expressed concerns about high maternal mortality rates and factors that exacerbate maternal mortality and morbidity, including the possible impact that early pregnancy and unsafe abortion may have on the rate of maternal mortality.

The committee called for the implementation of an integrated school curriculum; for girls aged 16 to have free and adequate access to contraceptives and sexual and reproductive health services; and to improve access to mental health services and special services on breast cancer.

The committee also expressed concerns about the Marriage Act, which states a minimum marriage age of 15 but allowed exceptions for unions of persons between the ages of 13 and 15. It was also noted there were no legal provisions governing de facto unions, which could deny women protection and redress in cases of separation.

It called on the state to enforce a minimum marriage age of 18 with no exceptions, and to accelerate the establishment of a unified court system.

Addressing access to justice, the committee underscored the limited capacity of both police and the courts to address complaints from women about gender-based violence in a sensitive manner. It was also noted that women from disadvantaged groups are unaware of their rights under CEDAW, and could not make claims due to lack of information.

It also expressed concerns that asylum seeking migrant women and women of Haitian descent, who do not have identity documents and passports, do not report abuse to authorities due to fear of deportation.

The committee recommended the state adopt legislation that incorporates gender in the refugee and asylum seeking processes; take measures to improve the social and economic situation of refugee, asylum seeking, migrant women and women of Haitian descent; and ensure that a gender-sensitive approach is applied to asylum claims by women and girls; and to provide refugee, asylum seeking and migrant women with free legal counselling on the procedures available for obtaining legal status in the state party and nationality documents.

However, the committee noted there was limited human resources and under-utilised financial resources at the Department of Gender and Family Affairs, along with a "weak institutional structure" which limited its autonomy and authority to effectively carry out its mandate.

The country's next periodic report is due November 2022; however, it is expected to provide a written report on steps taken to implement recommendations within two years.