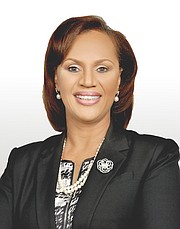 IN the wake of recent swine flu cases in the country, Ministry of Tourism Director General Joy Jibrilu on Friday told reporters that the ministry is “actively” monitoring such reports, as it does whenever there is an outbreak.

Ms Jibrilu added that the ministry continues to reiterate that the country is safe from a health perspective, noting there has been “no adverse publicity” thus far relating to the illness.

Ms Jibrilu made these remarks at a press conference discussing the “banner year for tourism” that the Bahamas has experienced. Tourism Minister Dionisio D’Aguilar was present.

On Thursday, Health Minister Dr Duane Sands confirmed there has been two cases of swine flu, also known as the H1N1 virus, documented in the country, resulting in one death.

Dr Sands implored residents to take advantage of the free flu shots that are available at public hospitals and clinics throughout the country.

“We actively monitor whenever there’s an outbreak,” Ms Jibrilu told reporters on Friday. “If you think about it, it was chikungunya, it was zika, it’s always something that you have to be on top of.

“And we have established a wonderful relationship with the Ministry of Health and all the necessary bodies, so information is fed. We monitor, not just daily, almost hourly, what is being written throughout the various social channels to see if there’s having an impact.

“But sending messages out - the country is safe, safe from a health perspective. If there’s a notice, whatever comes out from Ministry of Health we would share that, but it’s a constant monitoring and making sure that you are ahead of it, and then we responsive as soon as anything hits.

“But there’s been no adverse publicity at all,” Ms Jibrilu continued. “With the numbers that we have on the books for both Thanksgiving and for the Christmas season, it’s something that we have to be on top of.”

On Thursday, Dr Sands said while both cases of the illness were documented at Doctors Hospital, he said because of its cost, it is not common practise for public sector facilities to do viral testing, which is how the H1N1 virus is detected.

“The fact that we now know that we have had at least two H1N1 cases is because at Doctors Hospital they checked for it,” Dr Sands continued. “It doesn’t mean that we haven’t had H1N1 cases at Princess Margaret (Hospital) or at the Rand (Memorial Hospital).”

As receiving the shot is the only way to safeguard against contracting the swine flu, Dr Sands strongly urged people, especially those in the high-risk category to get the shot.

Those in this category are health care workers, day care providers and school teachers, children between six months and five years old, the elderly, persons with chronic, non-communicable diseases, women who will be pregnant during flu season and obese persons.

when the doctors or nurses strike, let the tourism folks fill in.

I didn't know we had free flu shots provided? Anyone gotten one before? Are they easy to obtain or is it one of those things where you've got to fill in a sheet with your mothers adress and maiden name just for some basic healthcare?

The vaccine comes to us compliments of Red China, as does the swine flu of course. LMAO