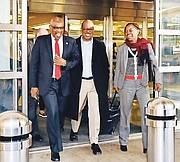 PRIME Minister Dr Hubert Minnis and a delegation arrived in Washington, DC yesterday to attend a climate change forum organised by the International Monetary Fund and the World Bank.

The High-Level Conference on Building Resilience to Disasters and Climate Change in the Caribbean brings together key stakeholders, including senior policymakers, public, private, and multilateral development partners, to explore incentives to shift the focus of policies towards building resilience and innovative disaster risk financing policies and instruments that would help in this regard.

Ahead of the conference, the IMF noted the importance of the event giving the region’s vulnerability to worsening climate change.

“The Caribbean region’s already high vulnerability to natural disasters is likely to be exacerbated as the frequency and severity of disasters increase from climate change effects,” the IMF noted.

“But for several reasons, countries in the region invest little in building resilience and rely heavily on ex-post external assistance to recover from such disasters.

Reducing the human and economic costs of natural disasters and climate risks requires a greater shift in policy focus towards ex-ante resilience building and a broad disaster risk management strategy.”

This meeting comes after a startling report released in October said harmful effects of climate change will be experienced at a lower temperature than previously anticipated, all while the world runs out of time to do something about it.

The United Nations Intergovernmental Panel on Climate Change released its landmark report on the impact of global warming at 1.5°C in early October, sending shock waves with its conclusion that an unprecedented human effort is required to keep temperature increases at a maximum of 1.5°C this century, beyond which countries like The Bahamas will face existential threats.

The report said the world has until 2030 to limit global warming to 1.5°C.

It raises the spectre that severe consequences of climate change will be felt in the lifetime of most living Bahamians.