Face To Face: How Can We Say We Live In A Fair And Equal World? 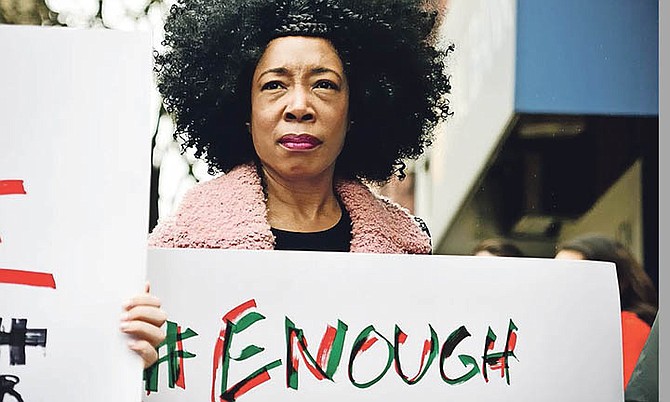 Violence against women and girls (VAWG) is one of the most widespread, persistent and devastating human rights violations in our world today and it remains largely unreported due to the impunity, silence, stigma and shame surrounding it, according to the United Nations.

On Sunday the UN marked the International Day for the Elimination of Violence against Women with this statement from UN Secretary-General António Guterres: “Not until half of our population represented by women and girls can live without fear, violence and everyday insecurity can we truly say we live in a fair and equal world”.

Here in the relatively small population of The Bahamas, incidents of violence against women are staggering. Take for example in the last few days a woman treated at the Princess Margaret Hospital, the victim of an acid attack by a man who allegedly used the chemical substance to burn and eat away at her face and other parts of her body.

This nation has been in shock many times – 38-year-old Shenique Hart, mother-of-three shot dead near her home in October 2017; the 9- year-old mother killed over a cellular phone in January of this year, a day after her birthday; the gruesome murder of Heart Foundation member Nellie Brown-Cox in 2011; the 2005 brutal murder of softball star Jackie “lil Stunt” Moxey; the murder of Tribune employee Ericka Fowler, mother-of-five, an incident which left the entire Tribune staff in shock as the life of the office was cut short; and the countless before and in between.

This week we celebrate National Women’s Week and note the achievements of many great Bahamian women, but that must be balanced with noting the fact that much needs to be done to empower disenfranchised women, protect women from abuse, and allow them proper recourse from the courts.

I mention the courts because both of my interviewees this weekend, educated women of affluence who suffered abuse – physical, emotional or mental from their partners - felt they did not get fair treatment from the courts. In the first case, a divorce which has been dragging on before the courts for years is still unresolved. The woman told me the court never ordered her husband to pay maintenance for the dependent child (one of three they have together), that her savings have been completely depleted, and she has yet to get recompense through the courts. Their youngest child, still in college, is facing the disappointment of not being able to continue college if the matter is not resolved soon.

This woman, after more than two decades of dedicated hard work as a wife, mother and equal partner in providing for the family, is running out of steam as her divorce battle has been dragging on for years. She was not able to reveal her name or the details of the case because she is desperately seeking closure from the courts. Her husband, meanwhile has moved on with his life and is having more children although the court has not granted them a decree absolute. She dealt with infidelity and lengthy emotional abuse, as well as threats of death that led her to call it quits.

During proceedings over the years, the remarks of certain judges led her to believe that court officials allow themselves to be “swayed by society’s perception of women than to simply try on the facts of the case”. One judge advised her to take what she said would have been pittance, and not enough to survive on, because her husband was not willing to offer her any more of the vast estate they amassed together. Another judge, she said, looked at her jewellery and appearance and remarked that she “didn’t look like a woman in need”.

She asked: “What does a woman in need look like? Do I need to be dragging slippers or appear in an untidy state for the courts to deem me worthy of what I have worked hard for and deserve? I was an equal partner in the marriage, and they expect me to walk away with nothing.”

One woman did just that – walked away with nothing. My second interviewee is in her 50s, living in her parents’ home and starting life over, having left everything she and her husband worked hard for “just for peace of mind”.

In her case, just like my first interviewee, her husband is well-known in the community and seems to have been able to sway attorneys and court officials in their perception. Both women say that when their partners told lies about them in court, it seemed to have been taken for the truth, and that their husbands’ societal status also made it harder for them to be properly heard or respected during proceedings.

The second interviewee, a woman with a master’s degree, said her sanity, her sense of respect and self-worth is all she is left with, as the courts allowed her ex-husband to have their house and all the assets they worked hard for together. The courts even allowed her husband to keep the children on the grounds that “she left the marital home”.

She felt she had to. The second time after what started as emotional and mental abuse turned physical, she decided to leave, not wanting the third time to be the last.

In the first incident, her husband pushed her out of the house and she received a gash. Her children helped her up and got her help, but her husband never apologised, which she took as a warning sign. After more than 20 years together, he began seeing someone else and what was a loving, open relationship turned into a cold, bitter routine of “just doing what needed to be done for the children”.

“Even though I knew he was cheating, I stayed,” she said.

“I focused on myself and the children, and thought that we were more important to him than anyone outside of our marriage. We never shouted at one another in our marriage. We talked about everything. We discussed any issues we had. It was a loving relationship and we loved our children.”

For this reason, she thought they could weather any storm. But a second occasion arose and this time she was on the phone when she was struck in the head. She didn’t know what he hit her with, but her head became very warm as she fell to the ground, and the words he uttered cut her deeper than a knife. She went to the hospital and after being seen, she never returned to the marital home to live.

“My sister and I would get the kids every Sunday, we would take them to church and they would spend the day with us. Sometimes they even came to stay by me at my parents’ house. We would all sleep on the floor, but we were together.”

She is finding it hard to secure employment as companies continue to tell her that she is over qualified, she said, and without a job, life is hard. Her children are grown now and she says she is financially embarrassed that she has nothing to call her own and that her children “are doing better financially” than she is, but her peace of mind is priceless.

“I didn’t hide anything from my children,” she said.

“I never said anything against their father. I told them my hurts and struggles, missing them on special occasions… but because I did everything I could for them whenever I could, they understood when I didn’t have to give them. I took out loans to pay their tuition. I bought my sons their first set of music instruments and went to their gigs when their father didn’t - which they appreciate. Now they have relationships of their own and I am so proud of them.”

What really touched her was when one of her sons said publicly: “I didn’t just grow up, my mother raised me! I can cook, clean, do laundry, fold clothes, hand stitch, hem pants and speak basics in four different languages before I was 16 because of her. Perhaps if we focused on raising more princes there would be more kings in the world for you queens… facts!”

The Ministry of Social Services and Community Development, in opening its Department of Gender and Family Affairs, called for more men to return to the homes and for men and women to become more respectful of each other, noting the importance of children seeing how partners should treat one another.

As we celebrate National Women’s Week, let’s take the time to honour women. The Declaration on the Elimination of Violence against Women, issued by the UN General Assembly in 1993, defines violence against women as “any act of gender-based violence that results in, or is likely to result in, physical, sexual or psychological harm or suffering to women, including threats of such acts, coercion or arbitrary deprivation of liberty, whether occurring in public or in private life.”

The UN states that violence against women continues to be an obstacle to achieving equality, development, peace as well as to the fulfilment of women and girls’ human rights. All in all, the promise of the Sustainable Development Goals (SDGs) - to leave no one behind - cannot be fulfilled without putting an end to violence against women and girls.

The world is neither fair or equal because self interest and social conformity through policy making will only continue to expose the inequities that exist in society. And they exist because of the selfishness in the hearts of men and women.