Culture Clash: March, Yes – But That Can Only Be A First Step 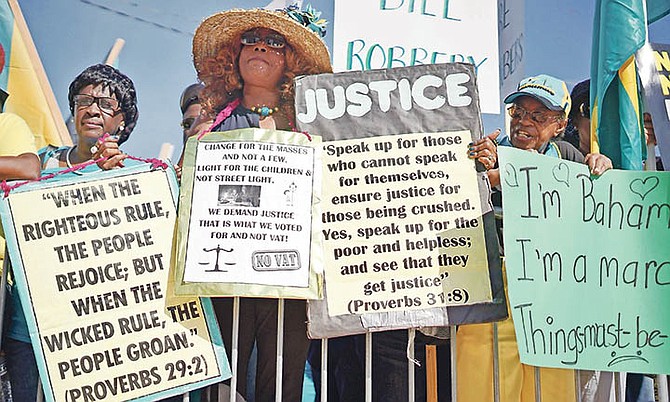 Protests are always political. They do not have to be partisan, but most of them end up being aligned with a political party, if only by perception.

The two-party system we have maintained created an environment in which the opposition positions itself as the friend of the people and capitalises on any disagreement between the people and the leading party. When the same party leads the government, sentiments change. We saw this with the FNM’s change in position on value added tax, from strongly opposing the introduction by the PLP to later increasing it by 60 percent. The FNM went from friend to foe in a matter of months and found itself on the wrong side of a protest last week.

No government likes protests, especially in response to their actions or inaction. They are a clear indication of public sentiment. Protests attracting thousands of people signal dissatisfaction with the administration and do not bode well for upcoming elections. Governments sometimes pretend to be unmoved by protests. They often convince themselves they are in control, at least for the rest of the term, and refuse to acknowledge the validity of the positions protesters take.

In the minds of leading parties, they are superior to the Bahamian people, in knowledge, position and power. They, much to their detriment, put ego above communication, leaving a wide gap where consultation and negotiation could have taken place. This creates the perfect opportunity for members of the opposition to look like heroes. This is not a secret, and we saw it happen only two years ago.

In 2016, Minnis encouraged Bahamians to participate in a protest, calling it “the people’s march.” It was stated that politicians were not welcome, but he went anyway. In fact, it was reported he was a part of the group that went to Rawson Square although the permit was for Pompey Square. He said: “What the people are showing and telling the government is they are tired of things being thrown down their throat.”

After the march, he said he was a changed leader. “I will listen to my employer and do what is right for the Bahamian people. This is the people’s time and I will listen to what they have to say,” he said.

The march held last week drew a different response from the FNM. The party chairman called it a PLP event and a failure. The FNM made a statement that drew ridiculous comparisons between the two marches. It focused on the number of participants, using it to measure the public’s satisfaction with the government. This is a clear indication the party does not understand protests — how they are organised, factors determining participation level, markers of success.

The recent march did not receive anywhere near the amount of promotion we saw for the 2016 march, it took place at a different political time (not approaching a general election, nor at the height of dissatisfaction), and was focused on specific issues. These do not amount to a comparatively large turnout. It is also unwise to interpret the participation of a few hundred people as Bahamians being “prepared to give the FNM time to do its job”. The number of protesters is more closely related to the factors mentioned as well as ability to get time off from work, backlash from participation in the last march, disillusionment with protests and recognising the probability of the protest, on its own, having an effect on a government led by someone who joined the protest last year and pretended to understand the cries of the Bahamian people.

The purpose of protests

It is clear the government does not understand protests, but it is quite likely that the general public does not understand them either. Protests are not the first or last step, and they are not productive in and of themselves. A protest is one in a series of tactics. You do not stand in Rawson Square with a sign for a few hours and get rewarded with an amendment to legislation. That is not how it works, nor is it the way these protests are generally designed.

Without a strategy for bringing change, protests are little more than theatre, drawing attention to an issue by putting them in the media for a day or two. If there is no occupation, work stoppage, traffic disruption, or other inconveniences, a protest has little chance of advancing conversations for change.

The Bahamas has a new fondness for protests, not because they have been effective, but because it generally feels good to be surrounded by hundreds or thousands of people with similar sentiments and energy, get attention and communicate a message to state actors. There is, of course, power in that solidarity and the sense of community it can build. Understanding we are not alone creates a shift from hopelessness to recognition of collective power.

The power of the protest - especially the kind we see in The Bahamas - is not in the names of the organisers, size of the crowds, number of politicians joining, or relevance and necessity of the demand being made. It is in the attention it draws and how that attention is used to action the rest of the plan. The reward of the moment is lost if no plan exists, and if participants are not able to speak to it.

The next step can be as simple as getting 5000 more signatures on a petition, but it is best when there is an escalation. This usually involves risk. The protesters showed up for a few hours, held signs, and participated in call-and-response, but what else are they prepared to do? More specifically, what are the willing to lose? Governments are less concerned about noise in Rawson Square than they are about thousands of people complaining about lack of access to services because people refuse to go to work.

There is a reason the threat of a strike restarts long-stalled negotiations. People are willing to take an action that will disadvantage people and have ripple effects, putting pressure on the body they need to act.

Before planning a protest, organisers need to have a clear understanding of the problem, a goal, knowledge about the people or the body with the power to act on it, and an understanding of the power protesters have and how to use it to motivate the target to act. It is not enough to translate dissatisfaction into catchy phrases on placards and stand in a space with a permit. Change requires more work, more planning, and more risk.

For governments and people in positions of power, it is not enough to acknowledge the people’s right to protest, and insulting organisers and participants is unacceptable. Reducing issues people face and their actions to change them to partisan politics is lazy and reductionist.

High utility bills and increased taxation know no party. Politicians can engage in their usual petty wars without discrediting or overshadowing the Bahamian people’s response to any administrations poor performance. It is dishonest to join protests for brownie points, and insulting to ignore protests or reduce them to partisan ploys. At 18 months in, the best course of action is to follow through on the commitments made in 2016. Be a different kind of leader. Listen, but do not stop there. Take action in the interest of the Bahamian people, and create systems that allow us to participate in decision-making processes. Hear our voices during the process. Protests should not be the only way we communicate.

What two party? It is the same set of corrupt individuals changing affiliation on the fly.