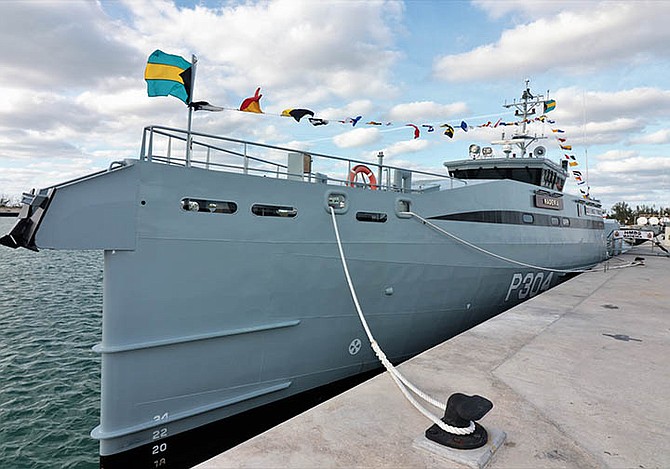 HMBS Madeira is the last of nine vessels that were procured through the government’s 2014 $230m Sandy Bottom Project. It is one of four 30-metre Damen 3007 Stan Patrol Craft, according to the RBDF.

Dr Minnis described the history of the RBDF in his speech and underscored the vast maritime territory it is responsible for protecting. “The security of our borders, including new threats posed by technological advances, requires a dynamic combination of air and marine assets, bases, as well as advanced detection and communication systems,” Dr Minnis said.

“The force recently completed the first phase of its decentralisation programme, with the acquisition of patrol craft under the government’s Sandy Bottom Project.

“The implementation of the second and third phases of the force’s decentralisation programme, which are currently underway, is designed to create a multi-layered security strategy.

“This includes the establishment of bases in the Northern Bahamas, and the acquisition of detection and tracking technologies,” he said.

And pray tell Mr. Minnis, how many of these 9 very costly vessels are seaworthy and at sea on any given day? LMAO

Why name a Bahamian navy vessel Maderia???.......There are many Bahamian heroes names to put on Bahamian vessels plying Bahamian waters...!!!!

Wonder how long before they wreck this one too or run out of fuel in the middle of the ocean?