'End Action Or No New Negotiation’ 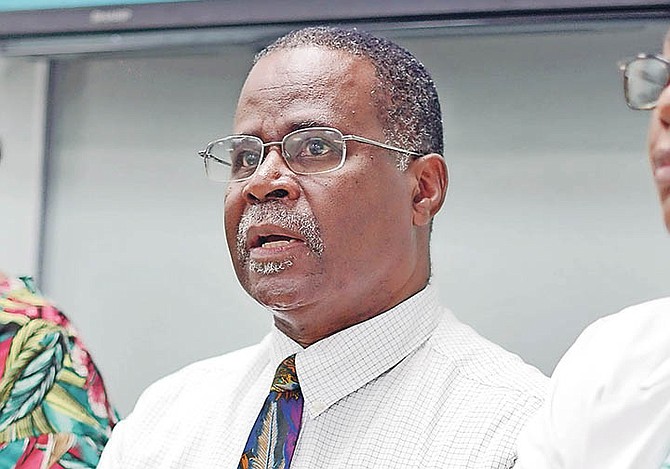 A MEETING between senior public doctors and Public Hospitals Authority officials fizzled yesterday after PHA officials refused to negotiate, declaring they won’t do so as long as doctors persist with their industrial action.

As the standoff continues, some doctors want to up the ante in their protest to the level of not performing any services at all.

Consultant Physicians Staff Association President Dr Locksley Munroe said the meeting was “horrible” and lasted only 15 minutes. Doctors came to the meeting prepared to soften their demands, but PHA Chairman Julian Rolle told them he won’t speak “under the conditions of industrial action,” Dr Munroe said.

In a statement, PHA said: “It is difficult to continue negotiations in good faith during the CPSA’s industrial action. Management urged the CPSA to reinstate services as the negotiations proceed. It is the PHA’s intention to maintain open lines of communication with the CPSA, and management hopes that discussions will continue in good faith as we seek to fulfil our mandate of delivering quality healthcare to the Bahamian people.”

Dr Munroe said some doctors want to increase their stoppage to three days after they began performing only emergency services. He said: “There are those saying we should up the level of service withdrawal. There are those of us who say we should remove services for everything. That’s a matter for discussion.”

People cannot be admitted or discharged from the hospital without a consultant’s consent; that’s one area affected by the industrial action. According to one junior doctor who spoke to The Tribune, there were numerous cancellations of operations for out-patients yesterday. However, Health Minister Dr Duane Sands has said the industrial action has not significantly hindered the PHA.

CPSA doctors have no industrial agreement and have not had a salary increase in ten years. They have agitated for a base salary increase from $48,000 to $75,000, for health insurance benefits and for a pension plan.

According to Dr Munroe, the PHA identified provisions for a $28,000 increase for doctors that officials wanted to divide between an increase in base salary and bulk payments. Before this week, the CPSA found the $28,000 inadequate and the two sides disagreed on how the money should be distributed. By yesterday, however, senior doctors had reluctantly agreed to the $28,000, saying they would accept a base salary increase of less than $75,000 along with health insurance benefits and a pension plan, according to Dr Munroe.

“We can instead distribute the $28,000 in a manner that is acceptable to everybody. In discussions within the group, we reached an acceptable point. It wasn’t what we wanted but we went to the meeting (yesterday) morning hoping and thinking that since they identified a certain amount of funds and we came up with an application formula for those funds and thought we could be finished with the meeting in a half-an-hour or 45 minutes, but they didn’t even see what was on the table because the man say he ain’ talking to us (sic).”

PHA’s refusal to negotiate yesterday was “presumptuous and arrogant,” Dr Munroe said. “It was pointed out to (Mr Rolle) that every citizen, every human, we have our human rights, our constitutional rights, so to say you aren’t talking to me because I’m exercising some of my rights, it was really, really upsetting.”

On Wednesday, Prime Minister Dr Hubert Minnis said he will meet with the CPSA to discuss their concerns. He previously met with the body but was unable to resolve their issues.

Dr Munroe said the prime minister “needs to come with something concrete, not empty words.”

“We’ve been listening to empty words for the last three years. We’d like a resolution,” Dr Munroe said.

I'm an absolute hater of unions, but these doctors need to be paid a decent salary and the PHA should negotiate better. To insist that the strike ends in order to negotiate is ridiculous - once the doctors are back to work then the PHA will drag negotiations on for months/years. How old is Julian Rolle - like 15? Immature!

doc has money for what he wants to have money for,. right out of the gate he wanted to increase his salary and the other house members for what? making Bahamians suffer.

doc pay the Doctors, The people voted for your Party, not the Doctors and it is your duty to be sure that the sick receive treatment.

To bad you can not blame the PLP.