Face To Face: A Voice Falls Silent, One Which Made Us All So Proud

It was difficult for me to accept I had to write this edition of Face to Face posthumously. I had every intention of interviewing Audrey Dean-Wright in person. I had already told her as much. I was excited and, when I started writing this column, I let her know that it would be my honour to tell her life story – one so fulfilled I hadn’t even figured out how I would compact it into a single page. But I knew it was necessary, because so many great Bahamians who have contributed so much don’t have their stories told… they are not celebrated enough.

When Audrey, a noted singer, choral director, pianist, adjudicator, composer and poet, passed away last week, I was in shock. I knew she was ill, but I thought she would bounce back, because that’s the kind of person she was. 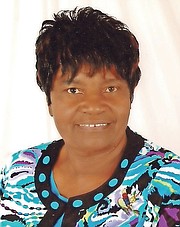 She was such a giant in personality, so strong and vibrant in spirit, it is hard to think she would have left us anytime soon. I was expecting that come Christmas time, Audrey would be calling upon me as she always had over the years, to do promotions for her beloved Rennaisance Singers and University of The Bahamas Choir. Her departure from this world leaves a void in our history and culture that will not easily be replaced.

She was a composer and pianist who has performed around the world and contributed to music in such a way that she is internationally recognised for her work.

To watch Audrey conduct a concert was a joy; she injected so much intensity into it that she created an electricity in the room. The singers, musicians and other performers seemed to be an extension of this spirit in such a way that in experiencing one of her concerts, the endless hours of preparation and devotion to the craft obviously rubbed off on all involved.

In the same way Audrey imbued a part of her spirit into her students and fellow performers, she also did so to every person she met. This is why, when she died last week, there was an outpouring of tributes on social media, in arts and educational circles and in homes and offices around The Bahamas, and her name could be heard and her laurels sung.

Born in 1949, Mrs Wright was heavily influenced by the music of her day. She grew up in Bain Town and as a child, she was influenced by choirs and groups that sang sol-fa, or solfeggio, a common practice in The Bahamas at that time. The result was the choirs were unusually proficient in sight reading.

Audrey sang in choirs from her earliest years and her first music lesson was at age ten with Muriel Mallory. By the time she was 12, she formed her own choir and directed the Transfiguration Baptist Church Children’s Choir.

The foundation of her music career was built on the mentorship of music educators Meta Davis-Cumberbatch and the late E Clement Bethel, two extraordinary nation builders.

Bethel and an “Aunt Hilda Barrett”, a choir director, provided encouragement as she continued her music studies, and in 2004, she presented “An Evening of Enchanting Music”, featuring a full concert of her original music at the College of The Bahamas in memory of her beloved mentor Bethel.

Audrey graduated from the Bahamas Academy of Seventh-day Adventists in Nassau in 1967. She studied at the Jamaica School of Music in Kingston in 1970-1971. After teaching for two years, she travelled to New York City where she attended the Manhattan School of Music as a scholarship student from 1973 to 1977, and obtained a bachelor’s degree in music.

During that time, she directed the Cherub Choir and Women’s Chorale at the Mount of Olives Seventh Day Adventist Church in Brooklyn, New York.

She continued her studies at the Jamaica School of Music and later at the Manhattan School of Music, New York, where she obtained her bachelor’s and master’s degrees.

Upon her return to The Bahamas in 1977, she began teaching music at the College of The Bahamas and taught there ever since, except for a study leave when she returned for graduate work at Manhattan School of Music in 1981, and other leaves later in that decade and the middle years of the next. She completed a master’s degree in music education in 1983, with an emphasis on choral conducting and a performance area of clarinet.

While studying for her master’s, she married Carlton Wright in 1982. He would become one of the country’s noted ambassadors. His calm and gentle yet decisive nature made him a well-loved diplomat. I even saw that play out in their home, where he was a diplomat as a husband as well. He provided every opportunity for Audrey to grow in her passion, and fuelled it rather than stifled it.

Audrey performing during a University of The Bahamas Choir Christmas concert.

He even sang in the Renaissance Choir and took direction from her, just as she did from him on a personal level. It was rare to see the kind of relationship they had; one so nurturing and one that seemed to have become even stronger with each passing year. He must have had every reason to commit to her causes, as she was so supportive as the wife of a diplomat.

Audrey had the opportunity to extend her music ministry throughout and beyond the boundaries of The Bahamas during her husband’s years of service. This happened when they lived in Miami from 1983-1985, following her graduation from MSM, and when they worked in the Bahamian Embassy in Haiti from 1985-1988. She also founded and directed the English Choir at the Institut Adventiste Franco Haitian, now the Universitè Adventise d’Haïti, and raised $3,000 to assist in the building of the college auditorium.

From 2005-2008, when The Bahamas was establishing an embassy in Cuba, she was listed as Education and Cultural Attaché and worked with her husband in the setting up of the ambassador’s office and residence.

While residing in Cuba, she read some of her poetry for leading Caribbean writer George Lamming at a festival in his honour in 2007, dedicating a poem “The Journey”, that she had written two years earlier to him. She also formed a choral group, Cantabile, to perform for diplomatic and church events.

I remember when Drexel Munroe flew a Cuban group in for a special performance at Audrey’s home. It was simply amazing to hear Bahamian folk songs played with a Cuban flair and at that moment I realised just how impactful her reach was.

She has over 250 original compositions, including favourites like: “Ode to Music” (for the late Kayla Lockhart Edwards); “Hallelujah” (for the late Winston Saunders); “Thou Wilt Keep Him in Perfect Peace” (for the late Pauline Glasby); “Bahamian Carol” and “If Jesus was Born in Nassau Town”. They encompass a broad spectrum of music, including Bahamian folk songs, spirituals, standard choral music, and works for piano and flute. Her music has been performed frequently in The Bahamas and in the United States, and her music and poetry have led to performances in Prague and London as well as in Poland, Ghana, Surinam, Haiti and Jamaica.

As co-founder and co-director of and pianist for the Bahamas National Children’s Choir, Audrey has taken Bahamian children around the world, performing in eight countries.

In 2004, the choir returned to Russia to participate in the eighth annual Children and Youth International Choir Festival, where it placed second out of 65 choirs. In 2012, they were bronze medal winners in the 11th China International Chorus Festival and International Federation for Choral Music.

Her sister, the late Patricia Bazard, laboured with her for many, many years for the children’s choir, which was her love. Patricia was also the comedienne every year when the Renaissance singers performed for Christmas concerts. Patricia died less than a year ago, and it is hard not to think that the two sisters are singing their heavenly tunes together in a higher realm.

Audrey was chosen as Woman of the Year by the American Biographical Institute in 2006, and she has also been listed twice in the International Who’s Who of Professional and Business Women. In 2008, she was chosen as one of the 25 Most Outstanding Women in The Bahamas in recognition of her contributions to the arts in that country and was also given a “Living Legend Award” that same year. She was the first non-American to be a featured composer with the Southeast African American Collegiate Music Festival, which gave her a Lifetime Achievement Award. In 2015, she was awarded Woman of Distinction by the Celebrating Women International Organisation.

As I wrote this week’s column, tears fell from my eyes as I thought of the fact that she is actually gone. I can still hear her voice; when she spoke it even sounded like a song.

I can still see her smile, so graceful and shining so bright from within. I can still taste her beautiful Bahamian food. Dinners at her home in Skyline Lakes would include all the native dishes you could think of, topped off with drinks like guava juice, coconut water and an array of Bahamian bush teas.

She always raved about her four biological children but somehow, she made all of the children she taught and everyone who came under her mentorship feel as if she was a mother to them too.

Christmas won’t be the same for me without Mrs Wright. If it weren’t for her, I may have not attended a Christmas cantata, I may not have spent such a significant amount of time at Government House and I may not have appreciated that, right here in The Bahamas, exists people with the ability to not just follow a tune, not just ride a beat, but create music from scratch – beautiful music that is so touching that people all over the world stopped, listened, and honoured as touching to the soul and timeless.

Saddened by loss of another tru tru Bahamian gem. RIP.