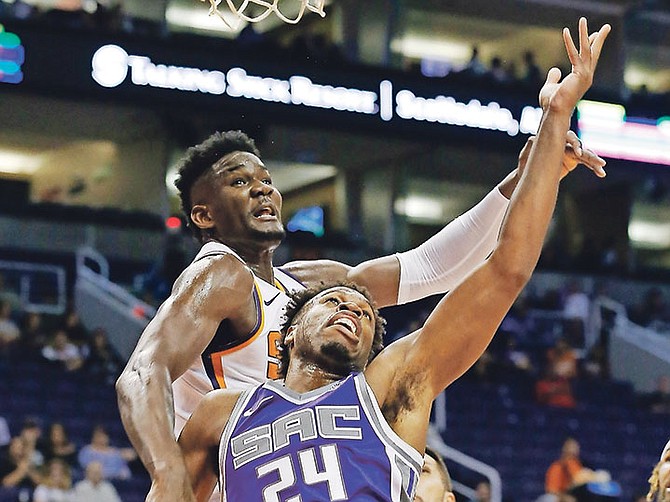 In the first of several matchups this season between the country’s premier basketball talents, Deandre Ayton had the better individual performance in his debut for the Phoenix Suns but Buddy Hield and the Sacramento Kings came away with the win.

Both teams tipped off their NBA preseason slate Monday night and the Kings claimed the 106-102 victory at the Talking Stick Resort Arena in Phoenix, Arizona.

Hield finished with six points, four rebounds and three assists but Ayton emerged as the main storyline with 24 points, nine rebounds and three blocked shots. The two players met head-to-head when Ayton rejected Hield at the rim and forced a turnover midway through the second quarter.

“Obviously coach didn’t want to overwork us, he really wanted us to just get a feel of the game so I just took advantage of the minutes I had to work with and I had a lot of fun. You work so hard in the offseason to get yourself in NBA-ready shape, you can have a lot of fun when you’re not fatigued.”

“That man is big on his bigs rolling to the basket. As soon as I screen, the ball is in the air and I just got to go get it. That’s just Josh, he will find you everytime,” Ayton said. “All you have to do is listen to the guys that’s been here before you and you will succeed.”

Jackson finished with a team high six assists. “I’ve known him [Ayton] since I was like a freshman in high school,” Jackson said. “He’s a competitor and when I’m coming down the lane and I know he’s on the side rolling to the basket, it’s a pretty easy decision for me.”

The rookie center was most encouraged by his three blocked shots and effort on the defensive end.

“On defense I talked a lot when I was out there. I think I held my guards on communication, with pick and rolls, down screens, telling them when to go under the screens, off ball screens as well for the flares and just being in their ear to help my teammates know where they are, if they’re by themselves on an island or just being their backup and if their man breaks the paint I’m always there to try to protect the basket and i think i did a great job on my verticality, I’ve just got to get better.”

Head Coach Igor Kokoškov also noted Ayton’s effort on defense and testing his young players on their ability to closeout games. Ayton missed his final four shots, his only missed free throws and picked up an offensive foul in the final minute.

“I think he was engaged. He’s a playmaker defensively, too, so that’s something that he can command. We have three young guys and the benefit of (preseason games) is having young guys on the court to see how they perform and learn from their mistakes,” Kokoškov said. “We purposely left those three guys on the court to see if we can close with them.”

Hield shot just 3-10 from the field, including 0-2 from three point range.

The Suns will play a five-game preseason schedule which tips off with three home games and concludes with two road contests.

The Suns will face the New Zealand Breakers of Australasia’s National Basketball League on tonight and the Portland Trail Blazers on Friday, October 5. The road slate is highlighted by a matchup against the defending NBA Champion Golden State Warriors on Monday, October 8.

Ayton and Hield will face each other four times over the course of the regular season as Pacific Division rivals in the Western Conference.

The Suns will host the first of the four meetings, December 4 at Talking Stick Resort Arena. The Suns will also host game two, January 8. The venue shifts for game three when Hield and the Kings host the Suns February 10 at Golden 1 Center. The final regular-season meeting between the teams takes place March 23 in Sacramento.