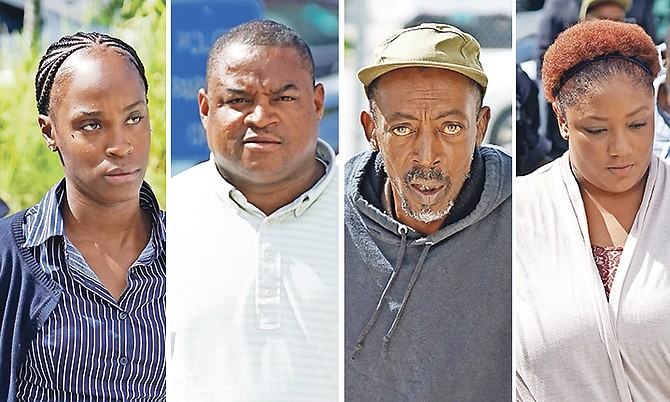 A female Royal Bahamas Defence Force marine must spend a week in custody before she is sentenced for hitting and killing two pedestrians with her uninsured car in the Marathon area last month, a magistrate ordered yesterday.

She was one of five people charged with vehicular offences yesterday, including hit and run incidents and killing in the course of dangerous driving. Three of the accused were given fines of about $10,000 for the vehicle-related killings.

Prior to the order, Reckley, the RBDF’s top female recruit in 2018, pleaded guilty to one count each of killing in the course of dangerous driving and driving while not covered against third party risk insurance.

According to police, Reckley, who was off-duty at the time, was heading north on Marathon Road in the area of Samana Drive shortly before 1am when she lost control of her car and struck the pair.

Both Augustin and Devallon died on the scene, despite the efforts of emergency medical personnel. An autopsy report determined their deaths were the result of blunt force trauma caused by injuries to their necks, head and torsos.

Their deaths last month marked the 54th and 55th traffic related deaths of the year.

Meanwhile, Kareem Bowe, a facility manager at the Ministry of Works, was yesterday remanded into custody until he pays a $10,100 fine for hitting and killing a man with a car not registered in his name while in the Boyd Road area earlier this year.

Prior to receiving his sentence, the 37-year-old pleaded guilty to one count each of killing in the course of dangerous driving and driving a vehicle while not covered against third party insurance concerning the June 23 accident.

According to Chief Superintendent Craig Stubbs, officer-in-charge of the Traffic Division, the deceased, Jean Lubin, was walking northbound on Foster Street when a red car, which was traveling south, veered off the eastern side of the road and hit him.

The pedestrian was taken to hospital but died a few minutes later. An autopsy report determined the cause of death was the result of multiple injuries and blunt force trauma to the head and torso.

According to the facts, the car in question was a red, 2008 Honda Accord registered to Renaldo Russell, but driven by Bowe.

Additionally, 57-year-old Floyd Weech pleaded guilty to hitting and killing Andre Otto Sands with his truck as he attempted to cross Robinson Road earlier this year, then fleeing the scene in an incident that was caught on camera.

According to police reports, Sands was attempting to cross Robinson Road near Washington Street shortly after 10pm on July 23, when he was hit by a red truck that continued driving in an easterly direction.

Sands was taken to hospital by paramedics and pronounced dead a short time later. An autopsy report determined the cause of death was blunt force trauma to the head.

The accident was caught on nearby CCTV and posted to social media over the following weekend. The footage showed the man carefully watching the road as a number of vehicles drove by. He began crossing the road and then looked to his left for oncoming traffic.

Halfway across, he suddenly became aware of the truck speeding towards him to his right and before he could jump out of the way, the vehicle slammed into him.

According to the prosecution, the Ford F150 truck was registered in Weech’s name. Additionally, Weech admitted he was the driver, and that he didn’t stop because of the crowd in the area.

Magistrate Vogt-Evans accepted Weech’s guilty pleas, but like Reckley, ordered him into custody to await his sentencing on October 15.

Meanwhile, a woman was ordered by another magistrate to pay $10,500 dollars for hitting and killing a 39-year-old man as he attempted to cross the Tonique Williams-Darling Highway last month, then fleeing the scene.

Magistrate Kara Turnquest-Deveaux ordered Taylor Pratt to pay $10,000 for killing Marvin Pinder in the course of dangerous driving, or face two years in prison. She was also ordered to pay $500 or face six months in prison for failing to remain at the scene.

Pratt’s attorney Christina Galanos informed the court that Pratt paid $7,500 of that total yesterday, and now has until November 12 to pay the balance.

According to reports at the time, Pratt, struck Pinder as he attempted to cross the highway near a business establishment shortly after 11pm on September 21.

Pratt, however did not remain at the scene.

Paramedics attempted to revive Pinder but were unsuccessful, and he was pronounced dead at the scene.

Additionally, Edy Paul, of Antigua Street, was fined $3,000 for giving a false written statement concerning Pinder’s death to the authorities. Failure to pay the fine will result in two years imprisonment.

Another man, Terrance Ferguson, of Mermaid Boulevard, denied hitting and killing Kendino Rudon with a car he was driving on August 7 in the Yellow Elder community, then fleeing the scene.

That matter was adjourned to November 12 for trial. He was granted bail in the amount of $8,000.