Taranique - Victim Of Outdated Laws: Us Congresswoman Calls On Bahamas And Caricom To Modernise 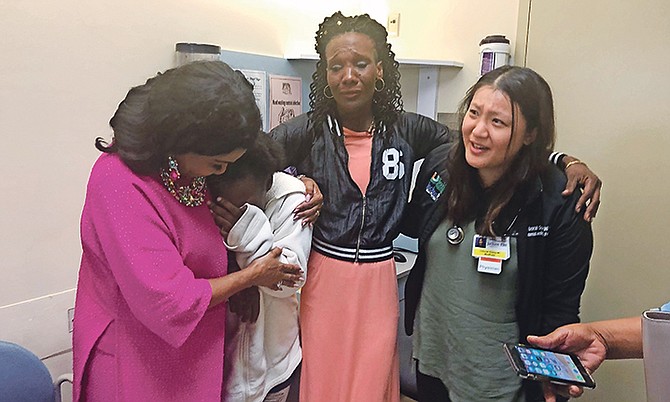 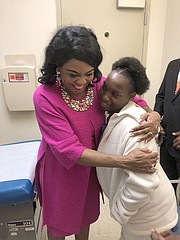 The consultation comes more than a year after the 16-year-old first started experiencing blinding headaches that at times rendered her unable to see clearly or walk unsupported.

Taranique does not have a passport, and her journey to gain entry to the United States on an emergency medical visa has renewed concerns over the unregularised status of Bahamas-born children of second generation foreigners, mainly those of Haitian descent, who were also born in the country.

“These antiquated laws have not kept up with today’s society,” Mrs Wilson said.

“CARICOM needs to place this issue of immigration at the top of its agenda, and tackle it as a problem.”

She continued: “Because what’s going to happen is we’re going to find ourselves more and more stateless people, which is unfair to the next generation that we’re trying to raise and unfair to the people who just want to make a living and take care of their families. So we have to look at those antiquated laws and adjust them to today’s population and how we live across the world.”

The Bahamas government has insisted descendants of Haitian migrants born in the country are legally entitled to Haitian citizenship, and as a result, have no claim to statelessness. People born in the Bahamas to non-nationals are entitled to apply for citizenship at the age of 18, and the government’s policy mandates children seek out the nationality of their parents in the interim period to satisfy requirements for all residents to be documented.

However, Taranique’s mother Ginette Caty claims her repeated attempts to regularise her daughter were unsuccessful. Ms Caty was reportedly born in the Bahamas to a Mexican mother and a Haitian father, and was naturalised in 2013. Taranique’s father, who is not married to her mother, is also a Bahamian. Under Bahamian law, if the two were married at the time of Taranique’s birth, the child would have been considered a Bahamian.

“I had days I couldn’t sleep, I couldn’t eat,” Ms Caty said. “My daughter kept saying ‘so what they’re going to leave me here to die?’ I had some money saved up to get my home, I’m a single mother. I took that money and took her to Doctors Hospital, and that’s where we got the diagnosis and referral to Jackson Memorial - that was April of this year.”

“We’re here,” she continued. “We’re happy to be here. The most important part is we just want to get it over with and behind us.”

Taranique is slated to receive an MRI scan today and told The Tribune she was scared but happy to be finally making progress on her medical journey. The past few months have been emotionally taxing on the teen, who was said to have experienced intense social media backlash since her mother began publicly appealing for government intervention in her case, and medical assistance.

She was reportedly found in her bedroom with a knife by an aunt earlier this year, according to her mother, who said attempts to shelter her daughter from vitriol due to her ethnic background both online and in her community has proven difficult.

Yesterday, Mrs Wilson described the Bahamian government’s response on the matter as slow and uncooperative.

“It took a lot of communicating with the State Department, and with the Bahamian government who was unable to understand the urgency and they were unwilling to work with us,” she said.

Taranique was issued a certificate of identity in August, and it lists her as a Haitian national.

Mrs Wilson drew parallels between the Bahamas’ immigration policy and that of the Dominican Republic, which began to retroactively strip people of Haitian descent born in the country of their prior entitlement to citizenship and deport them following a 2013 court ruling. The Dominican government has denied claims that thousands of people were made stateless by its regularisation plan.

“There are a lot of similarities,” Ms Wilson said. “They (the Bahamas government) need to figure out a way that they can to make this amenable to the people that they have. See that might have been ok 50 years ago, when we didn’t have all of these open borders and immigration going on and parents inter-marrying with people from different parts of the Caribbean.

Mrs Wilson, who noted her familial ties to former Sports Minister Dr Danny Johnson, said: “Same bloodline, it’s nuts, same island, same neighbours, it’s crazy. It doesn’t make any sense at all so CARICOM really needs to put some thought into how they can solve this.”

CARICOM member states took historic steps to review and accelerate full implementation of the Single Market and Economy at its summit in July.

However, Prime Minister Dr Hubert Minnis told media upon his return the country has no intention to become a signatory. Among its tenets

is the Protocol on Contingent Rights - a framework for the free movement of skilled labourers and their families between member states.

Immigration is a key element of the US Democratic campaign, according to Mrs Wilson, who said her party hoped to regain control of both the House and Senate in upcoming elections. She pointed to last week’s federal court ruling halting the Trump administration’s decision to bring an end to temporary protected status for refugees from El Salvador, Haiti, Nicaragua, and Sudan.

"...more stateless people, which is unfair to the next generation that we’re trying to raise..."

I agree that this immigration problem needs to fixing. All self proclaimed stateless people need to move to the country where they know they can get a passport. We don't need to accommodate people who come into our country and make babies without being married. The parents need to do the right thing and get their children documented in the country where they are entitled to it.

Sickened, you are sickening. You do not own any country. We will all have a destiny in that country 6 feet below the earth. Humble yourself.

It was sooo nice of Congresswoman Wilson to allow the family to stay in Florida as long as they want and for her to help them get Green Cards. For all you self proclaimed stateless people, now you know how to get to the U.S..

I take issue with the headline: Taranique - Victim Of Outdated Laws: Us Congresswoman Calls On Bahamas And Caricom To Modernise.

NO, NO, NO, Taranque is a victim of irresponsible parenting and illegal immigration! While, I sympathize with this young lady's situation, her parents and grandparents are at fault. Her grandparents for entering this sovereign nation illegally and having her mother; and her mother, knowing her situation and statelessness, having her. They placed themselves in this situation.

I take issue with this Congresswoman! Please do not tell us what we should do. We are a sovereign nation! You are only looking to appease Taranique's US family who I am sure are your constituents, otherwise you would have never gotten involved!

The US and Canada are among the last in the world to confer automatic citizenship on people born in those countries to non citizens. The rest of the world, especially Europe has smartened up because they are practically being overran by illegal migrants who are spitting out children faster than they can count.

The Bahamas is a small nation, if we were to allow every Tom, Dick and Harry to enter our country and automatically confer citizenship on them, we would no longer be able to manage ourselves.

I just can't understand how it is that whenever illegal immigrants have an issue it becomes the Bahamas government's problem? Why aren't these persons made to suffer the consequences for the problems they make for themselves? The Haitian government don't even seem to check!

Tell this old cowgirl goon that there are NO stateless people in The Bahamas ....... We have Haitians living here who do not want to be Haitians .......... that's their problem.

So all these commenters believe wholeheartedly that a child should pay for the parents mistakes? Sounds more Muslim than Christian to me. I'm not a bible thumper but I think I have more compassion than many who do thump

I hope you noticed that no matter how much yinna talked about the girl is sick. . .them Americans did not budge one inch about their law about getting a visa!! Yinna stay right there about stateless persons. . .nobody on yall run!! Wilson mother is Bahamian who married a an American (Smith). . .not allowing she and her 3 children to claim Bahamian citizenship!!

No a child shouldn't pay but how much more can we take if the people are coming here illegally and then breeding like rabbits? The monster is of their own making. Our laws are in place but the problem clearly starts with the disrespect and the blatant breaking of them.

I suppose if you can not run your own Country, The next best thing is to run others. No doubt this photo came from the DRAMA KING&lt;

I simply cannot believe that any Bahamian can be so heartless and mean-spirited as many of the comments here seem to suggest. What seems to b lost in the rants and tirade here is that the girl's father is a Bahamian. She was not born to Haitian parents, but a Haitian mother and a Bahamian father. That is the point of the argument! Why can I not, as a Bahamian male, pass along automatic citizenship to my Bahamian daughter, whose mother happens to be non-Bahamian? All of the other ignorant rants simply serve to show the speed at which our beloved country is regressing into the past. Come on Bahamas, we are better than that&gt;

Because they say Bahamian seed must only meet Bahamian wombs. Any other scenario is a dubious plot to get Bahamian citizenship to the third and fourth generation. At least that's what they say.

Well Cat... duh... I do believe we tried to amend the law but that was rejected which makes her the nationality of her unwed mother, who was a Haitian when she had her.

Please it's not Caricoms problem. The Bahamas is the only first world country in CARICOM. Who are we to suggest anything? A strange place indeed.

CatIslandBoy, as soon as you deposit 2 billion dollars into the Central Bank in Nassau, we can let all the Haitians in and outlaw condoms.

That this country has some really stupid laws is beyond argument.

But what is also beyond argument is that 400,000 people cannot allow the unfettered illegal migration of potentially millions of Haitians (or others), which would swamp the country completely.

The only practical solution is to pick a date out of thin air (say 1st Jan 2018?), regularize everyone who was here then, grant them citizenship and then actually ENFORCE IMMIGRATION LAWS and allow no more illegal immigration.

But to do that, you would have to have a functioning Immigration Department, Police Force, RBDF and government bureaucracy in general. Which we will never have. Maybe we should import 1,000 Swiss citizens and let them do the job, because Bahamians....no chance.

How about Independence Day as everyone seems to be very fond of that date, and it is a bit further back! As for the efficient Swiss, as long as they bring some of their lovely chocolate.....

Jamaicanproud when will you be going back to Jamaica and the Bahamas does belong to Bahamians god sapareted people countries so stay out; of Bahamians affairs

Islanboy you are entirely idiotic. I don't live in that useless place. I just observe Caribbean runnings.