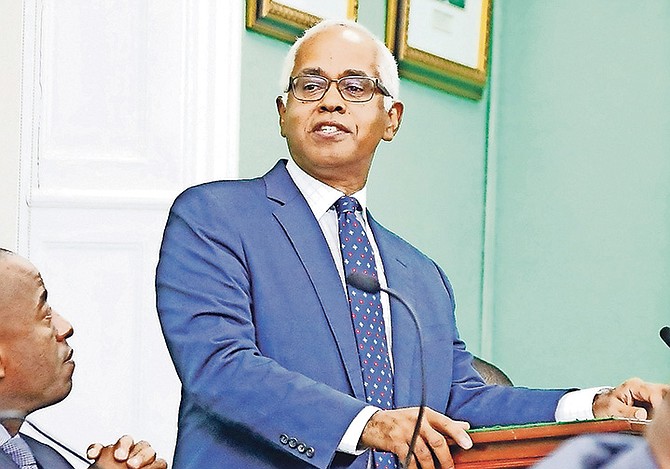 Business confidence is growing because the Free National Movement (FNM) is viewed as "better managers of the economy and the Government's finances", a Cabinet minister said yesterday.

He added that large Bahamian companies had told him "business is good", and there was an increasing willingness to invest in the Bahamian economy due to the Government's efforts to tackle the fiscal crisis and rein in public spending.

In remarks that are sure to infuriate the Progressive Liberal Party (PLP), Mr D'Aguilar said: "I think the perception is that the FNM are better managers of the economy.

"Every government upsets everybody about something, but when you step back and assess the management of the economy we're the ones talking about Fiscal Responsibility legislation," the Minister continued.

"At least it gives you confidence that we are not going back to where we were prior to the general election, when people were feeling there was so much irresponsible spending going on that they were afraid the economy was going into a tailspin and the possibility of suffering a devaluation was getting higher."

Mr D'Aguilar's comments are likely to reignite the "war of words" between the two major political parties over who has been the better steward of the Bahamian economy and government finances, with both sides able to seize on the other's failures.

The Christie administration added $2.2bn to the national debt despite enjoying the benefit of more than $1bn in new VAT revenues during its final two-and-a-half years in office, following the $1.5bn created by the last Ingraham administration.

While the Minnis administration has focused on improving government accountability and transparency, and eliminating the Government's $300m-plus annual deficits with a combination of tax increases and legislative measures, critics can also point to mishaps such as the $5.5bn Oban Energies Heads of Agreement "signing".

Mr D'Aguilar, though, pointed to the Fiscal Responsibility Bill recently passed by the House of Assembly as evidence of the Government's commitment to place the public finances on a more sustainable path - a move that will foster private sector confidence and room for its future growth.

"With the introduction of Fiscal Responsibility legislation, the real focus on controlling spending, people feel the public finances are being better managed, and we are in a better place than we were," the Minister told Tribune Business.

"Confidence is growing steadily in the economy, and where Bahamian purses were shut and they were not interested in investing in the domestic economy, people are feeling a bit more confident that the country is in a better place financially. They are more minded to invest in the economy."

Mr D'Aguilar said this was helping to counter the negative fall-out from the Budget's VAT rate increase to 12 percent, and the subsequent impact on disposable income and consumer spending.

"The increase in VAT is probably having some drag, but it's being overcome by the US economy and confidence of Bahamians in their own economy," he told Tribune Business.

"In my unscientific poll of bigger businesses, they are saying, yes, business is good. The confidence level is growing. That's the main thing. A lot of what is driving the economy is confidence.

"The confidence among local business people is we're in a better place, feel more confident investing in my economy, and do not have to worry about the Government continuing on this path of irresponsible spending."

Business executives on Tuesday said they were "pleasantly surprised" that the IMF did not cut its 2018 and 2019 growth forecasts for The Bahamas by more, given the VAT rate increase and impact of global economic developments such as the US-China trade war.

The Fund cut its economic expansion prediction for this year from 2.5 percent to 2.3 percent, while reducing its 2019 estimate by just 0.1 percent - from 2.2 percent to a revised 2.1 percent.

Mr D'Aguilar said the IMF and credit rating agencies had seen the Government was "now making good faith efforts to balance the books and get the Government finances under control".

He conceded, though, that the Government still had to address structural obstacles and bottlenecks that were "a major drag on the economy", such as the persistently high level of non-performing loans in the Bahamian commercial banking system.

"We're by no means out of the woods, but at least we're heading in the right direction," Mr D'Aguilar told Tribune Business. He added that The Bahamas' economy was demonstrating "a certain amount of resilience, a certain amount of strength" because it was feeding of US growth and low unemployment.

It is my hope that these Masterful LIARS did not cook the books. Thus the IMF report. I agree with Mr: Lowe the report does not reflect the reality on the ground.

They may be sure that sooner or later the truth will prevail..

Umm when you are starting from the bottom its not harder to be better. Though i am not sure FNM is better and FNM is definitely not good at running the economy. If we had anyone semi good for the last 20 years we would be in a much better position.

The FNM sucks. The economy is terrible ever since 12% VAT!

Mr D’Aguilar should be specific as to which businesses are reporting that business is good. Most businesses, including food stores, are reporting that sales are down 20. - 30 percent since the VAT and smaller businesses are suffering even more. Yes the FNM are managing the economy better and have managed to put the brakes on a lot of the corruption that was going on and the carting away of millions in government funds, but the biggest problem D’Aguilar’s FNM government has is the perception that they are only for some of the people and not all Bahamians especially the working class and small and medium businesses. Some view this government as a hen sitting on her eggs and only allowing the chosen few to reach in and bet one. Despite Bah Mar opening, unemployment is still a major concern especially among the young and more specifically among young males. And the cost of living is also a major concern, especially with the recent doubling of electricity bills. And this will certainly increase the number of customers having their power supply disconnected.

So much early promise that even I held out high exceptions Comrade Wash em, Dry em, Press em Dionisio James... but fell same knock the former governing PLP politicians as Minnis, KP and Carl Wilshire..... Mouth full big hollow words not supported with actions...... The man's talks the talk, but it's all no damn good talk - full no results... and for man - more UBP white, than PLP black.

Some of the world stock markets, including China and the US, had some of their worse performances in 10 years. While President Donald Try is blaming this on the Federal Reserve , who he claims is raisin interest rates too fast in an effort to starve off inflation,this can be the beginning of a new recession. Especially since it is the technology stock that are taking the most beating.And hopefully the FNM has a plan in placei in case the world does slip into a recession,especially since the Bahamas went thro at least two economic cycles withoutano significant recovery. Can you imagine what can hayto the National Debt with another five years of recession?

John, You seem to be one of the few paying attention. The big guys are doing OK, as they always seem to do. The rest of us will be left behind, as usual. But hey, the bigger businesses are doing just fine. Yes, the ones with political clout.

@Porcupine: I guess you mean the bigger businesses that are getting government contracts and exemptions on washing machines and plane and helicopter parts ay? And clothing and shoes and fabrics. Lots of those stores are still on the verge of closing down because there is no real growth in the economy and government has sucked out an additional 4.5% in vat, not to mention other increases, police records, Birth certificates. Even the director of the Arawak Port is reporting that volumes are down significantly The cost of doing business for the small man has gotten too high. You would think D’Aguilar would be busy with the various hotels doing advertising and promotions to keep every hotel room occupied this winter season. That’s how new money will get into the economy.

If it was up to this man. BAH MAR would still be in the courts. Yet that is all they have. He also opposed VAT. but the first chance they got it was increased,

VAT hurts poor people. The oppressed and depressed of the Bahamas.

Re Birdie it hurts everyone. Don't even think about going out to dinner at a fine restaurant. I spent over $20 at a mom and pops shop yesterday for pea soup and guava duff. The rate for large sheep toungue souse is now over $16.

Don't even try to buy boil or stew fish.

What a stupid statement. Come to Freeport. Come see the results of your management....

Dumbest, most useless FNM administration yet...

" from French: laissez faire, lit. 'let do') is an economic system in which transactions between private parties are free from government intervention such as regulation, privileges, tariffs and subsidies. The phrase laissez-faire is part of a larger French phrase and basically translates to "let (it/them) do", but in this context usually means to "let go".[1]

This is what is lacking in the country. And one must really question who is advising this government. Banks are still questioning the source of funds for business clients who have been customers of the bank for decades. And Banks are charging a 1% processing fee to take cash deposits over $10,000.00 even though they pay no interest on these account balances. So where is the confidence in the economy coming from.