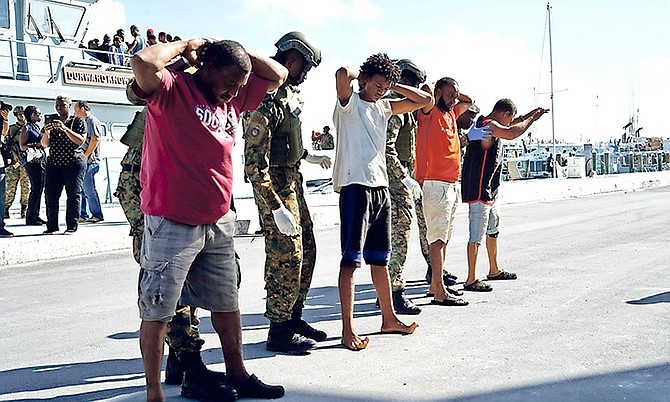 Dominicans detained by the RBDF.

MARINE Resources Minister Michael Pintard yesterday promised stiffer penalties for poachers caught in Bahamian waters as he described as “tragic” the quantity of undersized lobsters caught by the 124 Dominican poachers who were arrested over the weekend.

Mr Pintard said Cabinet is set to review tougher amendments to the Fisheries Act, promising the government will continue to be aggressive against poachers.

The poachers, who engaged in a shootout on Saturday with Royal Bahamas Defence Force on the high seas before they were arrested, were brought to the capital yesterday morning and remanded to the Carmichael Road Detention Centre.

Mr Pintard could not confirm at the time whether the poachers will be charged with attempted murder, adding the investigation is continuing. However, he predicted the $3m fine levied against 46 Dominican poachers in August will “pale in comparison to what will come in the future, as well as the time spent incarcerated.”

RBDF Commodore Tellis Bethel added that this was the largest arrest that has taken place in the last year. After the three steel-hulled Dominican vessels were docked at the RBDF Coral Harbour Base, Mr Pintard, law enforcement officers, and members of the press were allowed to tour the severely rusted boats and see the torrid living conditions on the vessels.

Speaking to reporters on the docks, Mr Pintard expressed concern about the impact poaching has on the sustainability of the country’s marine life.

“When you go on these vessels, you (can) clearly see that the poachers who are coming in our waters have no concern about future generations, whether they are Bahamians or others, who we feed by virtue of the fact that the Bahamas is a breeding ground for a number of marine species,” Mr Pintard said.

“It is tragic when you go into the hold and you see the amount of catch, the fact that so many of the lobsters that have been caught and fished are undersized.”

Mr Pintard added it is “too early to tell” the estimated dollar value of the haul, noting this will be reported after fisheries officers and the Ministry of Finance have done their inspections.

“In November, the Fisheries Act which will be amended, will go to the Cabinet of the Bahamas, which calls for far stiffer penalties for those persons who are captaining these vessels as well as those persons who are working on these vessels in tremendously bad conditions,” Mr Pintard continued. “So you can expect that we’re going to continue to be aggressive and we’re going to continue to produce results.”

On July 8, RBPF vessel HMBS Madeira arrested 46 Dominicans aboard their vessel “Ronnye” approximately 20 nautical miles south east of Cay Lobos. HMBS Madeira was under the command of Senior Lieutenant William Sturrup. Approximately 33,000 pounds of fishery products were confiscated from the Dominican vessel at the time.

Sr Lt Sturrup and HMBS Madeira also led this most recent arrest and was the ship that engaged in gunfire with the poachers, after the Dominicans were reportedly the first to fire at the marines.

“On Friday past, HMBS Madeira was dispatched from HMBS Coral Harbour base on routine patrol,” he said. “While in the area of the southern Bahamas, near Cay Lobos, we got reports from base that there was a likelihood of Dominicans operating in that area.

“Upon approaching that area we noticed the Dominicans’ small skiff and three ships. We pursued them. They headed towards Cuba, only 14 miles separating the Bahamas. In the channel we made an attempt to board the vessel. They resisted with violence…[firing] at us. We exchanged. We were unable to stop them before they left Bahamian waters.”

Sr Lt Sturrup could not provide any information on the number of weapons that were uncovered or the number of shots fired, saying the matter is still under investigation.

However, he confirmed that no Dominicans were injured.

“We interviewed them, we searched them before they came on our ships and no one had any injuries on them,” he said. He added language barriers are overcome through language apps and bilingual poachers who sometimes serve as translators.

Sr Lt Sturrup noted the Coral Harbour base assisted them with the chase and coordinated with Cuba. However, he could not say what happened to the Dominicans in Cuban waters.

According to a RBDF statement released on Sunday, one of the Dominican vessels ran aground in those waters.

Commodore Bethel noted this has been the largest arrest in the last year.

“This is the fifth arrest of (a) Dominican vessel for the year,” he said. “Very proud of the work that Sr Lt (Sturrup) and his crew members have done, because out of the five vessels that have been arrested this year, he and his crew account for four of those arrests, totaling almost 200 Dominican poachers. So very proud of what they’ve done and we will continue with this effort.”

I wonder if these men in the pic are the real criminals or if someone is sitting in the Dominican Republic in a nice cushy office waiting to send out the next disposable crew. You know like the mouse do down in Eleuthera, Nygard do at Junkanoo and our politicians do year round. Their fingernails is be clean clean