Face To Face: From Pupil To The Preacher They Said Would Never Last 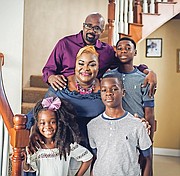 Pastor Williams with his wife Cleopatra and children Jaleel, Justin and J’Lynn.

My high school friend Valentino Williams has always been the kind of person to do things on a big scale. I always saw great ambition in my schoolmate. He would come up with great ideas and get people to join in. He could be a fierce competitor in schoolwork as well as in basketball, track and field.

But Valentino was also a bit mischievous – getting into typical boyhood antics one after the other, and always having a laugh about it all afterwards. So when he told his schoolmates he was “saved”, many of them laughed at him. It seemed hard to perceive “Valley” of all people could be saved and sanctified and have a complete about-face, especially because he was popular, fun-loving and had a lot going for him.

Even though there were many laughs and scoffs as he went around telling everyone of his newfound spiritual epiphany, somehow I knew he was serious. We were close in grade nine and if it was one thing I knew about my schoolmate, it’s that he wasn’t one to make any kind of big declaration and not mean it. It baffled us all.

But somehow, he was announcing back then what would become the path of his life. So, it was no surprise to me that Valley, now Pastor Williams, one who always loved to do things big, would be the one to write a book entitled: “Go Big or Go Home.”

“My most memorable moment of school (St Augustine’s College) was when I gave my life to the Lord in the tenth grade, which was in April of 1993,” Valentino recalls.

“It was a shock to my classmates and friends that I made such a drastic change. No one saw it coming. Many of them didn’t really believe I was sincere in my newfound relationship with the Lord and basically gave me weeks (I can clearly remember who said it) to remain in the faith. Twenty-five years later, I am still going strong!”

He was 15 years old back then. Maybe somehow his primary school, Nassau Christian Academy, had a subconscious influence on him, coupled with the religious routines that made up the daily life at St Augustine’s. He graduated high school in 1995 and preached his first sermon by the age of 17. He spent a year at Success Training College before going off to Murray State University, where he held numerous leadership positions in Chi Alpha Campus Ministry, a nationally acclaimed campus ministry in the US.

Ministering at Bacardi Road park, where the parents of this child in a wheelchair brought him up to be prayed for.

By the time Valentino was 20, he was a licenced and ordained minister and served in just about every capacity in the church. He also attended many workshops locally and internationally to augment his spiritual walk.

Eventually, Valentino had another epiphany; this time, to start a church: “On Oct 15, 2001, at 6:40am, the Lord spoke to me and told me to start a church. He was very specific in the type of people that He called me to minister to and the method of operation I was to employ. I was taken aback by this new-found assignment (never my desire to be a pastor) and spent the next two years praying and seeking His direction on how and when this church was to start.”

On April 20, 2003, Valentino got that start. He rented out a storefront on Pitt Road – a narrow, winding road in a tightly-knit community between Horseshoe Drive and Boyd Road. He wasn’t affiliated with any other religious organisation, so he didn’t have much outside help. However, with the little resources and abundance of faith he has in this new calling, he opened Life Changers Ministries International under the theme: “Up Out of the Ground.”

“Beginning my own church was a faith journey,” he said.

“I had never done this before and very few offered help to show me what to do. I had to rely totally on God! I did endeavour to listen to Him each step of the way. I read books on how to start a church, attended conferences both locally and internationally and reached out to a few mentors for help, all in an attempt to arm myself for this new task ahead of me. The process had its challenges, but there were some real good days and there was some days I wanted to throw in the towel. But God kept me!

“The first few years of ministry were very challenging. People were not committed. They would join one year and the next year they would be gone. There were many days when I became discouraged because the progress was seemingly slow, but I kept focused on the vision God had placed in my heart.”

Five years into the Ministry, Valentino had a burst of new energy when he was able to acquire just under an a half-acre property for the church. In May of 2008, the church relocated from Pitt Road to its current Bacardi Road home. His members worshipped with him under a tent in Bacardi Road.

Life Changers Ministries continues to grow in its new facility, with a robust membership of 1,200.

Then another challenge arose: “The ministry again was in transition because while we were excited about the move and what would be our permanent location, many people still didn’t buy into the vision. The tent ministry was not a ministry that many wanted to be a part of.”

In June of 2009, Life Changers moved into a 3,000sq ft prefab building that was designed to be a holding facility. Despite many challenges including the weather, break-ins, and inconsistency of membership, Valentino and those devoted to his vision continued to press on. For seven years, they remained in the prefab facility and began to see the fruits of their labour.

“During this, the ministry began to find its identity,” Valentino said.

“People began to believe in us. We experienced exponential growth during this time, and the ministry began to mature. Everything was moving in an upward direction. During these seven years we held major community outreach initiatives and launched our television ministry. We had to run three services to accommodate the growth.”

In 2014, Life Changers broke ground for a new place of worship and in 2016, the church moved into its newly-constructed, 21,000sq ft, three-storey facility and had a robust membership of around 1,200 which is consistently growing.

Young couples, professionals and people in the community of all ages connect with Valentino and his messages seem to resonate with them, and his down-to-earth and insightful reputation precedes him.

Valentino says he owes his level of perseverance and dedication to a goal from his father, Kirk Williams. He grew up with his father and his stepmother, Linda Williams, and spent weekends with his mother, Sharel Maura. By the time he was 15, his father put the keys to the family business, Carpet World, in his hands. He was responsible for opening and closing the shop every weekend and school break, including summers, mid-term, Easter and Christmas.

“My dad firmly believed that hard work was a prerequisite for success in life,” he said.

“When I went off to college and came back on summer breaks, I was at work. For special projects or contracts, I was made a foreman and often worked ten to 12-hour days almost every day. My dad drilled into my head for years... ‘an eight-hour work day is only sufficient to pay your bills’. Anything extra outside of the eight-hour work day will allow you to have disposable income.

“I also learned the importance of hard work through my father’s work ethic. He lived to work. He got excited when a big project came around. Never one day in my entire life did I ever hear my father complain about work. My Father is my earthly hero! He moulded me into who I am today by his exemplary work ethic, positive outlook on life and kindness toward mankind. He taught me how to work and the importance of having a ‘make it happen’ mentality.”

Valentino has packed all his life lessons into his book which he launched last week at Ocean Club Paradise Island. He shows how The Bible is filled with scriptures that could lead the reader towards massive self-improvement in areas such as attaining goals and reaching the success that so many people desire.

“You cannot look at the size of what you have in your hands and allow it to dictate the size of your dream or vision,” he writes, and “In order to move forward and begin to change your thinking, you must undergo a massive mind renovation and reconstruction process,” he said.

As he believes “thoughts are the foundation of everything we do in life”, Valentino guides you on how to control your mind, how to overcome barriers to thinking big, how to safeguard your dream, and much more. This book, he says, is a 25-year journey of his walk of faith – “how I think, operandi… my life story”, birthed in his deeply-rooted desire to “see people live their full potential and unlock the seeds of greatness within them”.

“Go Big or Go Home” can be found at Logos Bookstore in the Harbour Bay Shopping Plaza and the Bible and Gift Shop in the Palmdale Plaza. It is also available as an audio CD..

Life Changers Ministries meets on Sundays at 9.30am. Email lifechangersministries_intl@yahoo.com for more information.

Congratulations! It takes a lot for men to remain committed to God. May your ministry continue to be guided by God.