Man Accused Of Robbing At Gunpoint To Snatch $6,000 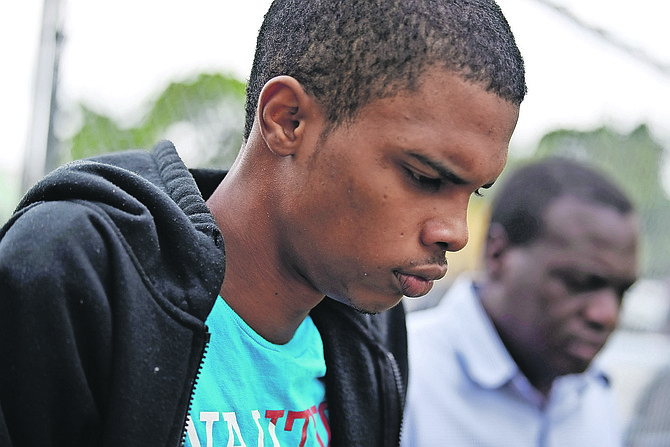 A 20-year-old man was charged yesterday with robbing four persons, including an officer, at gunpoint of more than $6,000 worth of cash and merchandise over a two-day period, then attempting to kill someone else just five days later.

William Wong, of Regency Park, stood before Chief Magistrate Joyann Ferguson-Pratt charged in connection with one attempted murder and five separate armed robberies that took place between September 30 and October 6.

He is alleged to have committed the armed robberies with a .22 Mossburg rifle, for which he was also charged with possession of a firearm while committing an indictable offence.

Meanwhile, another man, 24-year-old Jovaughn Joubert Pierre, was arraigned on allegations he robbed six people at gunpoint of $10,931 worth of cash and merchandise between September 28 and October 14.

Concerning Wong, it is alleged he attempted to murder Roobens Elusme on October 6.

He is also accused of receiving a ZTE cellphone and a Thunder dog battery power pack, knowing the same to have been obtained by the commission of an offence, on October 1.

Also on October1, Wong is accused of using his rifle to rob Police Constable 3629 Mills of $80 cash and a set of keys. That same day, he also robbed Earthlyn Pratt at gunpoint of one silver and black Samsung Edge cellphone worth $500 and one brown wallet worth $100 that contained $130 in cash.

He also allegedly robbed Amanda Walkine of a pink and white iPhone 6 worth $500.

Concerning Pierre, it is alleged that on September 28, he, while being concerned with another, robbed Rheavincia Rolle at gunpoint of a black Huawei phone worth $200; a Commonwealth Bank card worth $10; an Amazon Fire tablet worth $200; a black Alcatel wireless receiver worth $85 and $800 in cash.

He is also alleged to have robbed Vanrea Rolle at gunpoint of a Samsung J2 cellphone worth $150; an NIB card worth $10; a Bahamian passport in Rolle’s name worth $50; and $6 in cash on that date.

On October 15, it is alleged that Pierre dishonestly received one Commonwealth Bank card worth $10; and a black, Alcatel wireless receiver worth $85.

On October 6, Pierre allegedly robbed Paulette Smith of one beige handbag worth $20; a Bahamian passport worth $100; a Bahamian driver’s licence worth $50; an NIB card worth $10; a Commonwealth Bank card worth $25; two Bank of the Bahamas (BOB) cards worth $50; and one silver Samsung J3 Prime phone worth $230.

He is also alleged to have dishonestly received one Bahamian driver’s licence worth $50; a Commonwealth Bank card worth $25; and two BOB cards worth $50 sometime between 8pm and 10pm on the same date.

Neither Wong nor Pierre were required to enter a plea to any of the charges and the matters were adjourned to November 12 and December 6 respectively for service of their voluntary bills of indictment. Bail was denied and the two were remanded to the Bahamas Department of Correctional Services (BDCS) in the interim.

They have a right to apply to the Supreme Court for bail.