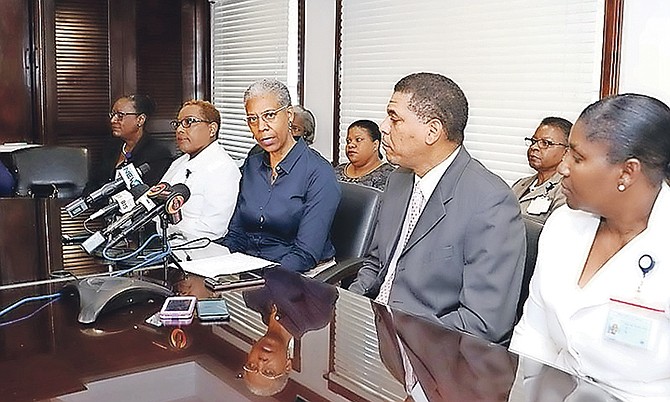 THE Public Hospitals Authority appeared to be on a collision course with nurses yesterday, announcing it will implement a new shift system for them on December 10 despite objections from the Bahamas Nurses Union.

The shift change was initially planned for September 3 but was shelved following uproar from nurses.

It was hoped that the two sides would resolve the dispute but BNU president Amancha Williams said yesterday that little negotiation has taken place since September.

The shift change from four on/four off to five on/two off was announced by PHA Managing Director Catherine Weech during a press conference yesterday.

The change is consistent with the Bahamas Employment Act, the 2015 Industrial Agreement between PHA and BNU and an agreement the parties reached in 2014, she said.

BNU disputes this, however, emphasising that the 2014 shift change agreement was not contained in the 2015 Industrial agreement, making it inapplicable.

The system establishes a 40-hour work week and an eight-hour daily shift “as opposed to the current ten-hour shift for night duty nurses,” she added.

She revealed that nurses scheduled to work between 6pm and 6am will receive a $1.75 per hour premium in addition to their standard base hourly pay.

That sum was immediately derided as inadequate by Ms Williams in a later interview with The Tribune.

“That was the proposal for four years ago,” she said. “Who works for that when coming out of school with a bachelor’s degree and higher?”

Ms Williams said she was blindsided by the PHA’s announcement. She insisted nurses will fight back but refused to divulge how.

“The prime minister himself will come off his throne, him and the minister of health will have to speak to us as nurses, we will come together with strong force, they will not stop us,” she said.

Nurses overwhelmingly supported a strike during a poll this summer but the government has denied them a strike certificate, telling the press the poll failed to give every nurse an opportunity to vote.

Ms Williams said this rationale has not been formally articulated to the union. The union is considering how it will respond.

Privately, government officials say a motivating factor behind the shift change is a desire to reduce overtime pay for nurses. They believe the resistance to the change reflects nurses’ desire for continued overtime pay.

Ms Williams had hoped that Prime Minister Dr Hubert Minnis would step in to prevent the shift change from going into effect, but his summer intervention has borne little fruit, she said.

"Nurses overwhelmingly supported a strike during a poll this summer but the government has denied them a strike certificate, ..."

Slaves get back on the plantation and pick that cotton !!! (and pay 12% for the privilege).

These frigging Unions are holding the country hostage .......... how can we justify someone working a full time job and working less than six months of the year??? ....... Bullshit!!!!!!!

@sheeprunner, there is no justification, and to make matters worse, many of them do not have nice attitudes.