Alicia Wallace: Everyone Has Their Say - Then The Back-Pedalling Begins 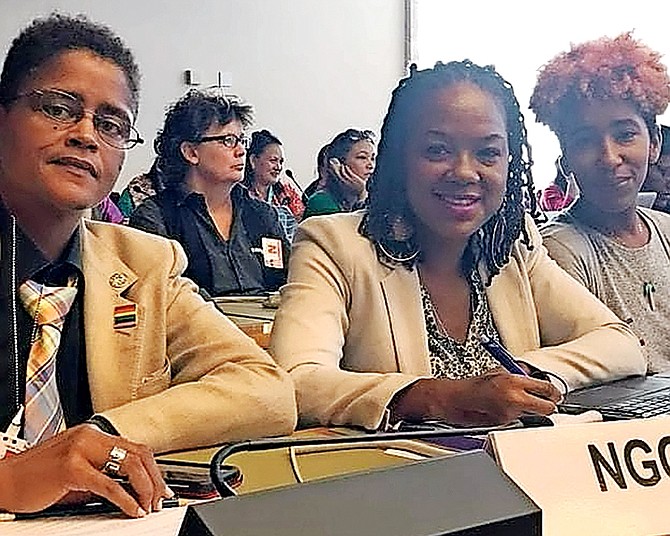 From left: Erin Greene, Noelle Nicholls and Alicia Wallace in Geneva for the CEDAW conference.

The Government of The Bahamas faced review by the Convention on the Elimination of All forms of Discrimination Against Women (CEDAW) Committee during the 71st session at the United Nations in Geneva. The review followed the submission of the State’s report on progress made since the last submission, tabling of shadow reports by three non-governmental organizations (NGOs) — one of which is publicly available — and oral statements and a private meeting with NGOs.

It is clear the CEDAW Committee does not rely on the State report, nor does it depend on shadow report to give a fuller picture of the State under review. Committee members conduct their own research including, but not limited to reading national newspapers.

Awareness of issues of national concern and general public sentiment around hot button issues was demonstrated in the questions posed and comments made by Committee members during the dialogue with the State.

Knowing it is important for Bahamians to know what the government of The Bahamas is saying and doing in international spaces, I am sharing my own account of some of the key points that arose during the first part of the session.

Minister of Social Services Frankie Campbell led the government delegation and brought an introductory statement and led in responding to most of the questions from the Committee. In his statement, Campbell made reference to his daughters as the reason for his commitment to women’s equality, referred to CEDAW as “a journey, and not a destination,” and said

The Bahamas will, one day, lift the reservations on Articles 2a and 9(2) concerning non-discrimination on the basis of sex and nationality — issues central to the referendum of 2016. He noted the government is drafting amendments to the Nationality Act to give Bahamian women, upon application, the ability to confer citizenship on their children regardless of where they are born.

He spoke about the national machinery which was an area of concern for Committee members and was referenced in shadow reports and NGO oral statements. Campbell noted the 250 percent increase in budget for the Department of Gender and Family Affairs, the strategic plan for ending gender-based violence (not yet adopted), and updates to the national gender equality policy which, he said, is going to Cabinet soon.

Reference was made to a number of other activities including a needs assessment survey in the Family Islands and financial partnerships with organizations such as Civil Society Bahamas, Bahamas Crisis Centre, Families of All Murder Victims (FOAM), the Governor General’s Youth Awards, and Great Commission.

The CEDAW Committee expressed concern about sex-based discrimination, and a Committee member called the “no” vote on bill four “distressing”. She asked the government to give concrete steps it will take to the issue, and directly asked whether or not it will set a fixed date for the next referendum that is not near a general election, do it in a nonpartisan agreement, and engage civil society in managing the process.

She also asked the government if it will reform existing legislation to safeguard against sex-based discrimination as with the Employment Act. The Committee member also asked the government to commit to protecting women and LGBT+ people from discrimination and provide avenues for redress, especially for migrant, differently-abled, and LBTQ+ women.

In his response, the Minister said The Bahamas is a democratic nation and the government cannot change the constitution. He confirme the government will make amendments to legislation, but said he could not give a timeline. He agreed to including civil society in the process. Jewel Major from the Attorney General’s office said the AG asked for a review of legislation to see which do not have a non-discrimination clause. Among legislation under review is the Education Act.

The Minister told the CEDAW Committee the government is aware of its shortcomings and is open the Committee’s recommendations. In response to a question about providing comprehensive protection against discrimination on the basis of sexual orientation or gender identity, he suggested it is a new concept and the government is committed to having the conversation so we can all “coexist in harmony”.

Family Island women are women too

A number of Committee members asked specifically about Family Island women and their access to resources, day-to-day experiences and access to justice. Campbell spoke about stigma of reporting in a small community, and said saving lives is more important. He went on to say there is a need to “removed [the] spirit of dependence” so that women could report gender-based violence more easily. Major added that most islands have a resident magistrate and video conferencing is available to hear matters for other islands.

A Committee member asked when the national strategic plan and policy will be implemented, and what frameworks exist to guide and monitor compliance with CEDAW. She also pressed the government on temporary special measures beyond the political leadership course. These questions were not sufficiently answered, though it was said the national gender policy has expired and experts have been reconvened to update the document.

Director of Gender and Family Affairs Jacinta Higgs spoke about the under-resourcing of the department. She also pointed out staff from other areas within the Ministry are providing support, UN Women is providing specialized training and the Department is making a “progressive thrust” to work with NGOs.

Higgs noted the need for tech support in the area of research and data collection, and the request for assistance from University of the West Indies’ Institute of Gender and Development Studies and University of The Bahamas. The lack of statistics came up several times throughout the session, and this lead to the Committee advising the government to take steps to remedy it.

This is the way the session went for five hours. The CEDAW Committee posed a set of questions, the government delegation had the opportunity to respond, and when time permitted, follow-up questions were asked and answered. In some cases, the delegation struggled to answer questions.

This happened for various reasons including lack of data or access to it, hesitation in making a commitment and general unfamiliarity with terminology and concepts.

It stressed its willingness to work with NGOs and recognition of the experience and skills of the organisations and people working on issues of gender and women’s rights.

The art of the back-pedal

In my oral statement, I raised two important issues. I noted the Government of The Bahamas has failed to inform the Bahamian public about its CEDAW commitments, how CEDAW can be used as a tool for women, and ways for its (non)compliance to be monitors. There is also the issue of the government responding to issues, as it did with the CEDAW Committee, with information and commitments that it ignores or denies in The Bahamas.

We saw this play out as if scripted over the past few days. Senior Nursing Officer at the Ministry of Health Sherry Armbrister told the CEDAW Committee about work on a patients’ bill of rights which “will pave the way for […] the right for a woman to have [an] abortion.” The Attorney General and Minister of Health both deny that a change in the law is under consideration. Sands also said reproductive rights are not on the list of priorities.

This sentiment was certainly not expressed to the CEDAW Committee. It is possible this bill was in the works, but officials are not prepared to have a national conversation about abortion. It is also possible that someone is misinformed, or members of the delegation were prepared to deceive the Committee, perhaps in an attempt to prevent it from including a recommendation to legalise abortion which would require the government to act on it before the next review.

The Bahamas ratified CEDAW by choice. We are not being forced to take any particular actions. The government has committed to expanding and protecting the rights of women through domestication of CEDAW — the women’s bill of rights. Review by the CEDAW Committee is a built-in monitoring and evaluation system wherein members review submitted reports, conduct their own research, engage in constructive dialogue with officials and make determinations about the country’s progress since the previous session.

At the end of the 71st session, the Committee will publish concluding observations which including recommendations for the government that it will be expected to act upon and report on at the next review. As citizens, it is important we pay attention to this process and engage as much as possible as the government works toward fulfilling its commitment.

We will only benefit by knowing what has been promised and demanding it. Look at the abortion conversation. The back-pedalling has already started, but we already know what was said. That, in and of itself, is power in our hands.