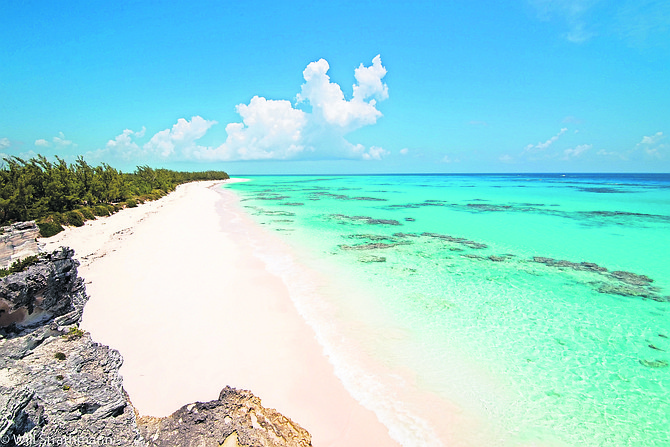 DISNEY Cruise Lines has made a presentation to the Bahamas Chamber of Commerce and Employers Confederation (BCCEC) regarding the company’s proposal to develop a destination at Lighthouse Point, Eleuthera.

This comes as activist groups, including reEarth and Bahamas National Trust, have increased calls for the government to protect Lighthouse Point from commercial development.

BCCEC chief executive Edison Sumner confirmed the meeting to The Tribune yesterday, adding additional meetings with other stakeholders, including Bahamas National Trust and One Eleuthera Foundation, will be held in the near future.

Lighthouse Point is a privately owned 700-acre peninsula at the southern tip of Eleuthera. Its proposed sale has been the subject of much controversy in recent weeks.

Environmentalists have been outspoken in their disagreement with the matter. During a press conference held on Friday, they called for the entire property to be protected from commercial development.

On Friday, the BCCEC released a statement regarding the meeting.

“At Disney’s request, (the BCCEC) briefly met with Disney executives today (Friday) to receive a presentation regarding Disney’s proposed expansion in the Bahamas, namely a second managed destination at Lighthouse Point at the southern tip of Eleuthera,” it noted.

According to the statement, they presented Chamber directors with a preliminary overview of the company’s intentions.

“The meeting included discussions on the project’s design and development, the economic and environmental impact on South Eleuthera, public access, and conservation objectives,” the BCCEC noted.

The Chamber hopes to engage in “further dialogue” with Disney and other stakeholders in the Bahamas, “to learn more about their perspectives regarding Disney’s proposal for Lighthouse Point and welcomes requests for discussion,” the statement concluded.

Mr Sumner told The Tribune these other stakeholders include the BNT and One Eleuthera Foundation. He added no dates have been set for the meetings as yet, but the Chamber expects them to be held “over the next couple of weeks”.

“It is important for us to hear all sides of the divide on this project, including the government,” Mr Sumner said.

“Since we have heard from Disney, then it is only reasonable for us to hear the others as well.”

“We recently met with Disney representatives, and while we appreciate the update they provided us regarding their plans, we at the BNT feel strongly that the best use of the Lighthouse Point area is as a national park – for all Bahamians, visitors and future generations to enjoy,” Mr Andrews said.

The BNT also described Lighthouse Point as “perhaps the most significant undeveloped area left on the island.”

Standing with residents and non-governmental organisations alike, the BNT said is it “(imploring) the government not to allow the modification of this area from its pristine condition to a mega cruise ship pier and private beach facility.”

On Thursday, Tourism Minister Dionisio D’Aguilar said although the property is privately owned, the government will not sanction the commercial development of the actual lighthouse site or the surrounding beach.

Eric Carey, BNT executive director, said while he commends the minister’s statement, the property “is larger than just some tiny little space” and the whole area should instead be preserved for more sustainable development and sustainable long-term jobs.

Mr Carey added environmentalists “do not accept” the idea that a cruise ship port could “co-exist” with what they are proposing.

“We don’t think that any type of unsustainable development, which is what the cruise ship concept is, is acceptable at the peninsula of the southern tip of Eleuthera,” Mr Carey said on Friday.

“And we’re encouraging government to reject the sale to any entity that does not guarantee…sustainable development.”

Mr Carey said sustainable alternatives for the site development include a research facility, small eco-lodge, and a national park component. The jobs provided by these initiatives could rival the numbers of those provided by a cruise ship port, he added.

“(The cruise line is) saying they can produce 100 jobs, 120 jobs. We know that that site directly could produce 120 jobs,” Mr Carey said.

“While we understand that the Bahamas has basically followed one mode of development for the past 50 years – foreign direct investment, it often comes with the high price of lack of transparency, degraded communities and environments,” she said.

“We cannot stress enough that a cruise port that decimates the environment, restricts access, and has a one-sided economic benefit, for the cruise ship company, is no longer a business model which benefits or sustains the Bahamian people or our fragile environment.”

Mrs Duncombe added the environmental organisation Mission Blue has added Lighthouse Point as one of its “hope spots.” These are “special places that are critical to the health of the ocean — Earth’s blue heart,” Mrs Duncombe said.

Disney must not be allowed to desecrate yet another pristine area in the Bahamas. Let's look at their Castaway Cay property. What have the done for the Bahamas and Bahamians? A few paltry jobs to clean up after the hordes of tourists leave. Disney has their own staff on the ships and bring them ashore when the ships are in port. So what kind of jobs will they bring to Eleuthera? Is it worth a few low-paying jobs?

And there's no way to make a place "sustainable" with 2500+ people being disgorged from these megaships 4 or 5 days per week. No way!

Disney must go elsewhere -- go find a nice US property in the Florida Keys to destroy and leave the Bahamas alone!

Is there anywhere we can see exactly what Disney's plan for the point is. There are not any details in this article. Are they just copying what they are doing on their private island?

How is it the vision crown's comrades PM, KP, Carl Wilshire, Dionisio James - along with the "Most Propitious" Jeff Lloyd - become so ministerial complicit permitting Disney Cruise Lines, have made an abrupt course altering detour away from Ragged Island - to cruise on over another island destination at Lighthouse Point, Eleuthera to make their 'crown private island crab' presentation before Bahamaland Chamber of Commerce?

Didn't the residents say no?

If Government allows this we will only assume that their pockets have been filled with Disney currency. A polite thanks but no thanks should suffice. Florida Cays are a grand idea!

Comrade DDK, I'd say that's one take on the evolution of the 'all-inclusive' crown members cabinet.. wouldn't you say, certainly something new and pocket-ling strange may be happening we once so on ya best Britsh honour colony islands... Here's hoping you made all that spontaneity up.

This is private property , the owners have a right to sell .I,m a boat capt that travels all over The Bahamas ,most of our Islands ,except for Nassau are underdeveloped including Eleuthera . We have cays and Islands from Abaco in the north to 40 miles from Cuba in the south ,,this is what we sell ,sun sand and sea . Even in the Exuma cays which I just ran 2 days ago less than 15% of the cays are developed if that .Many of the family Islands including Eleuthera apart from settlements here and there are "barren " and need more development

Why? Undeveloped would be a better point of difference unless you want to end up like Amsterdam, Dubrovnik, Venice etc. where they are so tramples under by tourists that they are beginning to have to turn them away.

There are so few unspoiled places left on this planet. Why destroy the Bahamas by developement?

our out islands are very underdeveloped ,including Eleuthera ..I,m not talking about over development , but we need jobs .We are coral rocks that w our high energy cost and under educated work force are not going to become production centers . This is what we have to sell ,sun ,sand sea .Have you been around the out islands/family Islands ,,apart from tiny populations in spread out settlements they are "barren" Andros ,San sal ,Cat , Aklins could all use a Disney type port and there would still be miles and miles and miles of solitude if you want

Point taken, but how many Bahamians have Disney given jobs to on their other island?

I agree we need development but lookking at what they promised and did not do here in Grand Bahama has me saying go to the Florida Keys!

"#However, he said the debate is continuing as to whether the entire property will be deemed “off-limits” for commercial development or if the government will allow a portion of it to be developed."

What that means is they will close off and develop the area that makes the beach accessible by land. Then they will heard all the black people to a small section of the beach and say see? You still have access. We've seen this movie before. Drove along the coast today and it's really a tragedy how business interest has taken away access to beaches in Nassau. Look at the crap going on at Junkanoo beach and the Pointe. Now they want to take the view of the skyline too and tell you it's progress. We're an island and we have no beach.

This govt has zero imagination, they're always operating from a we have to sell ourselves for pennies position. Just the other day they were selling off four national parks to a convicted fraudster to build an oil refinery

If the Government is OK with buying the hotel in Freeport why not buy Lighthouse Point?? By the way does anyone know who actually owns the property??

Would be interesting to be able to compare each Caribbean island/country's deal with the cruise lines. I'd be willing to bet we give away more, but i'm sure all islands do to some extent. These cruise ship private cays do nothing more but make those communities dependent on a cruise line, which works them for pittance pay, long hours and no benefits. I'd be surprised if they follow Bahamian labor laws.

Now if we all got together and changed the game.......... They'd have too many ships and nowhere to go.