Sands Due In Court To Explain Contract 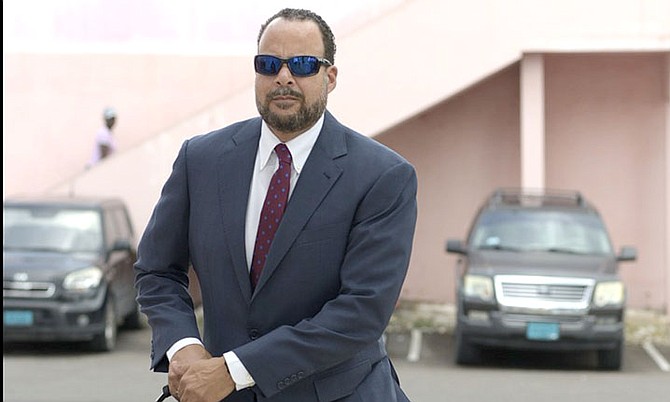 HEALTH Minister Dr Duane Sands is expected to testify in court today about his decisions regarding the approval of a $1.8m contract to the company owned by the virtual complainant in former Progressive Liberal Party Senator Frank Smith's criminal trial without the approval of the Public Hospitals Authority's board of directors.

The news came after PHA legal advisor and board secretary Leslie Isaacs agreed with suggestions from Smith's attorney that the approval of the contract to Barbara Hanna's Magic Touch Cleaning Company was tantamount to a "breach" of standard PHA procedure.

As the witness took the stand before Chief Magistrate Joyann Ferguson-Pratt, lead defence attorney Keith Knight, QC, submitted to Ms Isaacs that the correct procedure would have been for a sub-committee of the board to forward its findings and recommendations to the PHA's board for approval, to which Ms Isaacs agreed.

During previous proceedings, Ms Isaacs testified that contracts totaling $250,000 or less could be approved by the board without input by the minister of health or Cabinet. She also said at the time any contract above the $250,000 threshold would need to be reviewed and approved at the ministerial level.

It was also revealed that Magic Touch Cleaning Company was awarded the contract on October 30, 2017, notwithstanding it being the second to lowest bidder at the time. The lowest bidding company, meanwhile, had its bid rejected because its bid was found to be "unrealistic," according to lead Crown attorney Edward Jenkins, QC.

Mr Knight suggested to Ms Isaacs that as normal PHA policy, the board would look closely at recommendations for the approval of contracts to any company that is not the lowest bidder, something he suggested concerned the revenue side of the PHA's operation.

However, Mr Knight asserted that the board did not have the opportunity to examine why any entity other than the lowest bidder was selected for recommendation in the present case, as the contract had already been approved by the minister of health.

In response, Mr Jenkins submitted that the issue boiled down to whether Magic Touch being awarded the contract stemmed from a "technical" decision as opposed to a "sinister" motive, and stressed the lowest bidder's disqualification for its "unrealistic" bid.

During previous proceedings, Mr Knight highlighted segments of the minutes from a December 14, 2017, PHA board meeting, where the contract awarded to Mrs Hanna and the process through which it was awarded, was referred to as unfortunate.

The minutes also noted the million-dollar contract was never brought to the board for discussion.

Additionally, the board said it had concerns about the contract.

At the time, Ms Isaacs confirmed that the minutes reflected the views of the board, and also explained that PHA regulations do not permit a contract to move from the Analysis Committee, another sub-committee of the PHA board, directly to the minister of health.

The minutes revealed that the board was so concerned, it thought it necessary for the director of internal audits at PHA give a chronological report on what exactly transpired during the review and approval of the contract.

Yesterday, however, Ms Isaacs said as far as she was aware, no action was taken regarding the internal audit report. That prompted Mr Knight to suggest that as the PHA board's secretary, Ms Isaacs ought to have been made aware of any action being taken on that issue.

Smith pleaded not guilty to all the allegations during his arraignment last July.