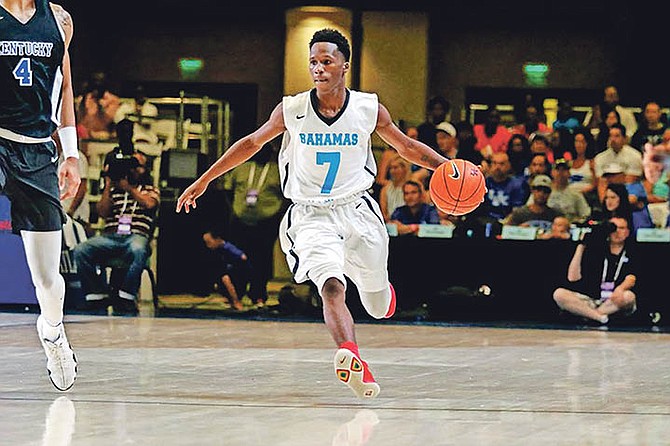 JUNIOR national team standout Dominick Bridgewater is making his transition toward professional basketball and dominated his experience on the court in France.

Bridgewater was named the MVP of last weekend’s preseason tournament of Avant Garde Tain Tournon Basketball Club in Tain, France. He averaged 18 points and 11 assists per game for the Fos-Sue-Mur Provence Basketball Byers Epoirs team and will spend much of the regular season working against the Byers A-League team, which includes Jaraun “Kino” Burrows.

The Epoirs team also competes in the league consisting of all of the junior divisions of each team in the LNB French Pro A League.

Burrows will continue his career in the LNB French Pro A League for the upcoming season after he reached an agreement on a contract extension with the Byers earlier this summer.

He said that in a short timespan, Bridgewater has already made an impression on the coaching staff in France.

“Coach Jean-Phillip has told me he’s very excited to have Dominick and that he’ll play him at the one and some two,” Burrows said. “Even though it has been a short time he sees Dominick as a quick and explosive player with great vision. He needs to improve his shooting and shoot off the dribble but Jean-Phillip is very excited to coach him in the junior ranks and to help him to achieve his goal of becoming a professional.”

Bridgewater, 18, recently had an opportunity to compete against the University of Kentucky Wildcats as a member of the Bahamas’ select squad. He led the team to the 2017 GSSSA Senior Boys Championship and for the past two editions of the National High School Championships, he was the tournament’s leading scorer and was named an all-tournament selection.

At the junior national team level, Bridgewater was also a member of a pair of squads to represent the country.

In 2016, he won MVP en route to leading the Bahamas to the gold medal of the Caribbean Basketball Confederation’s Under-16 Tournament when he averaged 18.2 points and 3.8 assists per game. He followed with an appearance at the Centrobasket Under-17 Championships where he averaged 24.8 points, 8.4 rebounds and 3.6 assists per game.

He was also selected to represent the Bahamas at the Basketball Without Borders Americas Camp in 2017.

Basketball Without Borders features the top 66 boys and girls from 16 countries and territories in Latin America and the Caribbean. “It was normal, it was fun, we still had to play hard and put your all into it because they’re coming to compete hard as well,” he said about the camp. “I took away a lot, getting information from them to increase my game to make me better.”