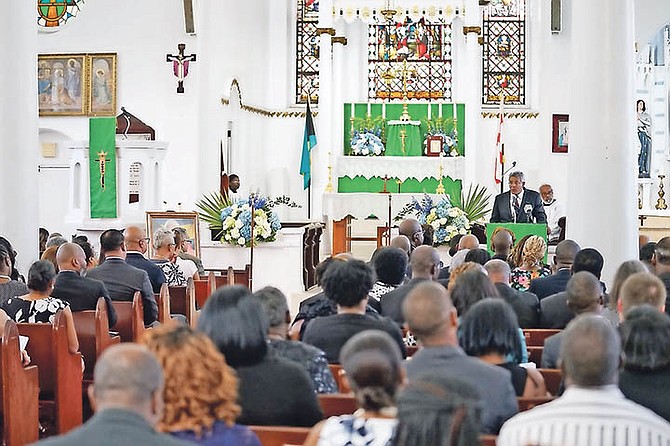 A STATE funeral for Chief Justice Stephen Isaacs will be held on Friday at Christ Church Cathedral beginning at 11am.

Isaacs' body will lie in state at the Supreme Court in Bank Lane today. The public can view his body beginning at noon until the funeral on Friday.

The Cabinet Office announced that the country will be in a state of mourning until after Friday's funeral. All flags will be flown at half-staff during this period.

Isaacs, 63, died on August 24, just two weeks after he was officially sworn in to the substantive post of chief justice, filling a post left vacant by the retirement of Sir Hartman Longley last year.

After his death, he was recognised in a Cabinet statement as a "judge's judge…the epitome of the highest standards of conduct of a judicial officer; and for upholding the Rule of Law, justice, order and proper decorum in his courtroom."

Justice Isaacs, according to the government's release, was called to the Bahamas Bar in 1982 and started his judicial career some 12 years later in 1994 when he was appointed assistant registrar of the Supreme Court.

Throughout his career, he also served as registrar of the Court of Appeal, and on the Industrial Tribunal, before being appointed to the higher judiciary as a Supreme Court justice in September 2002 when he assumed office as an acting justice of the Supreme Court and was stationed in Freeport, Grand Bahama.

In 2015, he was promoted to the rank of a senior justice of the Supreme Court, and appointed acting chief justice in December, 2017.

He was confirmed to the substantive post in July this year.

Justice Isaacs is survived by his children, Stephen Jr and Capri.

Earth, RECEIVE AN HONOURED GUEST, A GREAT BAHAMIAN WILL BE LAID TO REST!!!