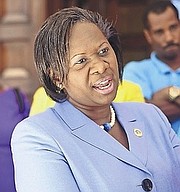 BAHAMAS Union of Teachers President Belinda Wilson yesterday called on the government to relocate eight and ninth graders at A F Adderley High School due to ongoing construction.

Mrs Wilson told The Tribune she met with officials yesterday to discuss alternative sites as the construction work made the area unhealthy and unsafe even though it was fenced in.

Construction is expected to be completed by the end of October, she said.

"The seventh graders are back at the Hotel Union building where they have been now for over a year," Mrs Wilson said. "What we would like to happen is for the eighth and ninth graders, and their teachers and relevant administration to be relocated to alternate sites. We discussed this would allow contractors to complete school and students can return for a target date of after mid-term break.

"They are saying works should be done by end of October. They are doing some heavy work, concrete work, knocking out walls, connecting passage ways, there are big trucks. The work site fenced in, but you have dust, you have noise. There are children and teachers with asthma, what we are saying is it would be better for them to move from the site completely and allow for construction workers to go straight through and meet the target by end of October."

Mrs Wilson added: "It's unsafe and it's unhealthy. First and foremost the priority would be the health and safety for children and teachers."

The start of the new school year has been marred by ongoing repairs, and teacher shortages that the union claims are affecting classrooms nationwide.

Yesterday, Mrs Wilson said she believed both the Ministry of Education and Ministry of Public Works dropped the ball.

"You're not even clear about who is responsible for what," she said.

"What I would really like to see going forward is that when schools open, we are ready to occupy and begin teaching as soon as possible. Children are really losing a lot of instructional time."

The FNM is more concerned with appearing to have the schools opened on time than the safety of the kids..

Well blow me down.