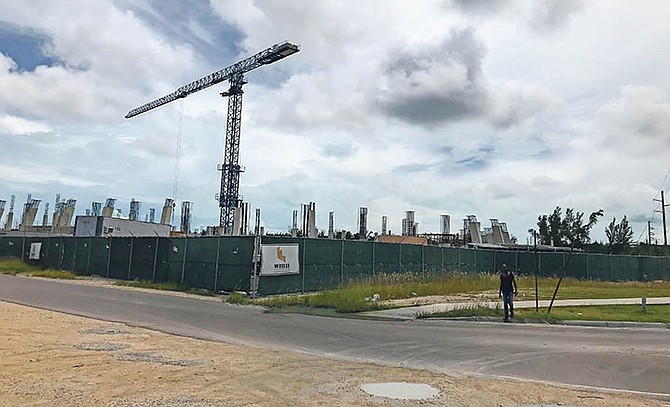 ALTHOUGH there were some discrepancies on the huge price tag for the completion of the new Andre Rodgers National Baseball Stadium, former Senator Greg Burrows Sr is calling on government to clarify the vast increase of the construction.

“In the initial stage, it started off with a cost of $16 million, which included the purchase of the super structure and the construction of the stadium,” said Burrows Sr, a local baseball executive.

While he has taken into consideration the cost incurred from the stoppage of the work, which is estimated to be around $5-6 million, Burrows Sr said it’s not so much the price of the stadium, but rather the approach the government is taking towards the stadium. “First of all, I don’t think that it’s a disaster. I think it’s a complex that is needed by the Bahamian people and I continue to say that we are on a fast track of pushing our young men into the professional and college realm in baseball,” he said.

“How is it that we could have all these other things and we can’t have something that is needed to develop our kids. Baseball, as it stands right now, is one of the fastest growing sports in the country. Baseball had some slow grow back in the day, but we have turned that around and it is now the preferred sport for young men.”

When he served in the previous Progressive Liberal Party, Burrows Sr said it was their intention to provide a venue that was equal or would surpass the Thomas A Robinson National Stadium so that they can provide the best opportunity for their players to excel.

“The former government was big on sports tourism and this baseball stadium spoke to that. When this (Free National Movement) government could say that ‘we will never pay for it,’ we have to look at these things from a different lens and not be selfish in our approach.”

As the founder of the Freedom Farm Baseball League in Yamacraw, which has given birth to a number of local players who have gone on to excel at college and are now in the pro ranks, Burrows Sr said the Bahamas needs the facilities.

“I’ve heard someone told the Minister (of Works, Desmond Bannister) that the construction of the baseball stadium is turned wrong,” Burrows Sr stated. “Look at any diamond anywhere in the world.

“There is a circle and they have some fields that accompany them. Which one is turned wrong? That doesn’t make sense to me. That and the cost controversy is just confusing the people. We need these facilities in order for us to further develop our players.”

When the stadium was first conceived, Burrows Sr said he was a part of the initial committee that worked along with architect Michael Foster to create the plans.

“When I was in the government as a baseball executive, the onus was on me not to push it,” Burrows said. “So with me being a part of the PLP, I thought it was in my best interest to push the project further to the point where we have a new stadium.”

By putting the project on hold over the last few months since the change in government, Burrows Sr said the construction has been pushed down and that has increased the price drastically.

“The whole stadium, called the super structure, is here. They were shipped from the company called Dant Clayton that we engaged to build it from Louisville, Kentucky as we needed them to place them on the structure. I don’t know what all is left, but they sent out the parts as they were needed. It’s my understanding that all of the stuff is paid for, so as they called for them, they will have them.”

Originally, Burrows Sr said the plans called for the construction of three extra fields that would have been extended from the new baseball stadium to the three softball fields that are occupied by the Bahamas Government Slowpitch League.

“The reason why we fought to have it constructed where it is now is because of many reasons,” Burrows Sr said. “We could then have access to the parking of the stadium if we have any major event. In the masterplan, right across the street where the golf course is, there was supposed to be a small hotel so that it could be used as a games village. The plan was to refurbish the home strip that would include the current softball stadium.”

Burrows Sr, however, said they had also planned to construct a new national softball stadium at the end of the strip of land. In the event of any major competition, Burrows Sr said the baseball and softball stadiums could be transformed to accommodate whichever sport is being played at the time.

“You take a softball field and you put in a portable mound and it becomes a Little League Baseball Field where you can accommodate any size tournament,” Burrows Sr stated. “We would have done the same thing with the baseball field if softball had a huge tournament to be played there.

“The lack of vision is what is bothering me and the information that the minister is receiving is not what he should be getting. It might have cost a little more, but in the long run, we envision that it would have paid off itself because of the use of the facilities that we would have engaged in the use of it.”

Munnings confirmed that the Ministry of Works is overseeing the work on the stadium. However, he said he could not give a figure they have worked out with Woslee Construction, the local company that is in charge of the construction of the stadium.

Munnings did indicate that the stadium is expected to be completed in a 12-14 month period, barring any further delays.