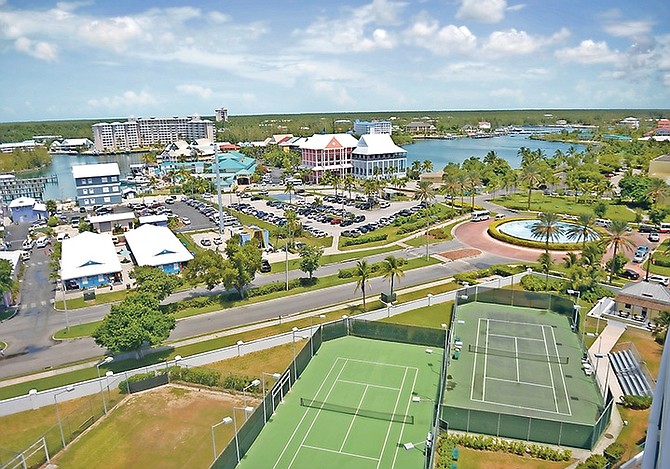 In response to a question from The Tribune, he said while he understands the need to jump start Grand Bahama's economy, he thinks the matter should have been brought to Parliament for a debate before the government forged ahead. Golden Isles MP Vaughn Miller agreed.

Prime Minister Dr Hubert Minnis and members of his Cabinet toured the hotel property on Grand Bahama on August 22, and later announced that the government had made a $10 million deposit to buy the property at a price tag of $65 million.

Many have criticised the Minnis administration's decision to buy the three-hotel property, even though it would provide over 1,000 jobs for unemployed Bahamians.

The resort closed in October 2016 after significant damage following Hurricane Matthew. Only one property, the 196-room Lighthouse Pointe, has since reopened.

The Tribune spoke with Mr Chipman on the sidelines of an event for the opening of the Pineridge Education Centre on Monday.

"I have mixed feelings about the purchase," the Free National Movement MP repeated. "The only thing I can do is encourage and support my colleagues regarding their understanding in what it is they intend to do."

When asked if he thought that the matter should have been brought to Parliament for debate first, Mr Chipman said absolutely.

"It is my opinion, of course, when we start to get into $10 million, $20 million, $60 million dollars worth of purchase, I think at the very least the team should have been, not involved to an extent where they make a decision, but involved to the extent that we understand the project. How it will be funded and the stages of the project, what is the action plan, and, of course, what is the intention with regards to not only jobs, but careers, and opportunities," Mr Chipman said.

For his part, Mr Miller also felt that the matter should have been brought to Parliament first.

"I think it should have been brought to Parliament for debate, absolutely that's for sure. But until I know all of the intricacies and details, and I can not speak to it from an informed position and would not want to comment," Mr Miller said.

"#Many have criticised the Minnis administration's decision to buy the three-hotel property, even though it would provide over 1,000 jobs for unemployed Bahamians"

They're hiring a thousand more people? Or are these the persons already working three days fir the hotel?

Your Bank statements along existing debt servicing radio does say a lot about you as comrade mortgage applicant and credible lenders frown on applicants who have borrow the required down payment..... all cowbell rungin of credit unworthiness sins committed by the borrower (Imperial red government) to enable their purchase The Grand Lucayan Resort... Doubtful how KP can plead ignorance - considering previous occupation listed his 10 May, 2017 candidate's resume.

Government falling all over itself borrowing more Chinese money to do the Port Authorities Job! Seriously, elected idiots need to back away and really look at the G.B. situation, Self inflicted for sure but Governments partner in crime has always been the Port Authority and its principals.