‘Stay Out Of The Water’ 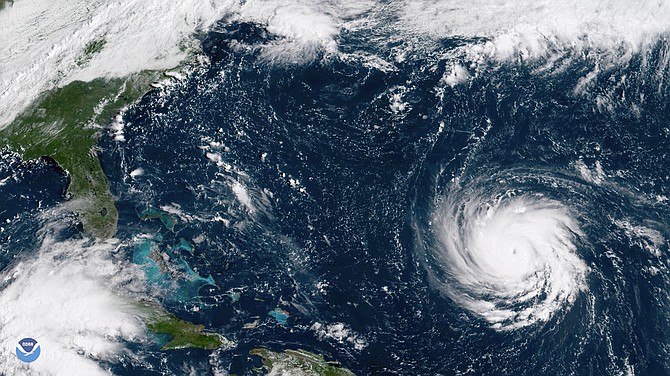 WEATHER experts are continuing to warn residents of The Bahamas about the sea swells Hurricane Florence will generate this week.

AccuWeather meteorologist Dan Kottlowski told The Tribune seas are going to be “extremely rough” and advised boaters in particular to stay out of the water.

Up to press time, Hurricane Florence was a Category Three storm that is expected to develop into a Category Four hurricane today.

The storm is expected to make landfall between North and South Carolina, with Mr Kottlowski predicting that it will cause “devastation” when it does hit land.

Another storm, Hurricane Isaac, however, is expected to hit the Lesser Antilles as a “minimal” Category One storm or “strong tropical storm” on Thursday.

Regarding the Bahamas, the American meteorologist said Hurricane Florence is going to take a track that will keep it east and northeast of the country.

“However, as it continues to intensify, it’s going to create large swells that will propagate into the Bahamas and create much higher than normal surf,” Mr Kottlowski said. “There’s already an increase in surf right now, over the Turks and Caicos and over the southern islands.

“The rest of the islands will see an increase in surf as we head through later today (Monday), tonight, tomorrow (Tuesday). And then very rough surf is expected all the way through until probably the end of the week.

“Anybody thinking about boating anywhere north and east of the Bahamas should not, should not do any boating, should stay out of the water,” Mr Kottlowski warned.

“The seas are going to get extremely rough and so any boating should be discouraged until this thing moves inland and the seas drop off this coming weekend.

“That’s going to be the main issue in the Bahamas, as far as anything from Florence. Then Florence is still expected to make landfall along the Carolina coast somewhere roughly between the northeast coast of South Carolina to maybe the outer banks in that general area right there.”

Mr Kottlowski said the areas that are going to be most vulnerable will be Myrtle Beach and Wilmington, North Carolina — the two areas where the centre of the storm could make landfall.

The storm is expected to be a Category 4 storm at landfall, where it will be a “huge rain producer.”  He said it is expected to produce two to three feet of rain, mostly centred on North Carolina, Virginia, and the northern sections of South Carolina.

“The coastal area is going to get slammed. This is going to cause devastation wherever it does make landfall. No coastal area has ever experienced a Category 4 along the Carolina coast before like this. So this is, again, we are just hoping people take heed and do not underestimate this storm.”

Isaac is now a Category One hurricane. Mr Kottlowski said the storm is heading due west, and the islands it will affect the most are Martinique, Dominica, and “the Saints through Guadeloupe.”

He added islands to the south such as Barbados and St Lucia are expected to experience some wind from the storm.

“But we think the worst conditions will be over generally the northern Windward and the southern Leeward Islands. That will be during the day Thursday. So we expect very rough surf to affect those islands on the east side starting Wednesday.”

Florence is described as potentially the largest and most powerful hurricane to hit the US north of Florida in this century. Even minimal damage will be devastation.

"There is the potential for Florence to stall or significantly reduce its forward speed as it nears the coast, which could prolong the effects of damaging winds, storm surge flooding and beach erosion. A stall or slow forward speed would also greatly enhance inland flooding of streams and rivers.

“There’s never been a storm like Florence. It was located farther north in the Atlantic than any other storm to ever hit the Carolinas, so what we’re forecasting is unprecedented. Also, most storms coming into the Carolinas tend to move northward, and this storm looks like it’s going to stall over the region and potentially bring tremendous, life-threatening flooding,” AccuWeather Vice President of Forecasting and Graphics Operations Marshall Moss said.

States of emergency have been declared in North Carolina, South Carolina and Virginia in preparation for Florence's arrival."

Get the free AccuWeather app to stay up-to-date with Florence’s expected track and impacts to the U.S.

Atlanta's highways are backed up with people coming here to get out of danger. All of the coast from the Carolina's up through Virginia is under mandatory evacuations. They turned all of the highways into going West only so people can get out. Atlanta is at this point is a little south of the areas impacted. They're forecasting this to be a major storm. The worst in decades.