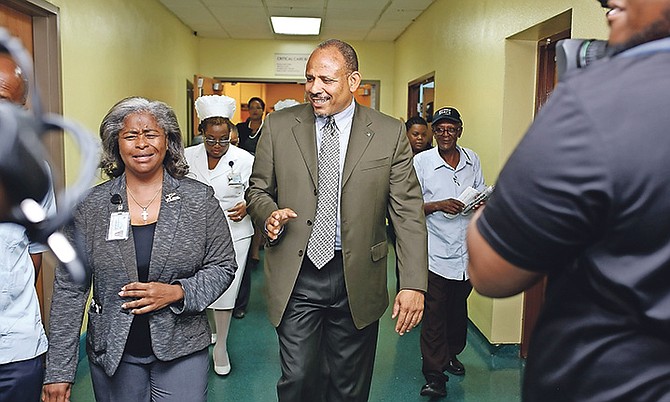 AS Princess Margaret Hospital grapples with an ongoing "crisis" in its dialysis unit, PMH administrator Mary Lightbourne-Walker has been placed on administrative leave after the hospital faced fierce backlash over a leaked internal memo proposing a new fee structure for patients of the unit who use wheelchair transport.

Health Minister Dr Duane Sands confirmed Ms Lightbourne-Walker's leave, but would not reveal yesterday what prompted it. He would only tell reporters she was put on leave for two weeks. It began on August 31, The Tribune understands.

However, inside sources told this newspaper yesterday the administrative leave was a form of disciplinary action after the memo was released to hospital staff and patients in the absence of consultation with the Public Hospital's Authority and the government. The memo was also circulated on social media.

Asked whether this had happened because of an internal investigation, Dr Sands said: "Every staff member is due due process and so if you are on administrative leave there is obviously a process that is followed so that we adhere to the human resources policies and procedures. I think that is about as much as I'd like to say about that."

Earlier in the interview, he was asked if there was a situation with upper management at the hospital, to which he replied: "Well, we are always trying to identify the right team for the management of the hospital.

"I don't want to conflate issues. At the end of the day what we are trying to do is ensure that the right persons are in place at the right time in order to provide services to the Bahamian people."

In the midst of this administrative issue, patient dialysis times have been reduced.

This is because, as Dr Sands put it, there are not sufficient dialysis nurses to cater to the nearly 200 people who need renal therapy.

Asked if it was a crisis situation, Dr Sands said it was.

"Dialysis has been a huge challenge for more than 10 years," he explained. "We have a dialysis unit at Princess Margaret Hospital that was designed for 125 patients.

"The public dialysis service provides renal replacement therapy to almost 600 patients and so some of those patients are managed in Grand Bahama and some are managed in Abaco, many are managed at Princess Margaret Hospital -- almost 200 - and then some are outsourced to Renal House to other private dialysis units in New Providence.

"But we continue to have challenges because we don't have enough nurses because the equipment requires upgrades and all of these now we are trying to address to determine what is the appropriate way forward."

"The typical is three to four hours and so these are real problems. We don't have the dialysis nurses to provide the level of care that we would like to provide and yet we are mandated to soldier on."

Late last month, PHA said it did not implement a new fee structure for wheelchair transport services for dialysis patients after concerns were raised about an internal memo that was made public proposing such a move.

A weekly charge rate of $150 for transport to and from the dialysis unit three times a week was outlined in the memo by Ms Lightbourne-Walker, who noted the proposal for the new charges was reviewed and supported by PMH's executive management team.

In a statement at the time, PHA confirmed it had not executed the new fee structure.

"Presently," the PHA statement read, "transport services are being provided via private services at prices determined by the private contractor. Additionally, the dialysis treatment fee per session has not increased from its gazetted fee of $275.

"The Public Hospitals Authority apologises for any inconvenience caused as a result of the circulation of this information and assures the public that the authority remains committed to its mandate of delivering the best in quality healthcare."

The PHA would not confirm the name of the private company nor the cost of the service.

At what point are we going to admit that this COUNTRY is in crisis and in need of serious help? I do not know where this help will come from but the current and former administrations are out of their league and the politicians and government agencies are so steeped in corruption and inefficiency that the only way they know to move is with a hand out or in the cookie jar.

I don't think we've seen anything yet. Watch Dr Minnis, he lets everything disintegrate into chaos and then he moves in as if he's saving the world. Watch him. Trump 2.0. Create a crisis to solve

Comrade DDK, I said it months now since 10 May 2017 and say again, we last hope is Her Excellency Marguerite... someone Minnis, KP and Carl Wilshire, want Her Excellency's pledge natives - remain of Independence of mind - royally gone much sooner than later,

Can we put the health minister on administrative leave?

Sands is at it again. The lady walking besides him seems to be crying.

Sands will do well to remember." You can do as much as you like , but not as long as you like." There is a just God and his justice will prevail.

I trust this in not another Banister verses Ms. Osbourne show of power,

They say "Its the peoples Time:"

I don't think they say it that much any more!

Ma Comrades, ( And, I hope Her Excellency Marguerite, does also read my post as she weaponizes gathers sufficient evidence firing entire Imperial red government ).... lets all flashback June 15, 2017 when none other than a certain heart surgeon had this say when he stood floor Peoples Honourable House of Assembly to deliver river criticism against way former PLP government, granted contracts. { Not making this up, okay }.

During the budget debate in the House of Assembly, Dr Duane said despite owing millions of dollars in salaries and commitments, weeks before the general election the former Progressive Liberal Party (PLP) government entered into $9,756,006.64 worth of security contracts, "janitorial contracts", generator purchases and other miscellaneous items “to people who may be considered the PLP party faithful.”

Parents should be required to put on deposit with NIB $500 at the time of each of their children's birth. If NIB added just 4% interest, by the time the child is 50 and may need dialysis, this would have ballooned into $3,553.34 A hundred patients would therefore yield over 350 thousand dollars which could help greatly with machine maintenance and duty nurses.

Unfortunately, this was not thought of 50 years ago and people were just told by the church to "be fruitful and multiply."

Nowadays, the prices of those fruits are being struck up on the cash register. What will be the prices in another 50 years as a result of the current epidemic of belly-swell-itis?

It's a sad story. I wish it wasn't true.

And if I refuse to pay the money, what's the recourse? You take away my child? I go to jail and leave a child without a parent...because I cant afford $500? Respectfully, MadHatter, the idea makes no sense.

It might make more sense than people dying from lack of medical care.

Further proof that we need a National Health Insurance plan to fund the $1Billion healthcare needs of Bahamians and Bahamian Residents.

A sign that we have reached political maturity would be when the two major political parties come together to address this and other extremely important national issues. Some things need bipartisan support and action.

You will never see two political parties come together with the tribal mentality we have in this country!

In spite of having been 'in the system' for decades, Sands has brought no order or structure to the chaos that exists in the public healthcare system in a way that benefits the Bahamian people. I can only hope that his apparent conflict of interest in awarding that $1.8 million contract results in his dismissal!

What I find interesting is most of you posting seem to think our slide to the bottom as a nation started in the last two years .Dam we have not been able to keep the power on despite charging an arm and a leg for electricity since the late 1970 . The looting of the treasury w loans to cronies and friends also started way back then w the Peoples penny saving bank ,then The Development bank and finally w BOB .Then we cry its the crooked politicians , if your PLP its the FNM if your FNM its the PLP .Well these politicians did not come from Mars they are Bahamian born of Bahamian mothers and fathers . In the beginning after independence we could claim ,we getting back what the Bay Street boys took .The Bay Street boys still alright and we robbing our selves .I f we did not have a much larger tax base then our population we would of collapsed long ago .Because we have duty and now vat that our consumption taxes every time a tourist eats ,drinks or buys something they are also paying taxes here

I believe the majority of us understand that half a century of corruption, greed, nepotism and outright stupidity has led our country to the sorry state it is in.

"tetelestai says... And if I refuse to pay the money, what's the recourse? You take away my child? I go to jail..."

NO. You keep your child. You dont go to jail. No penalties at all, except you don't get a birth certificate, therefore no passport, therefore no travel abroad.

That's all. Many children will end up paying their own $500+interest when they turn 18 and want to travel or go away to school.

No money? No birth certificate. That's all. You can even still get kidney dialysis on the backs of your hardworking, tax paying, fellow Bahamians.