Officers 'Closing In' On Murder Suspect 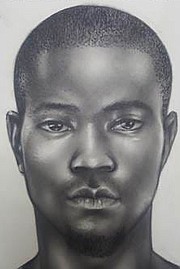 A sketch of a suspect being sought by police.

"I will have some good news for the Bahamian people shortly," he said.

ACP Fernander said two people are in custody assisting police with their investigation, though they are not suspects in the shooting. The conditions of their detainment are unclear. ACP Fernander couldn't say if they were cooperating with police.

Insp Blatch was said to be sitting in his vehicle on Wednesday, with his 13-year-old daughter, waiting for his son who attends HO Nash Junior High when a gunman approached him and pointed a gun in his direction.

Insp Blatch was immediately remembered for his professionalism. He worked at Government House for 14 years.

Yesterday, Our News spoke to Insp Blatch's brother, Marcus Blatch, who revealed that he spoke to his older brother about half-an-hour before the shooting.

"I called him yesterday (Wednesday) and soon as I called him he said 'I just was about to call you,'" he said. "He said he is there consumed with work, trying to knock it out and I said bye and we'll talk later. Half-an-hour later I got a call that he was shot. I tried calling his phone, just got voicemail."

He said his brother "was a family man".