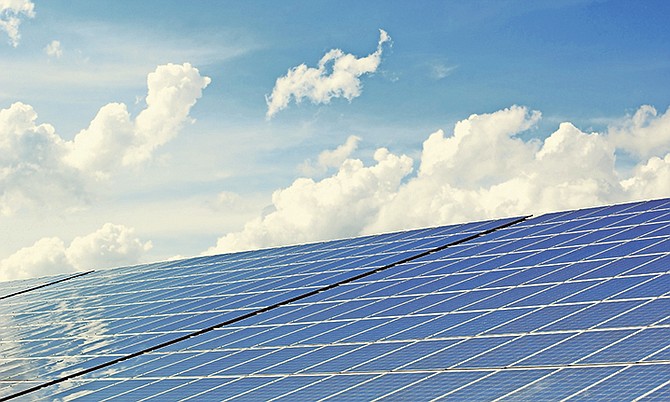 AS countries around the world wean themselves off fossil fuels, one increasingly popular alternative catches the eye: floating solar panels.

Fastened in place on top of the water by a network of plastic rafts, the innovative system functions just like land-based solar systems, but with water as its base.

In the past decade, as the price of solar panels has declined, the system has been popping up in Asia, Australia, Europe, South America, North America and Africa––everywhere but the Caribbean.

The reason is simple: land is a scare resource. Solar panels are restricted in their ability to convert sunlight into electricity so many of them are needed and countries find it challenging locating enough land to create utility-scale solar farms.

PowerSecure, Bahamas Power & Light’s former manager, ruled out constructing a $140m solar farm on New Providence, not least, it said, because of difficulty finding 155 acres of land on which to build the farm.

Last year, Works Minister Desmond Bannister told The Tribune: “One of the issues with solar in New Providence is that it simply takes up large areas of land.”

Facing similar problems, countries around the world have found their solution in the water.

Australia opened a 100kW floating solar plant this year and plans to increase its size five-fold.

The Godley Reservoir in Greater Manchester, United Kingdom, has 12,000 panels, generating 2.76Wh of energy per year to power a local water treatment plant.

Floating solar panels don’t just solve land scarcity problems. Experts say they are naturally cooled by wind and water as well. And in the absence of trees and dust, they require minimal maintenance.

One floating solar plant in South Korea has a production efficiency that is 22 percent higher than a comparable ground-mounted plant. Why? Because it is easier to rotate and has unobstructed exposure to sunlight.

As everyone knows, if there are two resources the Bahamas is in plentiful supply of, they are sun and water.

Could floating solar panels solve this country’s energy woes? Perhaps it could––but probably not in the near future. Almost all of the world’s floating solar farms are located inshore in lakes and reservoirs. Floating solar panels on the open sea––the only feasible option in the Bahamas––poses unique threats, experts say, because of changing water levels, stronger winds, wave action, corrosive salt water and the possible growth of marine organisms like barnacles on floats.

It is also unclear what effect floating solar systems could have on marine ecosystems, an important issue for a country whose sea is among its most treasured resources.

These problem, however, have not looked insurmountable to a Dutch company which recently unveiled a $1.5m project to create the world’s first floating energy platform at sea.

The Netherlands, which is one of the few countries to push sustainable solutions, will host the farm in its coastal waters.

A nine-member consortium, headed up by Oceans of Energy, a Netherlands company that creates floating offshore systems for clean energy generation, will develop the system.

It will be backed by government funding via the Ministry of Economic Affairs and Climate Policy’s Netherlands Enterprise Agency over the next three years.

Allaard van Hoeken, founder and CEO of Oceans of Energy, said solar farms were prevalent in lakes and inshore water bodies, but none had been sourced at sea due to wave and wind concerns.

He added the project should be a success as it was being built on the competencies of the consortia project partners and on the expertise of the Dutch offshore industry.

Utrecht University will conduct sustainability research, while the Maritime Research Institute of the Netherlands will carry out independent research for the Dutch government.

Utrecht University solar power expert Wilfried van Sark said the impact of wave energy on the solar panels would be one of the many issues to be analysed.

Mr Van Hoeken said the project would help create “a lasting impact worldwide” as the majority of the global population lives close to coastal regions.

In addition to the Dutch, Singapore’s Housing and Development Board (HBD) signed on to a research project this year with a landscaping firm to study the development of a floating solar system for coastal marine conditions. The study will examine whether the system can withstand the harsh environmental conditions of the sea, according to Singapore news reports.

A similar study began six years ago in the sunny archipelago of Malta, a country whose population and Gross Domestic Product mirrors that of the Bahamas.

That $260,000 project, spearheaded by the Malta Council for Science and Technology research and innovation, is nearing its final stages.

If Malta can do it, what is stopping the Bahamas from positioning itself at the forefront of research into open sea floating solar panels?

The country has little to lose: According to the Inter-American Development Bank, the Bahamas is the worst in the Caribbean for renewable energy penetration.

The Bahamas’ National Energy Policy, released in 2014, called for the Bahamas to produce 30 percent of its energy from sustainable sources by 2030. But speaking to Tribune Business last month, Phillip Holdom, president of Alternative Power Supply, said the country is “nowhere close” to achieving that rate.

The country’s energy policy revolves around the development of liquefied natural gas, a “clean” fossil fuel that emits 50 percent less carbon dioxide than coal when burnt but still attracts the ire of environmentalists. In April, Sam Duncombe, the president of reEarth, called the adoption of LNG as the country’s main power source a “huge regressive step,” questioning why the government has not pursued solar energy instead.

“ReEarth spent six years fighting the AES pipeline that would have taken natural gas from a re-gasification facility on Ocean Cay to Florida, so that we wouldn’t become basically Florida’s gas station,” she said. “All of the safety concerns are still there.You are now talking about putting an LNG plant right next to Mount Pleasant, Adelaide, Albany and Lyford Cay. All of those communities are in potential danger. We have so many issues to deal with in this country that to go back and rehash stuff we have already dealt with is so backward and so discouraging.”

Government has no $$ to throw at Alternate energy, or updating BEC/BPL . The only sector with the $$ is the Private sector, but Government cannot let go of certain things, therefore drags their feet and utilizes every excuse thrown at it by interests vested in the status quo.The "Yes you can/no you can't, yes you can again" flip flopping doesn't instill confidence that investing in solar is safe or investment worthy. As to space, yes, perhaps there is a challenge in finding space for large utility scale installations (personally I doubt this) but private roof tops and yard space abound. If a liberal grid tied policy was enacted, specifically one that prevents BEC/BPL/Emera from resisting via technical feet dragging, the Bahamas could easily overshoot the goals and timelines set (politically) in short order. Being a member nation of the Carbon war room and the 100 Island Challenge (perfect candidate: Ragged Island) seems to be an empty promise. So we continue to bleed a billion a year of U.S. currency on fuel oil imports.

Sounds like just another scheme by the IDB to lend us more money to keep us as indentured servants paying interest on debt and eating corned beef.

Oracle is right. If such things truly were meant to benefit the people then grid tie-ins and solar energy itself would be made legal.

Currently solar panels remain illegal in this country. They are just allowed for some politically connected persons and no arrests are made. But anytime someone actually tries to do anything significant with them - they get a visit from the authorities.

Legalize solar or shut the hell up with this IDB nonsense before VAT has to go to 50%.

I find it amazing when the borrower blames the lender that we went to hat in hat "begging money " We do well as a country ,but b/c of massive corruption ,dam 600 million walked out the front door of BOB ,lack of maintenance ,a massive vote buying exercise by both PLP and FNM ,ie 1 in 4 working for government,,, we have to keep borrowing and taxing and we have been for the last 30 to 40 years .

The floating grid tie method could be successfully built using less than one quarter of the space on lake killarney. This would eliminate the need for any land space. Plug holes in power secure argument that New providence does not have enough land space and avoid the problems of high tides and bad weather. This method is said to be more efficient than land SPV systems because the lake water can be used for cooling. A private public partnership PPP can be used to finance this project. The vested interest in fosiil fuel supplies to this country and the politically connected both fnm and plp will not seek to do what they know is trght and push to go SPV route and we can all guess the reasons why. A large scale floating solar panel system on lake Killarney could easily generate all the power needed for BPL . these types of systems are already in use and being proven around the world.

Nothing will change over here. The world will move on to whatever comes after solar and we will still be talking about this amazing thing called solar, whilst experiencing power cuts with BPL. There is no political will to do the changes necessary as they are either scared of what the outcome of these changes will be or they can't see how to monetise these changes for themselves. Watch whoever is in charge of BPL after the next election will talk a good talk about solar power and yet in reality nothing will happen.