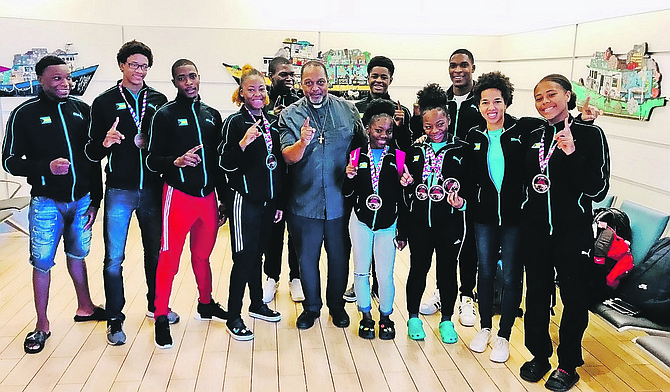 TEAM Bahamas members on their arrival at the airport this weekend after their “best team” performance in the annual Ocean State Judo Championships in Providence, Rhode Island.

The Ocean State is one of the USA's best tournaments on their local circuit. It brings together competitors from the entire New England area as well as international competitors from Europe.

"The competition here is tough, and while everyone on the team didn't win medals, nearly all of them took matches and were competing for medals. We have some things to work on, but we are right where we need to be to have success at the Jr World Championships."

In judo, because there are two third places, the losers of the bronze medal matches are awarded 5th place.

"It is time to support this team," says D'Arcy Rahming Jr, High Performance director of the national team. "The championships are upon us and the athletes have trained hard and the results are showing.

"But they need the support to carry them over the edge," he added.

"We have never had a team this good and this well-prepared."

The World Juniors is scheduled to be held in Nassau October 17-21.

Over 70 countries from five continents and 650 athletes, coaches and delegates have confirmed attendance, making it the largest sport tournament ever held in the Bahamas in terms of numbers and diversity of countries.

Jasmine Russell (u-44kg) - Lost one match by a counter throw, but came back and won her next division, dominating everyone she faced, winning each match by ippon (knockout).

Larry Marshall (u-100kg) - Defeated two formidable blackbelts, including Will Cherry, who represents Haiti, and Benjamin Lind who represents the USA. His only loss came against Stoichko Tarpanliyski, formally from Bulgaria. Larry threw Tarpanliyski twice for no score, but was ultimately beaten by the more experienced opponent.

Desmondo Bootle (u-81kg) - had the best groundwork of the tournament, choking his opponent to submission. To support your national team, please contact us at 431-0242.