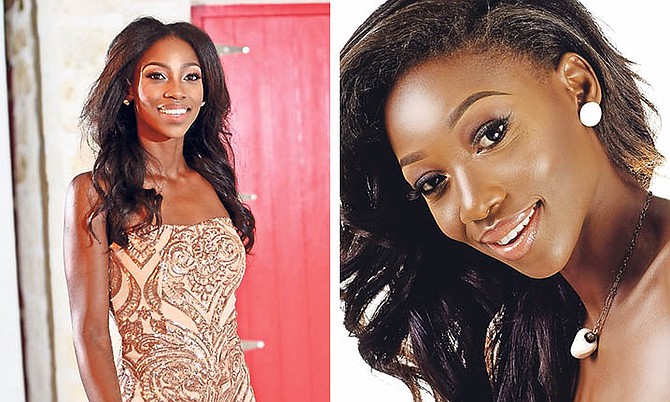 SHE may not have been crowned the queen of this year’s Miss Bahamas Universe pageant, but Shauntae Miller left the competition as the first runner-up and more confidence that she has ever had.

Now, the 25-year-old is gearing up to promote fitness throughout the islands, represent the Seahorse Institute as a brand ambassador, and earn her Master’s degree in Clinical Counselling and Mental Health.

Shauntae is the older sister of Olympic champion Shaunae Miller-Uibo. The gold medalist supported Shauntae every step of the way during the pageant, while she herself needed support as she defended her 200 metre title during the 2018 IAAF Diamond League final in Belgium last month.

Shauntae said she relied heavily on this support and encouragement from her sister and other family members to see her journey through to the end.

“My sister and I are literally best friends. Not a day goes by that we don’t hear from one another, and if we call too late it’s an argument,” she said.

As the oldest girl of four children, who have all competed on a local and international stage representing the Bahamas, Shauntae has always played the role of cheerleader – serving as her siblings’ motivational coach, encouraging them with scriptures and reminding them that ‘It’s Miller time!’ – “our little joke”.

“But Shaunae, I can definitely say is a courageous young lady that goes after what it is that she wants. Her mind is already made up, so the only thing left to do is say a prayer and quote ‘242’, as she is not only representing herself and her family, but a nation of strong and mighty people. She encouraged me throughout the pageant on a daily basis by telling me how super proud she was of me, reminding me to always keep God first and know that I am truly a queen. My family is used to supporting us all the time. They always fully support in school and track, therefore adding pageantry into the mix was a piece of cake to them,” she said.

Shauntae’s family were all seated in audience at the Atlantis Theatre on the night of the pageant finale on September 16 to remind her that win, lose or draw, she is still a queen.

And now as the pageant’s first runner-up, Shauntae’s role and responsibilities are to assist the organisation in whatever area they need; a role she is excited to take on.

“Right now the queen (Danielle Grant) should be extremely busy preparing for Thailand and the general public has many questions about the pageant and our experiences that I am more than willing to answer,” she said.

Additionally, Shauntae is the new brand ambassador for the Seahorse Institute, which offers intervention and support programmes for children, teens and adults with autism spectrum disorders and developmental delays.

“Everyone that knows Shauntae, knows that I love the kids and the kiddies love me,” she told Tribune Woman.

While she takes on those responsibilities she will also be coaching kids who are members of the Bahamas Speed Dynamics track club, promote her platform and conclude her Master’s degree in Clinical Counselling and Mental Health at Carson University in Knoxville, Tennessee.

“Before I decided to do a pageant I was a shy, timid, young lady that was only concerned about her space in the world. It was just all about coaching my kiddies, philanthropy, school and training for track. I’ve always heard about young ladies joining the pageant and they would always say, ‘I will never be the same’. Off course I rolled my eyes and said ‘yeah, it’s all a show’. Until I joined and recognised that pageantry will literally change your life. Shauntae today is still a shy, empathetic young lady, but also a young lady that’s ready to take on the world. I’m now ready to bring awareness to local and global issues that I’m passionate about. What I took away from the pageant experience is to always be yourself, confidence is key, and growth will definitely happen. Now I know that all of the world is my space and I will act accordingly,” she said.

Even though the pageant has concluded, Shauntae said she will still promote her platform, “Get Fit Bahamas”, which is geared towards helping Bahamians have a healthy lifestyle through educating them on the importance of physical activity and better eating.

“The Bahamas is ranked the most obese country in the Caribbean and we are highly ranked in the world. We also have Bahamians that are dying and suffering from non-communicable diseases, otherwise known as chronic illnesses, such as diabetes, cancer, hypertension and heart disease. These are all illnesses that can be prevented with a healthier lifestyle,” she said.

“So as promised in the beginning, although placing first runner-up, I will continue to promote ‘Get Fit Bahamas’ throughout the nation. As this is more than a platform to me; it’s my lifestyle – keep an eye out for my Get Fit Bahamas Fitness Party. Most importantly, I will do anything for my Bahamian people. I’m a proud Bahamian who loves her people and just want the best for all Bahamians – ‘One people, united in love and service’.”