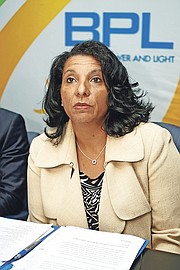 BPL would not confirm any details surrounding her seemingly abrupt decision to leave the company less than two years after taking the position, but an email obtained by The Tribune confirmed CEO Whitney Heastie made the announcement on Saturday.

“This is to confirm that we have received notice of COO Christina Alston’s resignation effective immediately. Until further advised, direct reports of Mrs Alston will continue to report as they have been during her most recent vacation,” the email read.

It came after she tendered her resignation on Friday.

BPL’s Director of Communications Quincy Parker would only confirm the resignation but declined further comment.

However, Minister of Works Desmond Bannister said he didn’t see anything to be concerned about.

Mrs Alston, a Bahamian and certified energy manager, officially took up the post in November 2017 after serving as director of supply chain services at Georgia Transmission Corporation.

Sources familiar with the situation told The Tribune her decision to leave had been brewing for quite some time, adding there were disagreements over certain issues at the electricity provider.

It was sparked by the manner in which executives of BPL were “unprofessionally” operating its affairs, The Tribune was told.

Namely, it is said she took exception to the selection of Finnish Technology group Wärtsilä to build BPL’s new $95m electricity plant.

“Christina is a consummate professional,” one source told The Tribune. “She just could live with the host of irregularities present at BPL.

“They were operating unprofessionally and her background would not allow it.

“She had issues with the level of people that took voluntary separation packages leaving BPL without the needed expertise. Overall BPL is a far cry from the places she’s worked.”

Ahead of officially taking the post in 2017, Mrs Altson said she was excited to be able to return home to utilise her expertise and skill set to aid the company.

“This is a fantastic opportunity for me. I am proud and a Bahamian and so excited to have this opportunity. I have spent so many years wanting to come home and really address so many of the problems I understood the Bahamas was facing,” said Mrs Altson at the time.

Christina had impeccable credentials, a superb background, an exemplary work ethic and a strong sense of right from wrong. She's the epitome of all that is good and is everything that Whitney Heastie and Desmond Bannister are not and shall never be.

Something is not right at BEC.

Don't forget the senior executive purported to have ordered an engineer to restart an engine causing it to burn up thus leading to weeks of power outages....is still there....making decisions....like wartsila

I am not surprised at all about this.I asked somebody last year where is Christina?There were some decisions being made at BPL without her input.The lady is a highly qualified professional. There are bahamian professionals living and working aboard who don't have the time for the foolishness that goes on in this country.

Where is Christina?? Where is Minnis! This is the 2nd highly qualified female executive that he has allowed to be cast to the wayside and his only job was to "oversee everything". Thats what he said, he wasnt taking in a portfolio because he wanted his role to be oversight.

More troubling, in both cases the issues appear to stem from allegations of impropriety in processes surrounding the awarding of contracts. You would think after Mrs Osbourne raised the first alarm about a 4 million jump in a contract with no reasonable explanation, Dr Minnis "the CEO" who told her ~"don't do anything, I'll take care of it", would have been watching out more intently for the people's money. If any of these men follow Fred Ramsey Minnis can't claim ignorance.