The Peter Young Column: Mother Of Parliaments? Rather The Mother Of All Messes 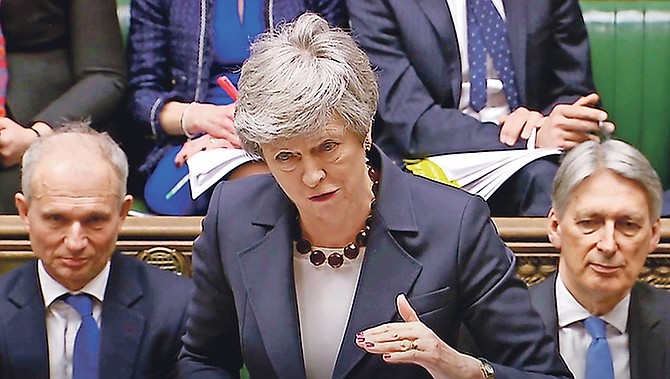 Since Britain’s departure from the European Union is causing political upheaval in a nation divided on the issue, it remains top of the news agenda. So, reluctantly, I am covering Brexit in this column for a third week running. This time, while mentioning the latest developments splashed daily across the British and European media, a brief look at the background that has led to the impasse might be interesting.

Prime Minister Theresa May’s Withdrawal Agreement with the EU has been blocked by the Westminster Parliament for a third time. So far, however, it has been unable to agree alternative terms for an exit. The UK is, therefore, on course to leave on 12 April with or without a deal, but there could instead be another extension of the departure date which would require participation in the European Parliament elections in late May.

There will be further discussion in the House of Commons this week about alternatives, but eight non-binding ‘indicative votes’ have already failed and Leavers now fear Parliament will find a way of keeping Britain in a customs union or of stopping Brexit altogether. Clearly, a so-called soft Brexit of staying in a customs union is not what leavers voted for because it would prevent the UK from negotiating bilateral trade deals with others and would keep its regulatory regime aligned to the EU while having no say over setting tariffs.

Meanwhile, Mrs May could insist on another vote on her deal this week since she is convinced it is the best means of ensuring an orderly withdrawal, and, if it is passed, she has agreed to stand down as prime minister.

As a result, the knives are out among deeply divided Tories and the polls show Labour in the lead so that in the event of a snap election the hard-left opposition leader, Jeremy Corbyn could become prime minister. Unsurprisingly, having passed the original date of 29 March that it was due to leave the EU, people wonder how a mature country like Britain, with its long history of democracy, tolerance and fair-mindedness and its famous ‘mother of parliaments’ as the cradle of that democracy, could end up in such a mess.

It seems a mixture of EU intransigence and a flawed negotiating strategy by the UK government have caused the current impasse, with the EU being uncooperative because it does not want Brexit to happen lest other member states follow suit. To some observers, the idea of an agreed deal on procedure, termed a divorce bill that has become Mrs May’s Withdrawal Agreement as a precursor to a post-Brexit negotiation of new trading arrangements, was the wrong approach. Instead, Britain could have committed to meeting existing financial obligations and to treating EU nationals in the UK properly while insisting on leaving formally on 29 March - after which, during an agreed implementation period, the details of all that could have been agreed together with negotiation of a trade agreement to include a solution to the Irish border problem.

To Remainers, it would be a foolhardy act of collective economic madness to leave voluntarily a single market of some 450 million that takes more than 40 percent of British exports and, at the same time, a customs union which ensures tariff-free access to that market.

In the lead-up to Britain’s membership of the European Economic Community, known as the Common Market, in 1973 it was labelled the sick man of Europe because of the dire state of the country’s economy. Remainers say its subsequent recovery was attributable to membership of the EEC and, later, the EU.

By contrast, Leavers maintain the issue is one of sovereignty and control of the nation’s affairs: in the oft-repeated words of the prime minister, taking back control of its borders, its laws and its money, as well as management of its agriculture and fisheries and ending the jurisdiction of the European Court of Justice. In particular, control of immigration from the EU by leaving the single market, which requires free movement, was a significant factor in the referendum.

Furthermore, they contend the EU is moving inexorably towards political union and a federal super state that, reportedly, would lead to absorption of sovereign nations in to designated regions of a new country called Europe. The sovereignty issue can be controversial since nations already concede a degree of autonomy through international treaties and conventions that impose obligations on signatory states. But the EU has created what amounts to a new legal order within the jurisdictions of its member states that ensures the supremacy of EU law over domestic statutes through directives drawn up in Brussels.

Concerns about loss of sovereignty were expressed when Britain joined the EEC, but these were brushed aside as being less important than the advantages of trading on beneficial terms with its nearest neighbours in Europe. Now, commentators regard the ambition of an EU elite to bring about bureaucratic centralisation and ever-closer political union is a mistake because it disregards the current political mood and the strength of ‘euroscepticism’ in member states which are unlikely to accept any single power structure. Certainly, there has never been much doubt that membership of a full federal Europe is not compatible with British sovereignty.

In the view of one well-known contemporary English historian, Westminster MPs are now out of touch with ordinary voters over Brexit and are disregarding the will of the people. They are ignoring them to such an extent that there is a real threat of the nation’s tried and tested long-standing democracy unravelling before people’s eyes.

Events surrounding Brexit are developing almost by the hour, but this is how the situation looked at press time yesterday.

A moment of pride

To many, the Falklands conflict involving Britain and Argentina is long forgotten, but it was an important historical event that dominated the world’s news at the time. Today marks the anniversary of this short-lived military conflict. On 2 April 1982, Argentina invaded the Falkland Islands, a remote British colony with a population of less than 3,000 which had been ruled by the UK for 150 years.

The British government reacted furiously to this attack on its sovereign territory, not only in response to the islanders’ fierce opposition to any Argentine interference in their lives but also because bilateral talks with Argentina about the future of the Falklands were taking place at the time. A naval task force was quickly sent and British forces landed on the islands on 21 May.

After some fierce fighting, the capital, Stanley, was liberated when the Argentines surrendered on 14 June. The official statistics make grim reading. In the course of a conflict lasting 74 days, six British ships were sunk, 255 British and 649 Argentine military personnel were killed and three Falkland Islanders also died during the hostilities. Despite Argentina’s claim to what it calls the Malvinas, the British government was clear about the status of the Falklands as a colonial territory. It recognised the obligation to protect the islanders. It also acted under the principle of respect for self-determination contained in the UN Charter.

As a young(ish) desk officer in the Foreign and Commonwealth Office working on the reconstruction of the Falklands, I made a familiarisation visit there in 1986. Despite the horrors of the conflict, I had to admit to a certain pride in knowing my own country was prepared to protect such small numbers of islanders against Argentine aggression despite the high cost of so many lives lost.

Time to hit the road JACK! The 12th can't come soon enough. Should have exited on 29th March. Enough is enough!