Face To Face: Kevin Bares His Soul In Language Which Helps Us All To See 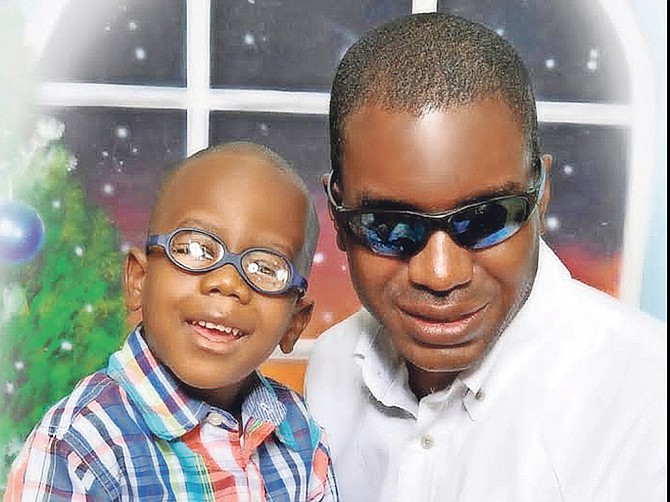 Kevin Cartwright with his son Kylan.

GIVE ME YOUR EYES TO SEE

I’ve seen the beauty of the world before,

But never through your eyes.

God gave me the gift of sight that stayed for just a moment,

Even though my world had changed,

And for a time things were strange,

My childhood innocence remained an inner source of peace.

Blindness stole my sight in the dead of the night!

What a cold and callous thief!

Until you came along.

You awoke a dormant part of my heart that was frozen by a lonely winter’s song.

Until you passed my way,

Not to mention white doves and pink flamingoes,

All of which God spoke into existence in one day.

Whenever I’m with you,

Although I cannot behold the way you look at me.

It’s so hard to resist not feeling your amorous stare.

Paint for me a mental image of your face;

Give me vivid descriptions of your sensuous beauty—

Your skin, so soft, so fair.

Be my eyes, my SWEET LOVER,

So I can see you,

The one whom I love dear.

The poem above is one in a series about to be released in a newly-published book Revelations of a Silent Heart by author Kevin Cartwright. I have had a sneak peek at the book and I find the poems so heartfelt, so sincere and very touching. This is his literary debut, which he describes as “a brave compilation of various moods of poetry and prose that speak about life, love, risks and the courage to face head on whatever life throws at him”.

As he prepares to release his book this month, a statement on Revelations of a Silent Heart reads: “Kevin bares his soul, allowing readers to meander through its corridors and into the hallowed chambers of his heart and mind. Once there, readers are invited to linger for just a moment before plunging into the depth of human emotions, such as love, joy, sadness, surprise and contempt. It is a provocative and stimulating read. No doubt, it is an honest, daring and profoundly personal volume that is well worth reading.”

Kevin has not allowed his disability (blindness) or disappointments to define him. Instead, like the proverbial phoenix rising from the ashes, he embraced all the good and not-so-good things that life has dealt him, and he has allowed them to become stepping stones to a fuller, richer existence. There are 75 poems laid out in the book, which is divided into three sections – Honey-sweet Passions of Love; Bitter-sweet potions of heartbreak; and Refreshing Cocktails of Love, Hope and Encouragement.

“The writer has a unique writing style, which allowed him to transfer his thoughts into readable poems where one can gain comfort,” says Maria Augusta Deleveaux, former Principal of the Erin H Gilmore School for the Blind who wrote the foreword of the book.

“Throughout the book,” she says, “There are clear evidences of Mr Kevin E Cartwright’s gifts as an English language scholar and teacher.

“As the young and old alike search for love, they should read this volume of poems, which will be beneficial to their selective choice of a mate. I am pleased that this book of love poems gives life, enthusiasm and determination to those who read it, while telling the stories of each as you perceive it.”

Kevin has served as a teacher at Erin H Gilmore for nearly ten years now, where he teaches the Language Arts curriculum, Braille and Assistive Technologies. He returned home to serve children who faced the same plight as himself after graduating from West Virginia State University with a Bachelor’s degree in English Language, minoring in Literature and an Associate’s degree in General Education. While in college, Kevin had a guide dog named Quella, a yellow Labrador retriever who assisted him with his functional independence during travel. He received her from a training school called The Seeing Eye in Morris Town, New Jersey. Kevin says Quella made his life so much easier. The Persons with Disabilities Act was not passed yet and Kevin says he found some resistance to service animals. Today, with the Act on the books, Kevin believes the time is right for more service animals to assist those with disabilities in The Bahamas.

Quella came home with Kevin during university breaks but he was not able to bring her home upon graduation: “Because of the climate in the country at the time, I retired her and a professor of mine assisted me with finding a family in the US; and they took her and kept her as a pet because I couldn’t bring her home and utilise her the way I wanted.”

Forty-two year-old Kevin was born with glaucoma and although there were several successful surgeries performed on him at birth, he lost his eyesight completely at the age of eight. He said that at the time, technology had not advanced in medicine to the point where it is today, and children in his situation now have a better chance for sight preservation as there is “so much more that can be done”.

He is optimistic about the chances for his own son, seven-year-old Kylan. He was born with bilateral cataracts (meaning it affects both eyes) as well as strabismus (cross eye) and he underwent cataract removal surgery at Bascom Palmer Eye Institute in Florida when he was nine-months-old. Kylan has to do routine follow-ups three times per year. He is visually impaired but he can see, due to the constant medical care his parents do their best to ensure he receives. He attends Erin H Gilmore where his father teaches.

People are usually in amazement when they see Kylan with his father, Kevin and mother, Tonia Gibson. Both his parents are blind, and so he has become their eyes, helping them when shopping and for other occasions, making life a bit easier for his parents.

“He is an intelligent, helpful, active, caring, loving and sensitive child,” said Kevin. “He is also a typical normal child who loves to play. We give him that freedom to be a child. Not because he provides us with visual assistance do we limit him from being a child and enjoying his childhood.”

The proceeds from the sale of Kevin’s book will be used to assist him with the costly tri-annual examinations his son must have. The family does receive some assistance from the Wonder Fund, a US-based charity; however, Kevin says the costs are still high including airfare and accommodations, and other medical funds not covered by the charity. This July 17-26, Kylan travel to Florida to undergo EUA – examination under anaesthesia. Doctors want to examine his eye movements while asleep. He will be seen by a paediatric retina specialist and a vision development specialist for his follow ups. He will also be fitted for a new pair of glasses during the trip. Kevin says estimated costs for the trip and procedures are about $12,000.

Kevin is seeking public support for his book, which will be released and available in local book stores this month. Special thanks to the Cable Cares foundation, Bamboo Shack, Fidelity Bank, the President of West Virginia State University Dr. Anthony Jenkins, and Dr. Carlos Thomas, family and friends for helping Kevin’s book project become a reality. A book release event is planned for April 26 from 8am to 12 noon at the Disability Affairs Division, 8th Terrace, Centreville. However, books will be available for sale as early as this Friday. Kevin also encourages those wishing to assist to Kylan’s medical fund for ongoing treatment to contact him. For more information, call Kevin at 448-3863 or email kevin.cartwright219@gmail.com.