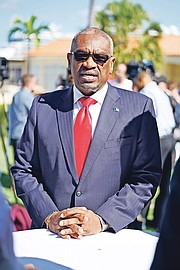 PRIME Minister Dr Hubert Minnis yesterday restated his administration’s commitment to “correct” issues regarding gender inequality in the transference of citizenship, as promised in 2017.

He did not directly address observations the current draft Nationality, Immigration and Asylum Bill, 2018 does not close gaps between men and women on nationality matters, but instead offered that public consultation on the bill was essential.

“I think in a modern and transparent society it’s essential that the citizens have their input because at the end of it, you’ll have less friction in passing such a legislation,” he told reporters on the sidelines of an IDB loan signing.

“We’re looking at all the entities,” he said when asked about gender equality, “but we know what had happened in the referendum. I think we need to correct those issues and those are matters we have said, we will look at, we will correct, and we made the commitment we will do it.”

The Minnis administration in 2017 promised to amend the Bahamas Nationality Act to redress the constitution’s citizenship inequities –– giving Bahamian women the right to automatically transfer citizenship to their children regardless of where their child is born.

Last week Mr Mitchell, former minister of immigration, said nothing in the draft bill appears to change the status quo on how citizenship is granted.

Meanwhile, Rights Bahamas president Stephanie St Fleur yesterday suggested citizenship applicants should be compensated by the Department of Immigration for missing documents or lost files as she amps up efforts to organise and educate “citizens-in-waiting”.

She reserved full comment on the draft bill as she was part of a stakeholder group reviewing the document, however, she underscored a staggering lack of accountability on the part of officials.

The immigration backlog drive was a personal initiative the activist started in 2014, when undocumented migrant children were unable to access public schools due to the advent of the belonger’s permit policy.

At the time, she issued a call for parents to contact her for assistance in writing followup letters to the Department of Immigration for applicants who had seemingly fallen through the cracks.

“I have some people who have applied from 2005,” she said, “probably even earlier than that, who haven’t received any word or information from the Immigration Department. We’re really thoroughly looking at the new bill, and my concern is they want to propose it but what about people who applied?

“Because there was a list that came out that people needed to come in whose documents were lost or files not completed, but when I applied at (Department of) Immigration when I was 18 for citizenship, they gave me a receipt.

“That receipt confirmed that everything they asked of me I presented to them, so those people holding those receipts means that immigration has their file and everything needed is there.

Ms St Fleur said her team is now focused on providing education and support to children aged 16 to 19, who have a right to apply for citizenship.

“We want them to start early,” she continued, “certain documents we know they cant get. We’re targeting the children because they need to educate their parents. Sometimes a lot of people go to the department and because of the language barrier there are so many errors. We’re doing a drive not just for them to apply early but for certain documents that don’t expire they can start working on it now.”

The proposed new bill the PM speaks of is unconstitutional and he knows it.

It is obvious from the remarks of Rights Bahamas president Stephanie St Fleur that our country is under siege. HMS Bahamas has taken on too much water, is severely listing and could now sink all too fast at anytime.

It seems the corrupt political elite in our country will not stop their foolishness and nonsense until they see the Haitian flag replace the Bahamian flag at the top of the flag pole at Government House. They should be getting on with a systematic deportation policy and break all diplomatic ties with Haiti if the Haitian government resists taking back their own people who are in our country illegally. And if this upsets the U.S. State Department, then Uncle Sam should be called on to find a home for these so called "stateless" people somewhere in the U.S. They certainly have a hell-of-a-lot more land and resources than we do to accommodate them.

Minnis is quoted in the above article as saying:

"The Minnis administration in 2017 promised to amend the Bahamas Nationality Act to redress the constitution’s citizenship inequities –– giving Bahamian women the right to automatically transfer citizenship to their children regardless of where their child is born."

By his own admission the bill seeks to address citizenship inequities in our revered Constitution that can only be be addressed by a constitutional referendum. Parliamentarians do not get to determine who is entitled to apply for and obtain Bahamian citizenship. That right is exclusively reserved under our Constitution for the Bahamian people themselves to determine in a duly held referendum on proposed amendments to that most venerated of all of our country's governing documents. And we voted on these very same matters in a constitutional referendum held not too ago. The fact that Minnis did not like the outcome of that referendum held under the last Christie-led PLP government does not give him the right to seek the outcome he would have preferred by way of the wrongful enactment of an unconstitutional bill. Just who does this arrogant man think he is, trying to usurp the powers of the Bahamian people under their own Constitution?!

YOUR HATE HAS BLINDED YOU THERE SIR. . .I KEEP TELLING YOU GO READ FIRST. . .THEN USE THAT MACHINE GUN UNDER YA NOSE. . .WHAT BILL YA TALKING ABOUT OYGA?

YOON READING AND TALKING AGAIN DEAR SITE COMRADE. . .THIS BILL IS THE MOST CLEAREST AND TO THE POINT WE EVER HAD. . .ONE THE PRIVY COUNCIL WILL NOT BOTHER WITH. . .ONCE AND FOR ALL. . .THIS ONE TAKING NO PRISONERS. . .DON'T MIND WHAT ANYONE SAYS. . ."SHE SOLID AS A ROCK".

Now please go read the bill. . .and while ya at it. . .read the constitution. . .please. Only if you learn to engage that brain ya have there with good sound knowledge. . .nobody around this site will be able to beat you. . .you already have the most flexible brain "speed" here. . .mix that with good knowledge and "yoise" the boss!!

By attrition, the Bahamas is officially the first colonial outpost of Haiti!