‘There’S Been A Vast Improvement In Treatment Of Transgender People’ 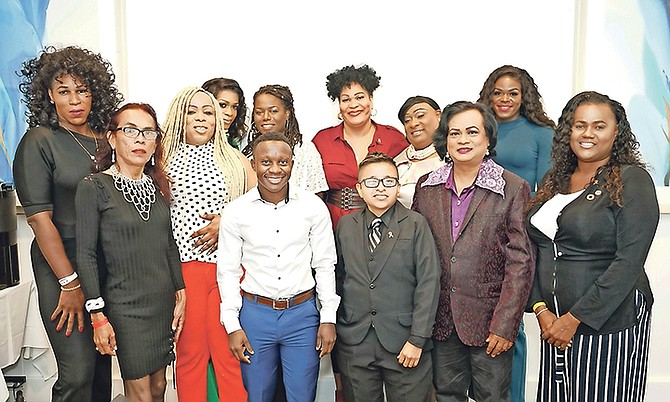 THERE has been a “vast improvement” in the general treatment of transgender Bahamians, a local advocate for the community said yesterday, adding however that more still needs to be done in terms mental health services and other areas.

In an interview with The Tribune yesterday Alexus D’Marco, lead spokesperson of the D’Marco Group and the newly launched United Caribbean Trans Network (UCTrans), pointed to a formalised education campaign and wider social awareness as the two major reasons behind the “shift in the culture” across The Bahamas.

Referring specifically to several ongoing discussions on ways to improve legal frameworks and health policies that presently discriminate against trans Bahamians, Ms D’Marco said the Bahamas was now “setting the pace” for “inclusion and understanding”.

“There is a vast improvement,” she said. “As far as respect for trans persons goes, and how they identify in The Bahamas, people are now realising and understanding that there is a difference between sexual orientation and gender identity.”

Ms D’Marco said a streamlined education strategy alongside a steered public discussion on the transgender lifestyle has aided an overall campaign of understanding. She said based on this education, there has been a shift in culture.

To that end, Ms D’Marco said local trans persons are “blessed” to sit at the table with local “decision makers and gatekeepers,” namely the Office of the Attorney General with whom discussions concerning rights, protections and avenues to communicate perceived bias or oppression have been had.

“For them to open their door to us is a step in the right direction because back in the past you wouldn’t have had that,” Ms D’Marco said. “I think we are moving and progressing slowly, but we are making some headway.

“We have our seat at the table,” she added.

In line with this, Ms D’Marco said yesterday her organisation was at the “beginning stages” of a policy document that could end discriminatory practices against trans Bahamians.

She explained: “Well, now that we are able to document human rights violations against persons living in the Bahamas, I think there is more accountability for those persons and they are aware that mechanisms are in place to protect them. So for us, we are now able to document our experiences and formalise a document that says, on one side, ‘we should have this,’ and on the other, ‘but we are only getting this.’”

Ms D’Marco added: “That is where the complete change will come. So the stigma and discrimination is still a thing, but there is now documentation of it, so people are now more hesitant to do something, or attack, or put us in fear. We are taking the necessary steps to not only recognise our rights as global citizens, but to point out where and how we are being discriminated and causing change.

“It’s the same with healthcare. We’ve seen so much improvement in recent years, but that started with us saying to our government that we are here and that we do have needs that ought to be addressed.

“As it stands now, we are at the page where the government has acknowledged that trans persons do exist in The Bahamas…that now links us to specialised programmes and treatments that we may need. We aren’t being pushed into some dark little corner.

“You see, that link has streamlined our relationship with national healthcare programmes like the one for HIV under the auspices of Dr Nikia Forbes, where trans Bahamians are able to access medications and treatment in a discrimination free environment.

“So while these linkages are closing the gaps on the physical health side, we are now making the push for the further standardisation of mental health components to afford trans people the access to therapy,” she asserted.

Ms D’Marco continued: “We need to, as a country, take mental health more seriously. But for the sake of my discussion, we need more avenues for trans persons to have access to adequate mental treatment and not feel scorned or pushed aside. For a trans person who is undergoing reassignment surgery or affirmation of who they are, those services aren’t here. These persons have to go abroad or find these services online.

“We are now to the point where we need to have an in-country doctor or an in-country psychologist that can provide these forms of therapy and treatment. We are finding our allies and bridging those gaps as we speak, but there is a lot more that can be done from a government standpoint,” she added.

According to Ms D’Marco the number of trans Bahamians presently “self-identifying” have increased in recent years. In addition to that, many of those persons opted to seek asylum in other countries in pursuit of more standardised rights and services.

Clarifying this aspect, Ms D’Marco said her organisation was pushing to make these rights and services “basic” in The Bahamas.

“Those who are left, they are fighting the cause for those that are coming behind us; the generation that is to come. We don’t want them to go through the violence, the abuse and the discrimination. We want them to have that peace,” she said.

“They deserve that. They should have that right to live in peace and be comfortable to be who they are. There should be things in place, and as a citizen of this country it is their right to have it; and where it doesn’t exist, we will demand it.”

We are told by these types of groups that we need to become a much more tolerant society. Does that mean as Christians we must throw away our belief in the Bible? Many Bahamians just cannot help but think of Sodom and Gomorrah which were synonymous with impenitent sin and which by their fall became the supreme manifestation of divine retribution. These simple facts will no doubt get the louder tongues among us to wag.

No you do not have to throw away your belief in the bible. You just have to do as Christ says...Love your neighbor as you love yourself. You don't have to like what is going on but you do have to respect persons choices. We are all God's children and He has unconditional love for us all. There are a lot of people who say they are Christian but they don't live in God's truth.

I am tired of these juvenile arguments. Love does not mean acceptance or tolerance of a deviant behavior. Loving a child does not equate to accepting anything they choose to do. You speak of God loving men, but what about men loving God which means obeying His commands. It is not His command to believe a lie in place of the truth, which is what transgender people do. Male and female He created them.

A mental illness is any disturbance in thought, feelings or behavior. Common sense, biology and genetics confirm that there are only two sexes. The mind can create a great deal more, and that is what we are seeing here a mental perversion of the normal. When a persons thoughts do not line up with objective reality (their biology or anatomy) they have a mental illness. Only those who lack the capacity for critical thought can be convinced of the propaganda that says otherwise. God is love, but He is also truth and the truth is He could not and did not make such aberrations as a man who thinks he is a woman for it would be unjust to make such and then judge them for their deviance!

By the way even in cultures that don't believe in God they have enough sense to know that men are not women and women are not men! It is nothing but propaganda for social conformity to LGBT values that is driving this madness!

I read your commentary and pose these question to you: As you consider that trans people are mentally ill based on this definition of mental illness, do you consider that this can be said the same about you regarding your religious beliefs and construct? Don't you think that one can also say - "Only those who lack the capacity for critical thought can be convinced of the propaganda that says otherwise" regarding your religious beliefs? And lastly, how is it that you derive that trans people don't believe in God or a God?

On the surface your questions seem interesting, but they conflate unrelated issues. Let me explain. With transgender people we are talking about subjective and objective realities. In other words a person cannot say that an apple is a squash just because they feel so. An apple and a squash are not the same morphologically, genetically, physiologically etc. So regardless of ones subjective feelings about an apple, an apple is an apple and cannot be called a squash, if you get my meaning. To insist or rather to believe that it is means there is something wrong in the reasoning faculties. That is why transgenderism is a mental illness despite the activism and endorsement of several medical organizations.

The question about belief in God is a completely different matter because you must realize that it is possible for something to exist outside your current sphere of knowledge. God is a spirit and cannot be apprehended or understood by the mind or reason solely. Man is a spirit that lives in a body and has a mind with reasoning faculties. God is revealed in a mans spirit, that brings understanding to a mans mind, so God has to be revealed not intellectualized.
In other words you cannot use a microscope to detect radiation because it is the wrong tool to use for that specific purpose. This is why intellectuals often have a problem with the reality of God. They are using the wrong tool (the mind or reason) to try and understand a reality that can only be detected (understood) with the spirit. I hope you can understand the difference.

Lastly, I never said that trans people do not believe in God, they may, but are not making an effort to obey what He says by their stubborn insistence against His ordinances!!!

Hey, joeblip, you write: "Common sense, biology and genetics confirm that there are only two sexes.". Take the time to look up hermaphrodite in a dictionary. Sigh.

Forget the dictionary consider using an actual scientific text! You should be aware that we are talking about humans and not slugs here. Genetic variations where both genitalia may be displayed is not true hermaphroditism, since they are incapable of self reproduction!

BTW the vast majority of those claiming to be transgender are NOT displaying the anatomic features of hermaphrodites.

You all are so right about mental health issues because all of you have allowed the devil to fool you and convince you that GOD made a mistake with his greatest creations, that being MALE and FEMALE human beings and since you all think that he was wrong with what gender you were born, then the entire lot of you are gonna be in for a huge surprise on judgement day. The purpose of the TWO DIFFERENT GENDERS is for procreation to perpetuate the human race and regardless of what weak argument you all generate to support your misconceptions about mankind will not change who you all were born as irrespective of what YOU CHOOSE to identify your selves as or what you look like now !!!

Hey, pawbahamian. And your God's purpose in creating hermaphrodites was what please?

Well since you seem to be operating at that level you would be the best one to explain that !!!

Hey hrysippus you seem to be losing your arguments. Step it up man/woman/both/neither!