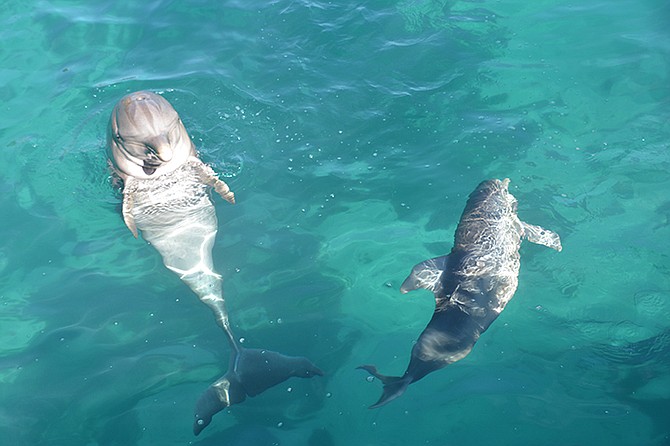 Duchess swims around with her mother, Princess. 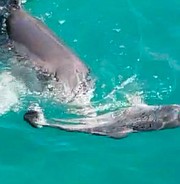 AN Atlantic bottlenose dolphin calf named Duchess is the “newest member of the family” at Blue Lagoon Island.

Her mother, Princess, at age 52 is one of the oldest known dolphins in captivity around the world. Duchess’ father is Stormy.

According to a press release, Duchess was born in the all-natural habitat on Blue Lagoon Island on November 21, 2018. The marine mammal team was able to confirm her gender a few weeks after her birth and has been monitoring her health and progress daily.

“She’s a very pretty little dolphin,” said George Rodgers, Blue Lagoon Island’s zoological director. “As with people, they all look different, believe it or not. And she’s a very good looking little dolphin. Perfectly formed. Weight distributed exactly where it should be. Very active, energetic, all the signs are good. She will continue to nurse from her mother for quite some time yet.”

Dolphin calves are similar to human babies in that that they are not born with survival skills to fend for themselves and rely on their mothers who teach them everything they need to know, starting with the first lesson immediately after birth, which is how to swim to the surface to breathe, Blue Lagoon said.

Mr Rodgers says Princess, who has now had four boys and two girls, is a great mom.

“She’s never happier than when she’s got a calf. She really is an excellent, excellent mother and Duchess is coming along really quickly as a result of her mother’s experience,” he explained.

Already the young calf is mimicking her mother and the other dolphins she lives with and is flipping – and sometimes flopping – out of the water, playing with any fish thrown her way, and in general exploring her world.

Mr Rodgers explained that at birth, a dolphin calf’s flippers and fins are extremely soft, “but they begin to get strength, they begin to learn to swim, to become more independent and then they begin to experiment like children when they begin to walk. They’re clumsy at first. They flip around. But they enjoy it. So they start jumping more and more and as I say, they have the adults as an example to copy from. It doesn’t take long before they perfect the technique.”

Duchess and Princess will remain a close pair for at least another year and a half as Duchess is nursing, Blue Lagoon said.

Atlantic bottlenose dolphins do not experience menopause, so as long as they are healthy, well cared for and living in pristine conditions, they can give birth and rear calves at an advanced age, the marine park noted.

The dolphins at Blue Lagoon Island have a preventative medicine programme, veterinary care onsite, high quality food and diets that are analysed and modified for their individual needs and tastes, as well as vitamin supplements and a highly qualified team to care for them, the press release said.

To ensure that the marine mammal programme at Blue Lagoon Island continues to provide the highest level of care and conditions for its dolphins, sea lions and stingrays, the company maintains a number of key international accreditations including the Alliance of Marine Mammal Parks & Aquariums and the International Marine Animal Trainers’ Association, it was noted.

In 2018, Dolphin Encounters at Blue Lagoon Island became the first facility in the Bahamas to achieve certification by the American Humane Conservation programme.

“They inspect us. And we have to satisfy them that our animals have the best possible care... that they come first in everything we do. They’re completely independent and non-profit. They are only interested in animals’ welfare. And yes, we were the first in the Bahamas and we’re amongst the handful of zoological facilities at the moment worldwide that do have this accreditation,” Mr Rodgers explained.

Duchess is the 21st of the 25 dolphins at Blue Lagoon Island to be born under the care of the marine mammal team.

According to the company, Dolphin Encounters got its start in 1989 as an “act of compassion” when the company’s founder learned that there were two dolphins living at an aquarium in Nassau that had gone out of business. He decided to buy them and give them a better home at his property in Abaco. A few years later they relocated to their current all natural habitat on Blue Lagoon Island. Princess is one of those founder dolphins.