Migrants Held After Sloop Ran Aground 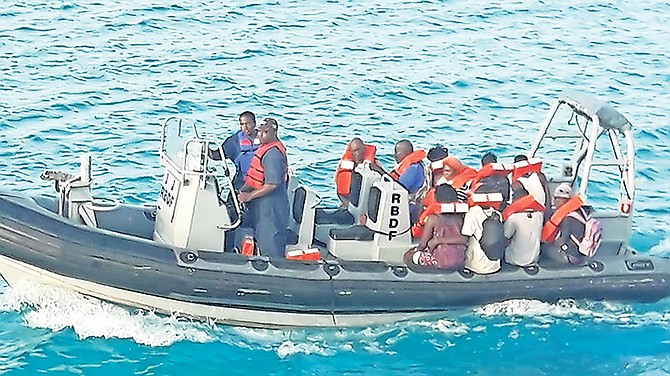 In a statement yesterday, the RBDF indicated that officers onboard HMBS Durward Knowles, acting on information received, located and apprehended a 35-ft Haitian sloop off the southern coast of Little Inagua.

A subsequent statement from the Department of Immigration noted officials were told a vessel had ran aground near Little Inagua with possible people on board. Officials also noted that a further search of the island and surrounding area led to the apprehension of the migrants — 32 males, seven females and one minor — all of whom appeared to be in good health.

The migrants were taken into custody and transported to Mathew Town, Inagua where they were turned over to Department of Immigration officials for further processing.

With this latest apprehension, over 300 Haitian migrants have been apprehended by the RBDF across several separate incidents, according to the force’s records.

Those apprehension were followed by a third incident where 108 Haitian migrants were found on Saturday, January 5, and another 64 in the Exuma chain on Saturday, February 16.

These numbers do not reflect apprehensions by other law enforcement agencies this year.

Conversely, the Department of Immigration has processed, prosecuted and deported of hundreds of Haitian nationals in recent months.

where is rights Bahamas in all of this?? I suppose they say the more the merrier.

They wanna go to the US? Let em fix their boat and send them on their way. We need to stop paying for the US' immigrant issues. Do like Mexico. Let em go thru ..

Wid ya sentiments....BUT.....Uncke Sam been invaluable in assisting to apprehend dese illegal human trafficing to Bahamas.........AND.....da Bahamian top been falsely telling the people that these illegal human migrants on sloops were destined by sloop to US.......fully commonsense sloops heahing up Tongue of the Ocean are pointed to Nassau in dere path...!!!!....an if passed hav to go past Andros / Nassau furtherother islands Chub...Berry..BInimi...IF ....TOP IN CHARGE .......knows if dese Sloops illegal Haitins destined for US.......den they would head past Ragged Island to uninhabited Cay Sal into Florida Straights to land .....uncommon....and ..knowing they would be caught.on Florida beach.....!!!!!!!.......dese Bahamian officials were misrepresenting....talking fallacy....or dont know Bahamian map...

If you're on a wooden sloop in open seas common sense says you'd stay close to land in case something goes wrong, so I gots to disagree with you. Common sense also says if you want a better life you'd head to the US and not to crime ridden, Haitian hating Nassau....